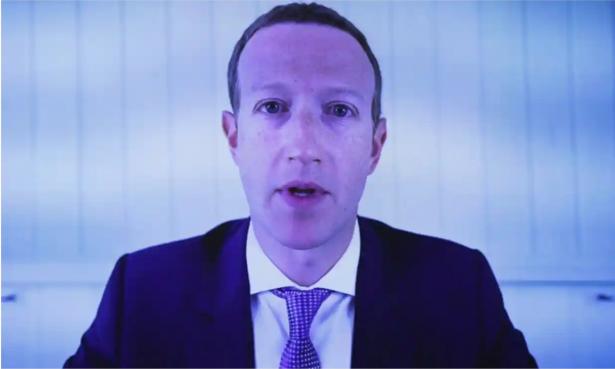 ‘Mark Zuckerberg had to confront his own emails in which he noted that Facebook’s purchase of Instagram was done to buy out a competitor.’ , Getty Images

"Our founders would not bow before a king, we should not bow before the emperors of the online economy.” That’s how Congressman David Cicilline started the remarkable hearing on Wednesday in the antitrust subcommittee, where four tech CEOs – Tim Cook of Apple, Mark Zuckerberg of Facebook, Sundar Pichai of Google, and Jeff Bezos of Amazon – finally had to answer questions about how their businesses operated. And the answers they gave weren’t pretty. The word both Republicans and Democrats used to describe their corporations was dominance, and as members unspooled the evidence they had collected in an investigation over the past year, it’s easy to see why.

Almost any moment of the four-hour hearing offered a stunning illustration of the extent of the bad behavior by these corporations. Take Amazon, whose CEO, Jeff Bezos, often seemed off-balance and unaware of his corporation’s own practices. Congresswoman Lucy McBath played audio of a seller on Amazon tearfully describing how her business and livelihood was arbitrarily destroyed by Amazon restricting sales of their product, for no reason the seller could discern. Bezos acted surprised, as he often did. Representative Jamie Raskin presented an email from Bezos saying about one acquisition that: “We’re buying market position not technology.” Bezos then admitted Amazon buys companies purely because of their “market position”, demonstrating that many of hundreds of acquisitions these tech companies have made were probably illegal.

Mark Zuckerberg had to confront his own emails in which he noted that Facebook’s purchase of Instagram was done to buy out a competitor. His response was that he didn’t remember, but that he imagined he was probably joking when he wrote that. One congresswoman on Joe Biden’s vice-presidential shortlist, Val Demings, asked Zuckerberg why he restricted Facebook’s tools for competitors like Pinterest, but not for non-competitors like Netflix. He had no answer. Congressman David Cicilline asked about Facebook promoting incendiary speech and making money off advertising sold next to that speech. Zuckerberg pivoted to free speech talking points, and Cicilline cut him off, “This isn’t a speech issue, it’s about your business model.”

Big tech’s dominance has serious consequences. America has lost thousands of media outlets because of the concentration of ad revenue in the hands of Google and Facebook; two-thirds of American counties now have no daily newspaper. The nation lost 100,000 independent businesses from 2000 to 2015, a drop of 40%, many due to Amazon’s exploitation of legal advantages from the avoidance of sales tax to its apparent violation of antitrust laws in underpricing rivals. Hundreds of thousands of merchants now depend on Amazon’s platform to sell goods, and Amazon has systemically hiked fees on them. Just a few years ago these third-party merchants paid 19% of their revenue to Amazon, now it’s up to 30%, which is, coincidentally, the amount Apple demands from hundreds of thousands of app makers who have to reach iPhone users. It’s no secret why small business formation has collapsed since the last financial crisis; these giant platforms tax innovation.

And then there’s the fear. I have reported on small and medium-sized businesses frightened to come forward with stories of how they are abused by counterfeiting or unfair fees by the goliaths. As one told me about his relationship to Amazon, “I’m a hostage.”

Fortunately, the voices of small businesspeople afraid of retaliation came through their elected leaders. “I pay 20% of my income to Uncle Sam in taxes, and 30% to Apple,” one member of Congress noted she heard from businesspeople. Representative Ken Buck, Republican from Colorado, talked about one of the few courageous businesspeople who testified openly months ago, the founder of PopSockets, who had been forced to pay $2m to Amazon just to get Amazon to stop allowing counterfeits of its items sold on the platform. Another Republican representative, Kelly Armstrong, went into the details of Google’s use of tracking to disadvantage its competitors in advertising, joined by Democrat Pramila Jayapal, who asked Google’s CEO why the corporation kept directing ad revenue to its own network of properties instead of sending ad traffic to the best available result.

Over and over, the CEOs had similar answers. I don’t know. I’ll get back to you. I’m not aware of that. Or long rambling attempts to deflect, followed by members of Congress cutting them off to get answers to crisp questions. I learned two things from the surprisingly wan responses of these powerful men. First, they had not had to deal with being asked for real answers about their business behavior for years, if ever, and so they were not ready to respond. And two, antitrust enforcers for the last 15 years, stretching back to the Bush and Obama administrations, bear massive culpability for the concentration of wealth and power in the hands of these corporations. The emails and information that Congress dug up were available to these enforcers, who nonetheless approved merger after merger, and refused to bring complaints against anti-competitive behavior.

It’s rare to see Congress cover itself in glory, but believe it or not, that’s what happened. While a few Republicans, like ranking member Jim Jordan, spent the hearing yelling about the supposed persecution of conservatives on social media, most of the subcommittee focused on genuine business problems. Even most Republicans focused on anti-conservative bias recognized that the ability to constrain conservative voices originated as a function of market power.

As David Cicilline put it: “These companies as they exist today have monopoly power. Some need to be broken up, all need to be properly regulated and held accountable.” And then he quoted Louis Brandeis, who said, “We can have democracy in this country, or we can have great wealth concentrated in the hands of a few, but we can’t have both.”

Matt Stoller is the author of Goliath: The 100-Year War Between Monopoly Power and Democracy