More jobs are disappearing for good, dashing hopes of a rapid economic rebound. 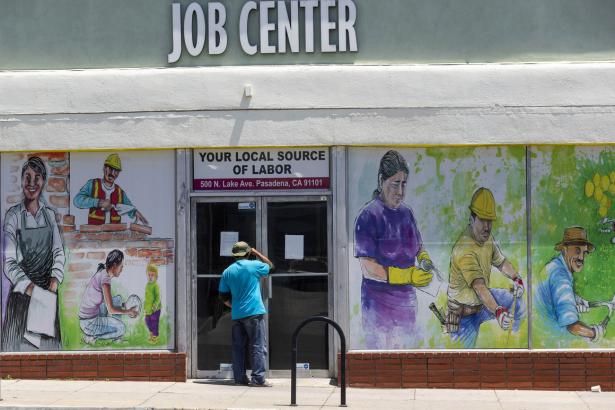 A person looks inside the closed doors of the Pasadena Community Job Center in Pasadena, Calif., during the coronavirus outbreak, AP Photo/Damian Dovarganes

Tens of millions of Americans have lost their jobs in the coronavirus recession, but for many of them the news is getting even worse: Their positions are going away forever.

Permanent losses have so far made up only a fraction of the jobs that have vanished since states began shutting down their economies in March, with the vast majority of unemployed workers classified as on temporary layoff. But those numbers are steadily increasing — reaching 2.9 million in June — as companies start to move from temporary layoffs to permanent cuts. The number is widely expected to rise further when the Labor Department reports July data on Friday.

Workers themselves are growing increasingly pessimistic as the permanent losses spread beyond the service industry to occupations like paralegals and financial analysts who weren’t initially affected by the shutdowns. Nearly half of American families whose households have seen a layoff now believe that job is probably or definitely not coming back, an AP-NORC poll found late last month. That marks a steep drop from the April survey, which showed nearly four in five respondents expecting their job loss to be temporary.

The rise in permanent job loss is the latest signal that the economic damage from the coronavirus is likely to be long-lasting, and that the Trump administration’s dream of a quick, V-shaped recovery is at odds with what workers are seeing across the country. That could create the need for even more government spending and long-term solutions beyond the temporary fixes that Congress has been debating.

“This recession has been really confused, because what we had was really a suppression where we told everybody to stay home — and that wasn’t really job loss,” said Betsey Stevenson, a former chief economist at the Labor Department and a member of the Council of Economic Advisers during the Obama administration. “The real question is, when you end the suppression, how many jobs are left? And boy, it sure looks like we lost a whole lot of jobs.”

Permanent layoffs have already begun spreading beyond industries directly affected by the pandemic. Nick Bunker, the director of economic research with the Indeed Hiring Lab, found that while permanent losses were concentrated in April in service-sector occupations that have been the hardest hit — waiters and retail salespersons, for example — they had spread by June throughout the labor market.

The trend appears poised to get worse. The number of Americans applying for unemployment aid has risen in recent weeks after months of steady decline, as the coronavirus surges across much of the country and a majority of states have either paused or reversed reopening plans. Another 1.2 million workers filed a new unemployment claim last week, the Labor Department reported on Thursday, marking the 20th consecutive week that applications have risen above 1 million. More than 32 million people are receiving either state or federal unemployment benefits, according to the most recent data.

Layoffs taking place now are more likely to be permanent rather than a temporary furlough. A Goldman Sachs analysis from July 31 found that 83 percent of job losses since February had been deemed temporary. But of all new layoffs in July in California, which it used as an example, only 35 percent were temporary.

“What’s happening now is more companies that thought they could survive are giving up,” said Nicholas Bloom, an economics professor at Stanford. “The most painful time to lose your job may well be coming up.”

The permanent losses hold greater weight than temporary layoffs, economists say, because they are far more likely to lead to long-term unemployment that would prolong any economic recovery. While a furloughed worker is likely to get his or her job back as soon as consumer behavior returns to normal, a permanently laid-off worker has to wait for an employer to create a new job, then apply and get matched with the right one.

“That’s what recessions are made of — that’s why they are so costly. That’s why they take so long to clean up,” said Adam Ozimek, chief economist at Upwork, a platform that connects businesses with freelancers.

Workers who remain unemployed over the long term end up increasingly less likely to return to the labor market for a number of reasons: Their skills may erode; they may lose motivation or employers may discriminate against them, Bloom said. Even after returning to the labor market, they could see effects like lower pay that linger throughout their careers.

“The reason that’s important from a macro perspective is, if you have this army of long-term unemployed, it becomes almost impossible to have a rapid rebound,” said Bloom, who co-authored a study in May that found that 42 percent of recent layoffs were likely to become permanent.

Economists argue the growing trend toward permanent job losses highlights a need for further federal spending to support laid-off workers, to keep consumer spending close to normal levels and to help small- and medium-size firms in particular weather the shutdowns. 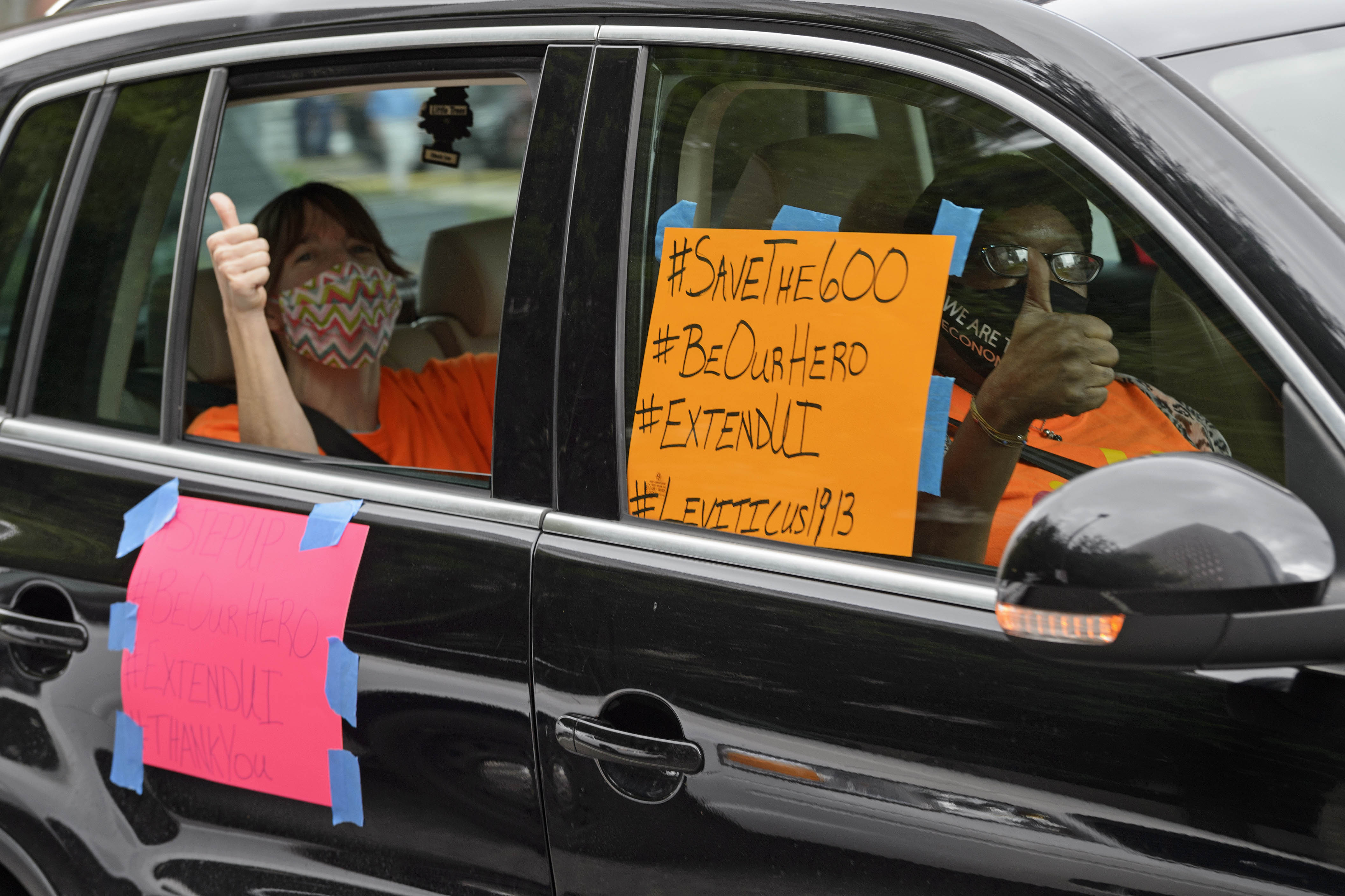 Motorists take part in a caravan protest in front of Senator John Kennedy's office at the Hale Boggs Federal Building asking for the extension of the $600 in unemployment benefits to people out of work because of the coronavirus in New Orleans, La. Wednesday, July 22, 2020. | Max Becherer/The Advocate via AP

Without more aid, business closures are likely only to increase, in turn keeping unemployment high. A recent Goldman Sachs survey found that 84 percent of business owners who had received loans under the Paycheck Protection Program said they would exhaust the funding by this week. And only one in six reported being “very confident” they would be able to maintain their payroll without further aid.

As more businesses close, it also becomes harder to restart the economy once consumer demand does start to return because there are fewer places for people to spend their money.

Even when consumers want to go out to eat or travel again, “That’s going to take a long time to turn into job benefits if you’ve had massive amounts of small business closures there,” Ozimek said.

Regardless of whether the July data shows the headline unemployment rate rising or falling for the month, the share of permanently unemployed workers is likely to continue to rise, complicating the administration’s touting of what President Donald Trump has previously called a “rocket-ship” economic recovery. And it underscores that even if states begin to reopen their doors in the near future, any return to normal for the labor market is likely years away.

“So are we moving in the right direction? I think not,” said Stevenson, now a professor at the University of Michigan. “I think most people went home from work in March, April or May and thought, ‘Surely they’re going to bring me back to work.’ And what’s happened is fewer of them were brought back than were expecting it.”

Megan Cassella is a trade reporter for POLITICO Pro.

Before joining the trade team in June 2016, Megan worked for Reuters based out of Washington, covering the economy, domestic politics and the 2016 presidential campaign. It was in that role that she first began covering trade, including Donald Trump’s rise as the populist candidate vowing to renegotiate NAFTA and Hillary Clinton’s careful sidestep of the Trans-Pacific Partnership.

A D.C.-area native, Megan headed south for a few years to earn her bachelor’s degree in business journalism and international politics at the University of North Carolina at Chapel Hill. Now settled back inside the Beltway, Megan’s on the hunt for the city’s best Carolina BBQ — and still rooting for the Heels.