What Is the U.S.-Mexico Border to Indigenous Peoples Who Have Lived There?

For Indigenous peoples of the Americas, the U.S.-Mexico border is increasingly a symbol and tool of genocide.

August 10, 2020 Christina Leza Yes! Magazine
Printer friendly
What Is the U.S.-Mexico Border to Indigenous Peoples Who Have Lived There? Published August 10, 2020 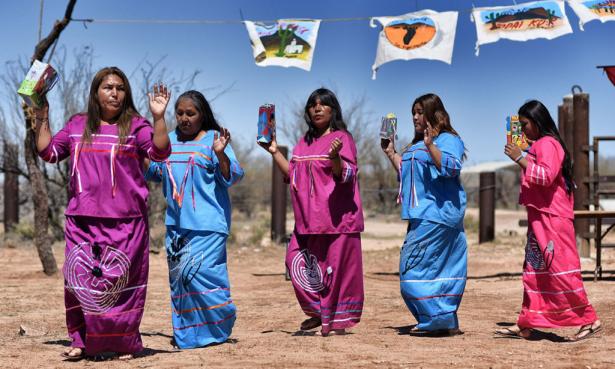 Indigenous people from the Tohono O’odham ethnic group dance and sing on March 25, 2017, to protest against U.S. President Donald Trump's intention to build a new wall in the border between Mexico and United States., Pedro Pardo/AFP/Getty Images

When this border was created, Indigenous peoples of the region were divided, including the Yaqui, O’odham, Cocopah, Kumeyaay, Pai, Apache, and Kickapoo. These peoples are represented by 26 sovereign tribal nations in the United States with tribal relatives residing in Mexico. Indigenous peoples tend to understand and talk about the U.S.-Mexico border in different terms from those who understand the border to be an agreement between governments, often describing the border as artificial or “imaginary.”

Several international legal instruments, including the United Nations Declaration on the Rights of Indigenous Peoples (UNDRIP), confirm the right of Indigenous peoples to maintain connections to their homelands and peoples across international borders. Some Indigenous groups such as the Lipan Apache have pursued actions to address rights violations through the U.N. reporting system. International human rights law, however, is not now recognized as binding for decision-making in U.S. courts.

Throughout my decade-long field research on grassroots Indigenous border activism in the southern Arizona region, the usefulness of international Indigenous rights for ensuring rights at the local level was one area of debate among activists.

Given the sovereign status of U.S. tribal nations, the U.S. Department of Homeland Security has established some general policies and practices to facilitate border crossing for Indigenous peoples of the U.S.-Mexico border region. The only fully formalized policy for southern border crossing, however, is a mandate that tribes develop and make use of Enhanced Tribal Cards, tribal identification cards that include security technology to confirm the tribal enrollment and citizenship status of U.S. tribal members.

A number of grassroots Indigenous organizations such as the Indigenous Alliance Without Borders, O’odham Voice Against the Wall, and Indivisible Tohono are working in the U.S.-Mexico border region to raise consciousness about the negative impacts of current border enforcement policies on Indigenous peoples, and to work for new policies that recognize the rights of Indigenous peoples within their homelands. Since 1997, the Indigenous Alliance Without Borders has provided support to and advocated for the border rights of Indigenous groups throughout the border region.

The Indigenous Alliance has long advocated for the development of comprehensive legislation that would address Indigenous border rights at both the Canada-U.S. and U.S.-Mexico borders, and has envisioned summits that include both tribal government and grassroots community leaders. Recent tribal border summits in Tucson, Arizona, organized by the Pascua Yaqui Tribe, the Tohono O’odham Nation, and the National Congress of American Indians are building toward this vision. The Indigenous Alliance has also advocated for the adoption of the United Nations Declaration on the Rights of Indigenous Peoples by U.S. tribal governments on the U.S.-Mexico border to help build a common reference for Indigenous border rights.

While Indigenous leaders work to address issues they face with U.S.-Mexico border policy, Indigenous members must continue to grapple with the everyday impacts of increasing border enforcement, including the growing presence of Border Patrol and surveillance technology on reservation lands, as well as the disruption of their lands by border barrier construction.

“The effect of a wall is already in us. It already divides us… . It’s a psychological wall,” says O’odham activist Mike Wilson, who is also concerned about increased border barrier construction. That psychological wall has devastating impacts “that many will not realize until generations to come,” he adds.

Given the U.S. government’s historical treatment of Indigenous peoples in the attempt to eradicate their rights and presence on U.S.-claimed lands, both continued Indigenous movement and widespread public support are needed to help rectify the physical, social, and psychological harms caused by the “imaginary line.”