Sunless Shadows, Oskouei’s new documentary about a juvenile detention center in Iran, interrogates the experience of women in prison in Iran. 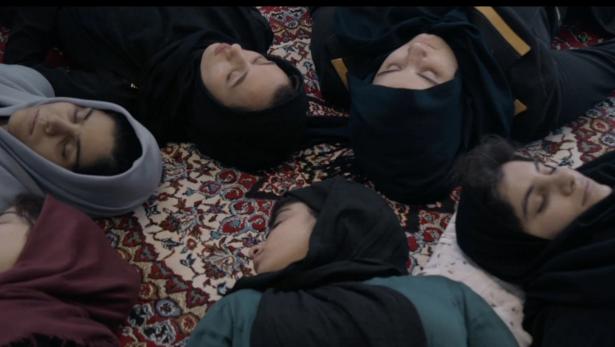 “Is it better inside prison or out?” the filmmaker Mehrdad Oskouei asks one of his subjects. She isn’t entirely sure how to answer. Life behind bars certainly has its restrictions. But then, so did her life on the other side of them. Eventually, she lands on an admission: “I’m more at ease here”—which is to say, on the inside, rather than on the outside. It’s a sentiment shared by a few of the teenage girls interviewed in Sunless Shadows, Oskouei’s new documentary about a juvenile detention center in Iran. Prison movies, fictional and not, have explored the attachment some inmates form to the rigid routines and boundaries of incarceration—and to the fear they sometimes express about what comes after release. But this is something different: an acknowledgement that, for many young women in Iran, prison may offer an escape from everyday horrors, to say nothing of the paradoxical freedom it affords them.

The girls sleep on bunk beds and share meals. They take classes, play charades, mold clay, and lie together on the floor during guided meditation sessions. At times, the center looks almost like a college dormitory, though the armed guards positioned above the barbwire fences shatter that illusion quickly. Oskouei catches few hints of abuse or violent conflicts erupting within this closed environment—which, of course, doesn’t mean they don’t happen when the cameras aren’t rolling. What he mostly captures is camaraderie and commiseration, the solace these girls have found in each other’s company, even as they reckon with the events that landed them there.

Oskouei is familiar with the milieu. His last film, the deeply affecting Starless Dreams, followed a different, slightly younger group of girls within the system. Like a lot of sequels, Sunless Shadows sometimes plays a little like retread, covering much of the same emotional and sociological ground as its predecessor. But the filmmaker has narrowed his focus; this time, all of his subjects are doing time for the same crime: the murder of a male family member. One girl poisoned her sister’s abusive husband. Several others killed their fathers. Many were charged as accomplices and have mothers on death row; occasionally, the film’s interest shifts to the complicated issue of pardons—some of the thousands awaiting execution are unceremoniously released, with reprieve granted after the payment of Diya (a.k.a. blood money) or the official forgiveness of male relatives. (Even in the matter of state-sanctioned justice, these women are often at the mercy of the men in their lives.)

There are talking-head scenes, too, the inmates sitting down to record prepared messages for their victims or coconspirators, speaking their hearts and minds into the camera. Though the format suggests confession, few of the subjects express anything quite as simple as remorse, even when acknowledging that they loved the men they killed. What becomes clear, in these direct addresses, is the general lack of recourse available to them. How many options did they have, really, when faced with a legal system that ignored their reports of violent domestic abuse or refused to grant a divorce without the consent of the husband, no matter how dangerous he was? In one of the most heartbreaking of the monologues, a woman speaks to the man she married and then murdered, remembering how she hoped he would be her escape from the pain inflicted by her parents, only to discover that she was merely passing from the frying pan into the fire. Through these episodes, Oskouei paints a vision of the patriarchy as a vicious cycle, its violence only endured or reciprocated.

Though the Errol Morris-style passages distinguish Sunless Shadows from Oskouei’s last movie, the film is perhaps at its most engaging when operating in the same manner as Starless Dreams: like a fly on the wall, observing the girls as they voice or momentarily forget their troubles. For all the hardship each of them has experienced, many remain teenagers, with that mixture of self-consciousness and performative flair that makes people their age such natural, ideal documentary subjects. Late in the film, the girls sit in a circle and have a frank, open discussion about their crimes and the morality of their actions, and the conversation is at once heartbreaking and, in its own small way, heartening. Here, in captivity, they’ve created a space where their grievances can be aired. Sunless Shadows beams them out into the world, which is justification enough for returning to this setting and those struggling within it.