"In Minnesota, we know that organized people will always beat organized money. Despite outside efforts to defeat us, we once again broke turnout records. Despite the attacks, our support has only grown." 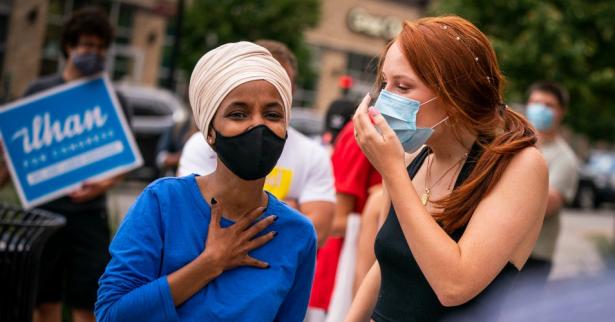 Omar, a Somali refugee and one of the strongest progressive voices in Congress, was leading Anton Melton-Meaux by a comfortable 18-point margin with 96% of precincts reporting when the race was called. Melton-Meaux was one of four candidates who attempted to oust Omar, but his campaign was by far the best-funded—according to the Center for Responsive Politics, large donations made up 90% of the $4.1 million he raised.

But Melton-Meaux's big spending—much of which was funneled through anonymous corporations—was not nearly enough to unseat Omar, who said her victory Tuesday amounts to a "mandate for change" from the people of Minnesota. Omar's win in the heavily Democratic district virtually guarantees she will retain her seat.

"Despite outside efforts to defeat us, we once again broke turnout records. Despite the attacks, our support has only grown," Omar wrote in a series of tweets late Tuesday. "This election isn't about me. It's about an agenda rooted in people’s everyday struggles—and the corporations and right-wing donors who are threatened by it."

"It's about standing up to a president who promised to ban an entire group of people from this country based solely on their Muslim identity, calls our countries of origin 'shithole countries,' and threatened to send us back to where we came from," Omar continued. "It's about standing up for the basic human rights around the world—and fighting a military-industrial complex that opposes the recognition of people's humanity and dignity."

Omar's victory was celebrated by her progressive allies in Congress and advocacy groups that backed her reelection fight. "Congratulations to Ilhan Omar, a leader of incredible courage, for winning her primary in Minnesota tonight," said Sen. Bernie Sanders (I-Vt.). "Americans want bold, progressive leaders like Ilhan in Congress, and together we will create a nation that works for all."

The youth-led Sunrise Movement tweeted that Omar—a vocal supporter of the Green New Deal, Medicare for All, and other big-ticket priorities—has "been a bold and progressive leader since she stepped foot Congress and we couldn't have been any prouder to support her in her re-election."

"Congratulations Ilhan," the group added, "we can't wait to keep fighting alongside you."

With Omar, Rep. Rashida Tlaib (D-Mich.), and Rep. Alexandria Ocasio-Cortez (D-N.Y.) having vanquished their primary challengers and Rep. Ayanna Pressley (D-Mass.) running unopposed next month, "The Squad" is poised to secure at least another two years in Congress. Dave Wasserman of the Cook Political Report noted that "so far, the three members of The Squad who have faced 2020 primary challenges have prevailed by a combined 201,235 votes to 105,993 votes."

"Despite all the manufactured hype and money spent attacking them, The Squad is winning, it's growing, and is here to stay," advocacy group Justice Democrats tweeted, alluding to Cori Bush's upset win in Missouri and Jamaal Bowman's victory in New York. "Ilhan Omar fights for her constituents with courage and a positive progressive vision."