Making Billions v Making Ends Meet: How the Pandemic Has Split the US Economy in Two

US billionaires’ wealth is soaring while millions remain unemployed, creating a country with two economies and increased inequality 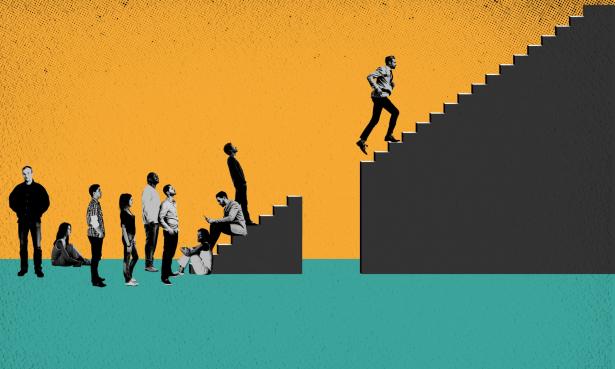 ‘Just because we fall in a certain pay bracket doesn’t mean our lives are less valuable than anybody else’s.’, Composite: Getty/Guardian Design

It’s only a hundred miles from Manhattan to East Hampton but as the city swelters the Long Island town can seem a world away. Cool Atlantic breezes take the heat off long summer days spent on its miles of white, soft sand beaches. High-priced farm stands provide heirloom tomatoes, peaches and arugula to summer visitors and the mansions of the financial titans and the celebrities, including Beyoncé and Jay-Z, Julianne Moore and Robert Downey Jr, who summer there.

Nor does the coronavirus pandemic seem to have dampened the 1%’s enthusiasm for the Hamptons.

If anything, quite the opposite. House prices are soaring. High-priced rentals have all been snapped up. It took developer Joe Farrell just one day to rent Sandcastle, his 15-bedroom mansion with sunken tennis courts, for $2m for the summer to “a textile tycoon and his family who were stuck in Manhattan and wanted to leave the city on a day’s notice. This was a Covid situation – not a normal summer rental”, he told the New York Post.

The Hamptons really is a world away for Sara Fearrington. It may as well be another planet. The 43-year-old lost her job at Waffle House in Durham, North Carolina, when the pandemic struck. Now she, her husband and their six children are trying to make ends meet on $125 in unemployment benefits each week. Fearrington is one of the 2.6 million people to have lost her job in the food services and drinking industry since February.

The Fearringtons had been receiving an extra $600 a week in benefits thanks to an emergency lifeline set up by Congress in March. That expired at the end of July and Washington is deadlocked over a replacement. “Now we literally have to sit here and wait, your head on a chopping block,” she said.

Stock markets are setting new highs driven by soaring prices for the tech companies that enable those lucky enough to work from home. Apple is close to being valued at $2tn. The total wealth of US billionaires has soared $685bn since the middle of March to a combined $3.65tn. Rock-bottom interest rates have triggered a home sales boom for some as those with the money reconsider their priorities in the work-from-home era. With nowhere to go, those Americans who can are saving at record rates.

But only one in four Americans can work from home. Meanwhile roughly 30 million people are unemployed in the US, about 20% of the workforce. Almost 30 million Americans recently reported that they have not had enough to eat at some point in the previous seven days, according to the Census Bureau. The vast majority – about 26 million – had lower rates of educational attainment.

The recession has also further exposed the racial wealth gap. The job market ticked up again last month but 14.6% of Black and 12.9% of Latinx adults were unemployed in July, versus 9.2% of whites.

“It’s white-collar professionals who are able to work from home. In some ways, this is a sign that the economy is just officially split in two,” Glenn Kelman, chief executive of property company Redfin, told NPR last week.

“We are all in this together” may be the rallying cry for the pandemic but the truth is the poor, and particularly people of color, have been devastated by coronavirus and its attendant recession while the wealthy have weathered it and in some cases made huge gains. Research into previous recent pandemics from economists at the International Monetary Fund suggests it’s a trend that may continue even after the outbreak abates.

Economists often talk of V-shaped economic recoveries, a sharp drop and an equally sharp bounce back. Sometimes the economy drags along the bottom before bouncing back – a U-shaped recovery. Now there is talk of a “K-shaped” recovery. A fall followed by a split where the well off and well educated tick up while the poor and poorly educated fall further behind.

For people able to work from home, “life has returned largely to normal”, said Peter Atwater, adjunct lecturer in the economics department at William & Mary. “In fact, the wealthiest today are even richer than they were before the outbreak.”

For those people, on the arm of the K, Atwater said it’s “almost as if the outbreak never happened. That’s starkly different for people on the leg. If you are a small business person, work in the service industry, had to go back out into a manufacturing facility, a job in the ‘real world’, as it were, that has weighed heavily. Sadly it has weighed particularly heavily on minority communities at a time when they are the largest populations experiencing the outbreak. It’s a stacked inequity.” 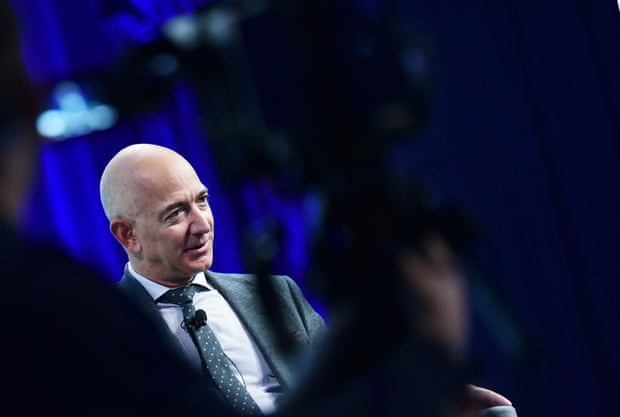 The total wealth of US billionaires, like Jeff Bezos, has soared $685bn since the middle of March to a combined $3.65tn. Photograph: Mandel Ngan/AFP/Getty Images

In Edgar Allan Poe’s The Masque of the Red Death Prince Prospero and the knights and dames of his court retire to “the deep seclusion of one of his crenellated abbeys” to escape the Red Death, a plague that is devastating the country around them.

Amply provisioned and, so they think, sealed off from the outside world, Prospero and his pod put on a masqued ball but the prince is angered to find that one of the guests has dressed as Red Death.

Prospero chases the guest from room to room, only to realize the figure is the Red Death personified. The guests sicken and die: “And Darkness and Decay and the Red Death held illimitable dominion over all.”

Inequality was a pre-existing condition for the US economy long before the coronavirus started its spread. For Fearrington the pandemic has merely exposed its “ugly face”. But she is certain that if this goes on much longer today’s Prosperos too will see that face.

A Fight for $15 activist campaigning for a rise in the national minimum wage, Fearrington is hopeful that as so many people come to realize how bad the situation has become, something will change. “What we have right now is economic failure,” she said.

“My husband is black. We are a mixed family that is living through this struggle. It is not a fun place to be. I have been with my husband for 28 years. Twenty-eight years and I am still seeing the same problems? No. We have got to speak up. I have had enough.” 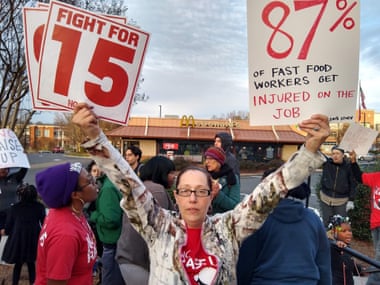 Sara Fearrington: ‘What we have right now is economic failure.’ Photograph: Courtesy of the Fearrington family

She has seen the reports of people snapping up second homes. “I have dreams of that too,” she said. “I am happy for people who have that. I want everybody to prosper. But at the same time I feel left behind. Some of my dreams are now halted.” She said “every little bit of savings” she had stowed away has gone “just to keep our heads above water”.

Even before Covid-19 life was hard for Fearrington. She worked 42-72 hours a week, taking all the shifts she could get. “Every holiday. Every one of my kids’ birthdays, I was working.” Paid $3.15 an hour before tips she could make $40-$70 a day. The family needed every dollar. Medical costs are a constant fear. Her husband has a rare lung disease, ABPA. His inhalers can cost $300. One stay in hospital left the family with a bill for $15,000. “If you get sick, too bad, so sad,” she said.

I feel left behind. Some of my dreams are now halted Sara Fearrington

“We need healthcare for all,” she said. “A lot of things have to change, we need to learn to live together. Just because we fall in a certain pay bracket doesn’t mean our lives are less valuable than anybody else’s.”

The rise of the Black Lives Matter movement, the Fight for $15, #MeToo and Occupy Wall Street are all recent examples of powerful, popular movements demanding real change. The continuing protests across America following the killing of George Floyd and the fact that more white people too are joining those protests gives her hope. “Now is a time when people are recognising that silence has not worked. We are coming together. Ugliness has to stop,” she said.

Without change there will be more outrage, said Atwater. “I don’t think the wealthy appreciate how vulnerable they are to those who are out in the real world. They are not immune to the world around them.”

The US economy is driven by the consumer. About 70% of economic growth is dependent on consumer spending. The longer this slowdown continues, the more likely that drain on growth will creep up the income ladder. The last recession started at the top with Lehman Brothers bankers walking away with boxes of their belongings as the financial crisis bit. It soon trickled down. This may have started in Waffle House but it doesn’t mean it won’t trickle up. 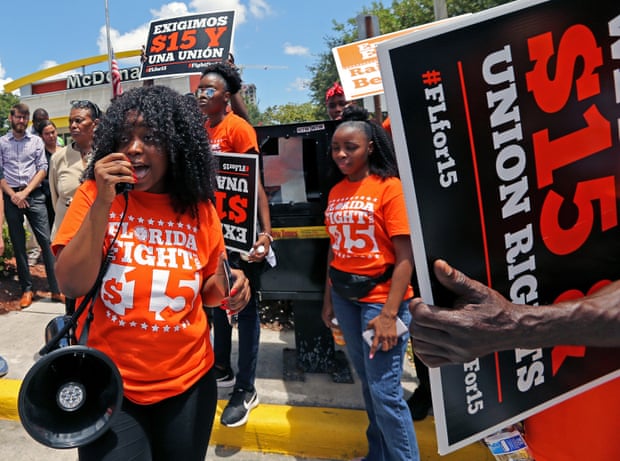 If the current situation continues, “there is a very real risk that companies will start looking at their balance sheets and thinking, ‘Actually, we really need to trim our workforce’, and that could happen across the board. That’s not just confined to leisure and hospitality,” said John Payne, economist at Oxford Economics.

Widening job losses and increasing inequality is likely to lead to louder calls for change.

“We talk about the American dream, the ability to pull yourself up by your bootstraps. Rags to riches. All this American mythology is being challenged by this extraordinary wealth divide,” said Atwater. “The rubber band has been pulled too far. People are uncomfortable with how divided we have become.

“At the same time I don’t think the wealthy appreciate how vulnerable they are to those who are out in the real world. They are not immune to the world around them.”

That realization can’t come soon enough for Fearrington: “It has to stop. We are still all humans at the end of the day,” she said.

Dominic Rushe is business editor for Guardian US. He was part of the Guardian team that won the 2014 Pulitzer prize for public service journalism.