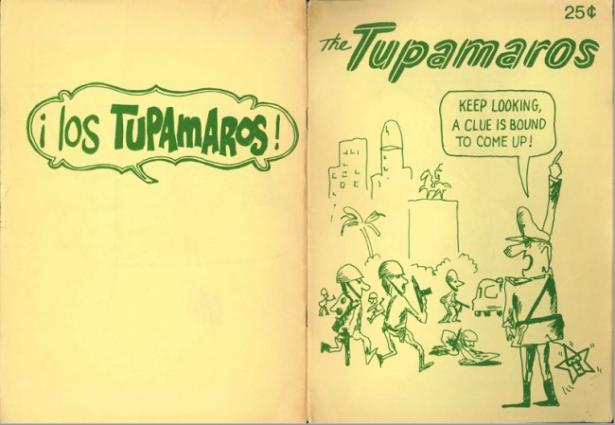 he cover of a NACLA translation of a comic written by the Mexican cartoonist Rius about the Tupamaros National Liberation Movement.,NACLA archives

Not long after 4:00 AM fifty years ago today, August 10, 1970, police discovered the corpse of a kidnapped fellow officer in a stolen Buick. He was shot multiple times, and his blood pooled beneath the parked car. His name was Dan A. Mitrione, formerly the police chief in Richmond, Indiana.

But Mitrione’s body turned up not on the streets of Indiana but in Montevideo, Uruguay. Sent there as “chief public safety advisor” in 1969 by the U.S. Agency for International Development, Mitrione believed he was working as a police reformer, instilling professionalism and technical expertise. His kidnappers, the Movimiento de Liberación Nacional–Tupamaros (Tupamaros National Liberation Movement), a radical, left-wing underground organization, claimed his reforms improved the ability of Uruguayan police to dominate the working class and repress revolutionary activity. Both were right.

Mitrione’s story shows that police reforms can actually exacerbate the problems they purport to solve.

Five decades after Mitrione’s killing, the meaning of police reform is now a topic of debate in the streets of the United States, even as police respond to ongoing political protests with overwhelming shows of force. Mitrione’s story shows that police reforms can actually exacerbate the problems they purport to solve.

But in the charged political context of the Cold War, strengthening police power in this way meant ensnaring greater numbers of people in a web of ideological suspicion.

The Office of Public Safety deepened Uruguay’s turn toward authoritarianism by endowing the police with new capabilities of mass surveillance and armed confrontation. Mitrione’s predecessor in Uruguay reflected that there “was some truth to the allegation” that his advisory work in the mid-1960s resulted in “police brutality and repression under the ‘control’ of U.S. Government agents.” This brutality in turn pushed activists to militancy, ultimately paving the way for Mitrione’s kidnapping.

Although Uruguay was a peaceful and relatively prosperous country at the beginning of the 1960s, economic stagnation spurred labor strikes and student demonstrations. Fearful of public protest getting out of hand, the police clamped down. With U.S. help, officers adopted the frequent use of tear gas to disperse crowds. This was a “humanitarian” reform in a country whose police had previously tended to confront demonstrators with sabers.

Deprived of a right to speak out, including by clouds of U.S.-supplied tear gas, leftists went underground.

Escalating repression of public demonstrations and interference with strikes propelled more young radicals, including the Tupamaros, toward subversive tactics. The government began censoring the press. Deprived of a right to speak out, including by clouds of U.S.-supplied tear gas, leftists went underground.

When Mitrione arrived in Montevideo, the Office of Public Safety had already facilitated arrests of hundreds of political dissidents. By kidnapping Mitrione on July 31, 1970, the Tupamaros hoped to prompt the release of 150 prisoners in exchange, but Uruguayan President Jorge Pacheco Areco refused to negotiate. U.S. Secretary of State William Rogers, for his part, suggested that Uruguay threaten to kill imprisoned Tupamaros, while paramilitary death squads menaced their families.

In this context, allegations of police torture swept Montevideo, and many believed Mitrione was killed in retaliation for facilitating torture. After Mitrione’s death, the 1972 French film State of Siege, which dramatized the story of his kidnapping, amplified accusations that he taught torture on behalf of the CIA. Such accusations from activists in the United States ultimately pushed Congress to close the Office of Public Safety. The work of the North American Congress on Latin America was indispensable to this effort.

The police assistance program became a topic of broad public concern in the United States for the first time in the summer of 1970. NACLA, however, had initially mentioned the Office of Public Safety in 1968, and published its first in-depth examination in January 1970, half a year before Mitrione’s kidnapping.

Already keenly focused on the U.S. military-industrial complex and U.S. interventions in Latin America, the violent death of a public safety advisor further inspired NACLA members like Michael Klare and Nancy Stein to expose the operations of the Office of Public Safety in the hemisphere. Using obscure but publicly available records, interviews, and sharp investigative skills, Naclistas explained why public safety advisors were detailed to Latin America and tabulated the size of the program in each country. They revealed how Congress funded police assistance, and how the Central Intelligence Agency supported it.

The U.S. is fast becoming the world’s policeman in the most precise sense of the word.

The evidence that Mitrione taught torture is inconclusive to this day. By expediting the delivery of tear gas and constructing a nationwide police telecommunications network, however, U.S. advisors certainly helped build the foundations of repression beneath the veneer of ordinary modern police reform. This was already the conclusion of NACLA in 1971, observing, “The U.S. is fast becoming the world’s policeman in the most precise sense of the word.”

In Uruguay, the political repression begun in the 1960s was lasting. The country became one of the most authoritarian military dictatorships of the 1970s, thought to hold more political prisoners per capita than any of its neighbors. Protest became impossible, while the shadowy Far Right was emboldened. This frightening history is a warning for the United States today.

Like the Pacheco regime in Uruguay, the Trump administration intensified its confrontation with demonstrators in recent weeks. Federal law-enforcement agents have aggressively targeted, in the president’s terms, “anarchists,” “antifa,” and “the radical Left,” placing whole cities under ideological suspicion. Acting Secretary of Homeland Security Chad Wolf boasted of “proactive” arrests, a mockery of the Constitution.

This sequence of increasingly belligerent police action against demonstrators, combined with their vilification from the top, emulates Uruguay’s turn toward authoritarianism. Many in the United States fear that the administration is provoking protesters to justify further clampdowns.

The movement for police reform is at a crossroads. The heavily armed officers in Portland signal one path forward. Call it the old Uruguayan route. Another is the attempt to regain legitimacy through technical and administrative reforms. That is the likely Joe Biden route. But the experience of the Office of Public Safety shows how closely related these two can be.

The demands of activists today—like those that originated with NACLA fifty years ago concerning the Office of Public Safety—to defund the police and invest in alternatives, are the only ones that chart a new pathway toward justice and equality.

Stuart Schrader (@stschrader1) is the author of Badges Without Borders: How Global Counterinsurgency Transformed American Policing, published by University of California Press in 2019. He is Associate Director of the Program in Racism, Immigration, and Citizenship at Johns Hopkins University, where he is also a Lecturer.