film Bacurau Is the Most Must-See Movie Since Parasite

Movies about class and inequality have made it into the global mainstream recently and are picking up major prizes. The genre-busting, edge-of-your-seat Brazilian film Bacurau is the latest. You've gotta see it. 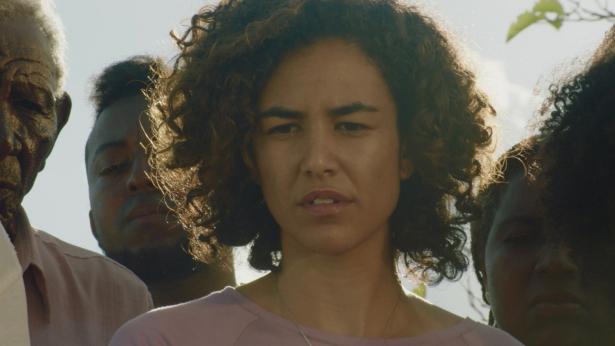 It’s a rare event when you can run to all your socialist friends and urge them to watch a movie that’s a thrilling crowd-pleaser. We must face the fact that, usually, leftists are recommending solemn and informative documentaries to each other, or grim biographies of people who stand out in history because they once had a social conscience and did something about it — and probably paid a high price. And of course, there are always dark indie dramas about oppression, plus Ken Loach films. Our feel-bad movies are generally stuck on the fringes of international media.

You might’ve heard the hype for this Brazilian genre-busting wow of a film already. It’s a top earner for independent distributor Kino Lorber’s video on demand streaming arm, Kino Marquee. Though if you haven’t heard anything about it, that’s even better. It helps to go into Bacurau knowing as little as possible, so that the delights of confounded expectations can work to their fullest extent.

I’d like to respect the “no spoilers” rule as much as I can in describing the film, though in this case any description risks a spoiler because there are so many artful narrative shifts early on. I will merely give this away — Bacurau ends in a spectacular bloodbath of necessary violence, and you’ll love every drop spilled.

Bacurau is the name of both the film and the fictional, impoverished, backcountry village in northeast Brazil where it takes place. If you know your film history, you might be reminded of Cinema Novo, watching those first dusty, realistic scenes of village life featuring a vivid cast of memorable characters played by an ensemble of professional and local non-professional actors.

Cinema Novo was a 1960s Brazilian movement which took on as part of its project the examination of race and class oppression, often in remote regional subcultures of the vast country, and frequently including fantastical elements drawn from the folkloric histories of those regions. In later phases of the movement, which included attempts to make Cinema Novo more widely popular, it embraced so-called “Tropicalism” in the form of gaudy colors, bad taste, and the bloody theme of cannibalizing foreign enemies, drawing on B-movie genre conventions and pornochanchadas (late 1960s–70s sex comedies).

But whereas the politically revolutionary Cinema Novo movement rejected and subverted Hollywood and Hollywood-influenced genre filmmaking conventions, which had long been dominant in Brazil, Bacurau recovers and celebrates them in a bid for international popularity. With the freaky inclusion of Western, sci-fi, horror, and action film conventions, we hardly know where to look to find the sources of the various possible threats to the village.

Is the main threat the death of the elderly village matriarch at the beginning of the movie, indicating a tremendous loss of community power that bodes ill? Was the matriarch’s power based in strong leadership or folkloric magic or regional crime represented by the presence of local gangster Pacote (Thomas Aquino), now calling himself Acacio in an attempt at reform? Why does the formidable village doctor Domingas (played by legendary Brazilian star Sônia Braga) denounce the matriarch at her funeral?

Furthermore, what about the truckload of coffins spilled out into the road after a vehicular smash-up that Teresa (Bárbara Colen), returning from the city for the matriarch’s funeral, passes on her way home, in an ominous nod to the deadly coffin-and body-producing town in Sergio Leone’s landmark spaghetti Western A Fistful of Dollars?

Who shot up the water delivery truck on its way into town, at a crisis point when the village has been cut off from its main water supply, possibly by the porcine major Tony Jr. (Thardelly Lima), who may be embedded in Chinatown levels of local or even more far-reaching corruption? What’re those pills that community members keep taking? And was that a real flying saucer spied by a local farmer riding his motorcycle into town?

Above all, why is the village suddenly disappearing from satellite maps, and how does that relate to the Brazilian, American, European, and Australian tourists spotted in the area? The lurking presence of a menacing German played by Udo Kier can’t be good.

Bacurau writer-director Kleber Mendonça Filho, working for the first time with co-director Juliano Dornelles, has achieved a rich sense of place, something he’s pursued in all three of his films, whether it’s a neighborhood (Neighboring Sounds, 2012), an apartment building in a coastal community (Aquarius, 2016), or a village as in Bacurau.

In this film he focuses on a place that’s under threat from a combination of the forces that also contributed to its creation — geography crossed by colonialism, economic exploitation, political corruption, and racial divisions. Mendonça shot his first two films in his hometown of Recife, and Bacurau in his home region of Northeastern Brazil.

The location is significant to both directors, because its people are the rural and small-town proletarian figures who make a living hiring themselves out to the urban upper class. As Dornelles put it, “The north-east is where maids in São Paulo come from, and where Kleber and I are from. We wanted an adventure where we are the heroes.”

The harsh political critique manifest in the film has led to the belief that Mendonça and Dornelles designed it as a direct attack on right-wing president Jair Bolsonaro, but Bacurau was written and shot before Bolsonaro came to power. Mendonça and Dornelles are both outspoken leftists — as is actor Sônia Braga who starred in Mendonça’s Aquarius as well as Bacurau — and they were avid in their support of Bolsonaro’s predecessor, Dilma Rousseff who was removed from office in 2016 in what Mendonça terms a “soft coup,” and before her, of President Luiz Inácio Lula da Silva. At the Cannes premiere of Aquarius, they staged a red carpet protest, with signs reading “Stop the coup in Brazil,” and, “Brazil is not a democracy anymore.”

It should be noted that the Bolsonaro administration’s hostility to the Brazilian film industry in general has taken destructive forms that, according to Mendonça, sink to the level of “sabotage.”

Last July, the president accused national film agency ANCINE — typically the source of initial investment in Brazilian films — of making “pornography,” threatening it with privatization unless it applied a “content filter.” Yet behind the bombast has been a quieter policy of slashed budgets…, particular hostility to LGBT projects — four TV dramas had funding specifically withdrawn — and stifling bureaucracy. Under a four-strong board in which three seats are vacant, film finance has almost entirely stalled. Up to 4,000 films at various stages of development are estimated to be in limbo.

And Mendonça is under direct attack as well. In May, after his triumph at the Cannes Film Festival — Bacarau won the important Jury Prize — the Brazilian government demanded that Mendonça return the roughly $500,000 it provided for his debut film Neighborhood Sounds, claiming he had gone far over budget.

The Brazilian film industry is now in crisis, and even Rio de Janeiro’s International Film Festival has lost its government support. The future of the industry is now in question. “Films about to be shot have been cancelled,” says Mendonça. “This has been done with glee.”

It seems more than likely that Mendonça will soon be seeking financial support from the international film community. This seems fitting, given his global perspective cinematically. In a recent interview, for example, Mendonça discussed the kinship between Bacurau and Korean director Bong Joon Ho’s Parasite.

This is not just because of their films’ unsparing representations of the class war, which eclipses national boundaries —as Bong expresses it, “We all live in the same country…capitalism.” Instead, Mendonça refers to their shared cinematic influences. The two directors came of age at the same time and saw the same great genre films of the 1970s and early 80s, made by such auteurs as John Carpenter, George Miller, David Cronenberg, and Steven Spielberg (before he ruined himself).

As Mendonça put it, “When I saw Parasite, it was like Bong was talking the same language as me. In fact, I feel like Bacurau and Parasite are cousins.” If that doesn’t get you to watch Bacarau, nothing else I can say will do it.

OUR NEW ISSUE OF JACOBIN – LOOKING AT WHAT THE BERNIE CAMPAIGNS ACCOMPLISHED AND THE WORK LEFT TO DO – IS OUT THIS WEEK. GET A DISCOUNTED PRINT SUBSCRIPTION TODAY!