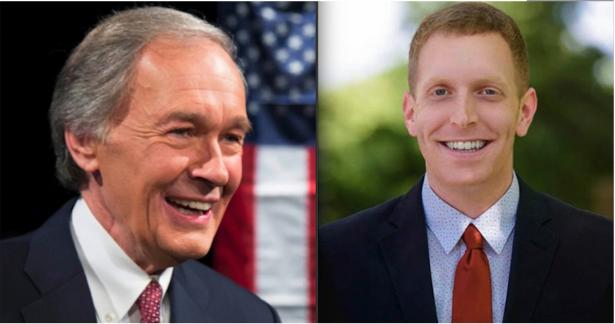 Progressives running in two high-profile Democratic primary elections in Massachusetts reported Friday that they outraised their centrist opponents in a recent fundraising push, raising hopes for the outcome of the September 1 primary in the state.

Kennedy, who Markey has denounced as a "progressive in name only," raised over $100,000 while Markey's campaign raised more than $300,000 via 9,000 individual contributions.

Markey, who co-authored the Green New Deal with Rep. Alexandria Ocasio-Cortez (D-N.Y.), has rejected Kennedy's attempt to cast himself as a youthful candidate who will bring bold reforms to Massachusetts voters' lives. The senator condemned Kennedy in a recent debate for spending time working for a right-wing prosecutor, neglecting to prioritize action, and failing to back Medicare for All until 2019.

"In less than 24 hours, Ed raised $300,000 after Nancy Pelosi endorsed our opponent," tweeted Sam Delgado, a fellow with Markey's campaign. "The progressive movement is real, it's alive, and it's sticking with Ed."

The vast majority of Morse's funds in recent weeks came in the form of small donations under $200, while just 1% of Neal's contributions were under $200.

The news out of Morse's campaign follows a controversy over the mayor's consensual relationships, which the Massachusetts Democratic Party reportedly helped a College Democrats chapter to orchestrate.

Medicare for All advocate and infectious disease physician Robbie Goldstein, who is running to unseat Rep. Stephen Lynch, also outraised his opponent. Goldstein amassed $174,000 through 1,646 donations in the final FEC filing period while Lynch raised less than 10,000.