tv About That ‘Controversial’ Black-ish Episode …

This episode of Black-ish, which, if it had come out when it was supposed to, would have been a time capsule of where we were as a nation a year into Trump’s presidency. 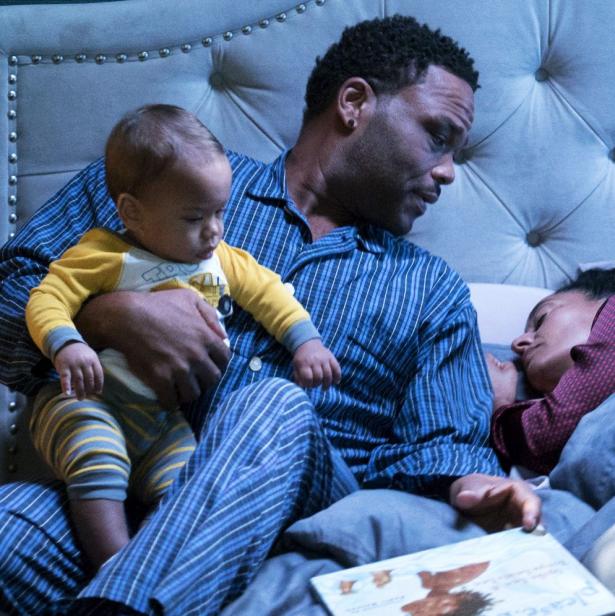 “Please, Baby, Please” recounts President Trump’s rise to power as a leader who, as Dre (Anthony Anderson) puts it to his baby son, “scared the s— out of Daddy.” , Photo: ABC

The Black-ish episode “Please, Baby, Please,” an airing of Trump era grievances framed around Dre’s attempt to calm his infant son, was supposed to air in February of 2018. That never happened due to what was characterized at the time as “creative differences” between ABC and Black-ish creator Kenya Barris, who co-wrote the season-four episode with Peter Saji. A few months after the dustup, Barris signed a multimillion-dollar contract to develop future new series for Netflix.

Yesterday, more than two years after all that ruckus, “Please, Baby, Please” finally became available on Hulu, as confirmed by a social media announcement from Barris. “We were one year post-election and coming to the end of a year that left us, like many Americans, grappling with the state of our country and anxious about its future,” Barris wrote in the post. “Those feelings poured onto the page, becoming 22 minutes of television that I was, and still am, incredibly proud of.”

“Please, Baby, Please” — which now appears on Hulu at the very end of the lineup of season-four episodes — really does play like a creative endeavor that emerged from a flood of strong feelings. While it’s more scattershot and heavy-handed than Black-ish’s other notable post-2016 political episodes, “Hope” and “Juneteenth,” some of it resonates even more deeply than Barris could have anticipated in early 2018. What’s most clear is that it seems even more ridiculous now that ABC didn’t air it back then.

Set during a thunderstorm, when baby DeVante is wide awake and Dre (Anthony Anderson) is tasked with trying to soothe his youngest son back to sleep, the episode unfolds as a series of issue-focused, cross-generational conversations between various members of the Johnson family who also are having trouble sleeping. First, after reading some of Spike and Tonya Lewis Lee’s children’s book Please, Baby, Please, narrated via a guest voice-over by Spike Lee, Dre tells DeVante his own story about “the Shady King,” an American ruler who split his kingdom in two. Then Dre and his father, Pops (Laurence Fishburne), discuss the evolution of American white supremacy and Black pride. Junior (Marcus Scribner), concerned about weighing in on a school debate about whether kids can kneel during the national anthem, talks to Dre about Colin Kaepernick and the importance of peaceful protest. And lastly, twins Jack (Miles Brown) and Diane (Marsai Martin) confess to their dad that they’re scared by the storm, but not because they fear thunder; the extreme weather reminds them how concerned they are about climate change. The structure of the episode, in which Dre gains perspective from his elders and from younger generations, is set up to lead to an (overly) optimistic conclusion.

Reports back in 2018 cited the dialogue about Kaepernick as a primary reason why ABC pulled the episode, perhaps understandable given the extra-charged conversation surrounding Kaepernick at the time. The Black-ish episode was due to air on the heels of an NFL season in which President Trump indirectly referred to Kaepernick as a “son of a bitch” for having kneeled during the national anthem to protest racial injustice and police brutality, remarks that prompted even more players to take a knee. During that 2017–2018 season, Vice-President Mike Pence also made a show of walking out of a 49ers game when players kneeled during the anthem.

ABC Entertainment Group president Channing Dungey later told reporters that the network’s issues weren’t focused on the conversation that Dre and Junior have about Kaepernick, and having seen the episode, that makes sense. There is nothing problematic in that dialogue. Dre expresses a pro-kneeling stance, while Junior says he’s not sure he agrees with refusing to stand during the anthem but ultimately supports the rights of players, as well as the students at his school, to protest in that way. If anything, the segment of the episode related to Kaepernick goes too far to show both sides of the issue, a fact that comes through louder and clearer in 2020, when, following the public outrage over George Floyd’s death, professional athletes in other sports are kneeling and playing with Black Lives Matter messages splashed across their fields, courts, and jerseys. Despite all the backward steps this country seems to have taken in the past two years, watching this episode serves as a reminder that we’ve also taken some steps forward, at least symbolically, since then.

I suspect the story of the Shady King, a.k.a. Trump, caused more consternation for ABC executives at the time, who were then excited about their semi-Trump-focused reboot of Roseanne. (In case you’ve forgotten, that turned out not so great.) The tale, brought to life with a mix of animation and actual news clips, recounts Trump’s rise to power as a leader who, as Dre puts it, “scared the s— out of Daddy.” Footage of Trump, parroting the words of Bane in The Dark Knight Rises, is featured. So is cartoon imagery of hunched-over workers being forced to build a wall and toilet paper being tossed out of a castle as Dre describes the Shady King as someone who “appears to be out of touch” with what his subjects need.

In his attempt to explain how we wound up with a Shady King, Dre flashes back to 2008, when a figure he calls Prince Barry was elected, which “was a pretty big deal for this kingdom because this was the same kingdom that used to use people who look like Prince Barry as, how do I put this? Really cheap gardeners.” Images of Barack Obama appear on the screen during this segment, followed by pictures of Black slaves.

Barris and Saji, via Dre, posit that things changed during Obama’s presidency, but too much for the comfort of some Americans. “I mean, do we really need remote-control fighter jets, or to give the medal of freedom to a dancing daytime talk-show host?,” Dre asks, as an image of Ellen DeGeneres receiving said medal from Obama flashes on the screen. “Probably not.” In 2018, when broadcast networks were still leery of offending conservative viewers and DeGeneres’s reputation as the nicest gay icon was still fully intact, this all probably made some ABC executives break out in severe hives.

But nothing about this story was wrong then, and its accuracy is even more apparent now. That makes this episode of Black-ish, which, if it had come out when it was supposed to, would have been a time capsule of where we were as a nation a year into Trump’s presidency, more like a pair of bookends that speaks to then and also now.

There are moments in “Please, Baby, Please” that, obviously inadvertently, strike sharp chords in the summer of 2020. The shade thrown at Ellen, which might have been perceived as homophobic back then, seems more justifiable given the recent reports about the toxic culture on DeGeneres’s show, which, apparently, plenty of people in Hollywood already knew about. Dre has to put his Shady King story on pause when his wife, Bow (Tracee Ellis Ross), tells him that little DeVante is too young to know how scary the world has become. “It’s like the only place you can find a little peace is at home,” she says. This is in no way meant to be a laugh line, but in the midst of a pandemic that seems destined to keep us largely in our homes well into 2021, it now plays as a brutal bit of dark comedy. While the Shady King story unfolds, the Run DMC song, “Hard Times,” plays on the soundtrack. It was a natural choice two years ago, but listening to the lyrics now — “Hard times spreading just like the flu / Watch out homeboy, don’t let it catch you” — makes one wonder if Barris is legitimately psychic.

Then there’s the ending, which hits in all kinds of different ways now. As Dre crawls into bed alongside his wife and his kids — well, minus Zoey, who, like all children, has grown up and gotten her own spinoff — he finds comfort in the tradition of American resilience. “That’s the thing with our country,” he says, via voice-over. “We’ve gone through a lot but when it’s darkest, we help each other out. No matter how bad the storm is, we’ll be here for each other.” Hearing this in the middle of a congressional debate over coronavirus relief, a battle over whether to open schools, and continued irresponsible stubbornness by those who still refuse to wear masks, that conclusion sounds laughably naïve. It was naïve, we know now.

But that’s also the heartbreak of watching “Please, Baby, Please.” It captures a sense of anxiety that was profound and an America that looked like a disaster to many in 2018. But it’s also a snapshot of a comparatively “better” time when we could not imagine how much worse things would get. That makes the conclusion of this episode, which expresses the sort of optimism that we tend to expect from family-oriented, broadcast-network sitcoms, register as the sounding of an alarm. If, in 2020, we look back at a politically panicked half-hour of television as a mark of lost innocence, imagine how 2020 could seem in 2022.