Uphold Palestinian Struggle In All Its Forms

Association with the Palestinian armed resistance and its political parties is not a cause for shame or a justification for repression. The legitimacy of armed struggle to liberate a people from colonial and foreign domination is legally recognized. 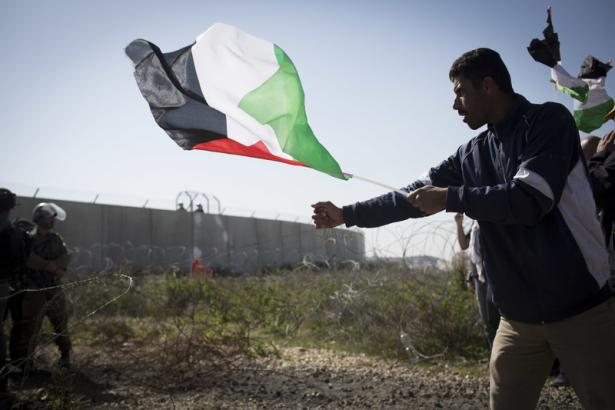 Israel and its allies have never accepted any form of Palestinian resistance. , Oren Ziv/ActiveStills

Fifty years ago, Palestinian intellectual Ghassan Kanafani put forward a clear position about the boycott of Israel. Kanafani was, at the time, not only an esteemed novelist and short story writer. He was also one of the leading spokespeople of the Palestinian armed revolution, representing the Popular Front for the Liberation of Palestine.

“Our boycott of Israel is not based on an emotional position, but rather, it comes from the nature of our confrontation against this enemy. Boycott is in itself a statement,” Kanafani wrote.

His remarks came in response to a debate between Israeli and Palestinian students hosted in Cyprus by the BBC. “Sitting with the enemy – even in a TV studio – is a major mistake in the battle, and we should not consider it a minor issue,” Kanafani said. “We are in a state of war, and at least for Palestinians, it is a matter of life and death.”

Kanafani’s words were featured in Palestinian Affairs Magazine in August 1972 following his assassination by the Mossad, Israel’s foreign intelligence agency. His own life reflected a complementary approach to Palestinian resistance: armed struggle, cultural work, international solidarity and boycott activity flowing together toward the goals of justice, liberation and return.

This unitary vision of Palestinian resistance has come under sustained and vicious attack by Israeli propaganda organs such as its Ministry of Strategic Affairs. Until earlier this year, this ministry had been led by Gilad Erdan, the right-wing Likud politician also credited with detaining the bodies of slain Palestinians and cutting the water rations of Palestinian prisoners in his sideline role as minister of internal security.

Erdan is now slated to serve as the latest war criminal representing Israel as its ambassador to both the United States and the United Nations.

The claims made by these propagandists are often baseless, poorly researched and ludicrously conspiratorial.

The strategic affairs ministry has escalated its attacks on Palestinian human rights groups cooperating with the International Criminal Court, suggesting that they are front groups for banned political parties like the Popular Front for the Liberation of Palestine.

Israel’s allies in Europe, the United States and elsewhere, themselves with their own long histories of racist colonialism, settler-colonialism and present-day imperialism, have responded positively to these propaganda campaigns.

Palestinian resistance in any form at all – even the simple expression of the right to boycott and refuse trade and interaction with and exploitation by a colonial power – is smeared as unacceptable, bigoted and potentially criminal.

For example, the European Union has imposed new conditions on funding provided to Palestinian nongovernmental organizations. These conditions require groups to affirm that individuals, employees and partners involved in their projects are not associated with any of the major Palestinian political organizations designated as “terrorist groups” by the EU – all while the EU rewards Israel for its crimes.

These attempts come hand in hand with efforts to criminalize the boycott of Israel.

Examples include the German parliament’s anti-BDS resolution as well as the additional funding restrictions in Denmark, the Netherlands and elsewhere that specifically bar grants to Palestinian organizations advocating for boycott, divestment and sanctions.

Crucially, it also seeks to isolate both the international boycott movement and the Palestinian armed resistance from broader international support and from one another, attempting to drive a political wedge of disavowal between the two in order to strike a combined blow against both.

From the collaborationist “Village Leagues” to the Palestinian Authority’s “security coordination” under the Oslo accords, Israel and its imperialist partners have repeatedly sought to force Palestinian organizations and movements to remake themselves in the image of the colonizer.

In this case, they demand that the boycott movement, civil society groups and solidarity campaigns discard, reject and disclaim all ties to the very movements and fighters that have kept the Palestinian people and their cause alive.

In order to effectively undermine this attack, it is necessary to not only debunk false claims but to reject their very foundation. Association with the Palestinian armed resistance and its political parties is not a cause for shame or a justification for repression.

One example of this is found in the Palestinian campaign to reject conditional funding; organizations have refused grants of millions of dollars in order to remain clear on these principles.

Another example is found in Lebanon. Samah Idriss, founding member of the Campaign to Boycott Supporters of Israel in Lebanon, notes: “Popular boycott is part and parcel of ‘total resistance,’ that also includes armed resistance. Both forms of resistance, civil and armed, are complementary and should not be viewed as mutually exclusive.”

The potential momentary relief found by distancing from or disavowing the armed resistance is fleeting at best.

More significantly, it plays directly into the campaign to delegitimize, criminalize and isolate those on the front lines of the Palestinian struggle. Israel and its allies have never accepted any form of Palestinian resistance, and boycott campaigns and popular organizing are not alternatives to armed resistance but interdependent tactics of struggle.

Any meaningful defense of the Palestinian people must clearly uphold the right to resist colonialism by all means, including armed struggle – and support efforts to remove Palestinian resistance groups from lists of “terrorist organizations.” Political and media campaigns for the Palestinian cause must work consciously to uphold the legitimacy of and normalize the armed resistance.

The legitimacy of armed struggle to liberate a people from colonial and foreign domination is moreover well recognized in international law. Indeed, the same European states that now seek to criminalize and delegitimize Palestinian resistance celebrate as heroes their own World War II resistance fighters. The European Union also officially celebrates Nelson Mandela, an unapologetic practitioner of armed struggle.

Sweden’s present-day constitution even explicitly obligates public officials to “act in the manner that best serves the defense effort and resistance activities” in the event that the country is occupied. What then is the basis for denying this right only to those occupied and colonized by Israel, other than the racist approval of such oppression?

Kanafani’s clear vision and exemplary life provide us with a meaningful approach to confront repression and defend Palestine. The popular struggle, the armed resistance, the Arab and international boycott movement and the global mass movements and fights for liberation flow, like streams of water, through different lands and along different routes, to come together in the rushing current of a Palestinian revolutionary future.

Khaled Barakat is a Palestinian writer and activist. He was subjected to a political ban and excluded from Germany for his political activity and expression on Palestine.