books Can We Unlearn Imperialism? 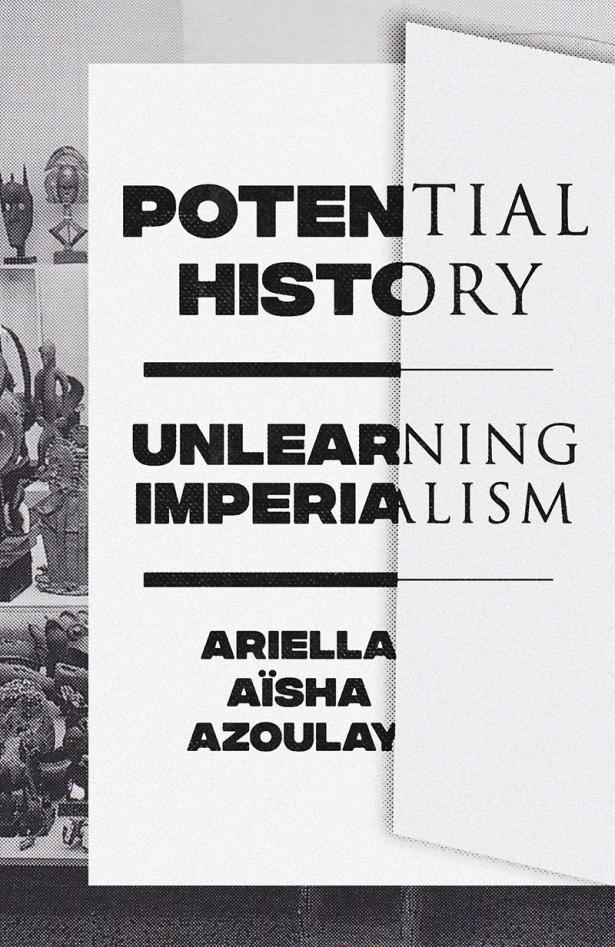 Does the history of photography, in actuality, start in 1492?  In her latest tour de force, Potential History: Unlearning Imperialism, Ariella Aïsha Azoulay reframes the history of photography, the archive, and the museum by proposing that the camera’s “shutter” is a “synecdoche” for imperialism as a whole.  Plunder, objectification, and, most elementally, systemic, and bodily violence are organizing features of photography, archives, museums, and the discipline of history itself — all of which serve as imperial technologies of extraction, conquest, control, and dehumanization.

1492 stands adjacent to the 1948 expulsion of 700,000 Palestinians from Palestine and the demolition and erasure of more than 400 of their villages, as well as to the French conquest of Algeria in 1830, which marked the beginning of 150 years of bloody, settler-colonial rule. Azoulay’s stacking of myriad 1492s reveals that photography is more than a craft or practice; rather it is a relationship that upholds empire, enforcing and reproducing the epistemology of racial capitalism and cis-heteropatriarchy.

Photography’s collaboration with the historian’s “craft,” the museum’s value, and the imperial archive serves to regulate the ways in which stories of multiple (and ongoing) 1492s are told, how lives are (under)valued, voices are suppressed, and resistance is quashed. Azoulay’s book stays close to the materiality of objects and images, providing us with readings that show both their liberatory and violent possibilities. She holds close the surface of material objects — whether “art” or anthropological artifacts — emphasizing the experiences they embody as “plundered” objects, purloined by philanthropists, conquerors, states, artists, and academics. These physical, discursive, and  commercial processes convert misappropriated objects to ones of knowledge,  “elevating” aestheticized objects that conceal the murder of their social (and physical) origins.

Despite its ability to pose alternate forms of “cocitizenship” (by opposing a sense of citizenship based on exclusion and violence), photography is an accomplice in systems of extraction and exploitation. In these days of toppling monuments — objects which have functioned as reminders to Black and Indigenous people of “their place” in a white supremacist, settler colonial society — Potential History offers us methods as much as lessons.

Azoulay provides examples of how photography (as object, art, document, or anthropological artifact) deprives subjects of their rights and being. A relevant current example is Tamara Lanier’s legal case against Harvard University, regarding the images of her great-great-great grandfather Renty (and Delia, his daughter). An enslaved African, kidnapped from the Congo, Renty was sold and forced into slave-labor on the South Carolina plantation of B.F. Taylor. The photographs were commissioned in 1850 by the Swiss-American Harvard Professor, Jean Louis Rodolphe Agassiz. In the course of pandering to monied-Southern audiences, Agassiz hired J.T. Zealy, a white South Carolinian photographer with deep connections to enslavers, to make a series of daguerreotypes of six black enslaved people, including Renty and Delia, to mark the physiological and phrenological particularities between the races.

For Azoulay, Renty’s and Delia’s portraits form a condensation point between legal, historical, institutional, and discursive forces.  Lanier’s lawsuit against Harvard and the University’s Peabody Museum, the images and the stolen lives they represent, and the history behind the production and maintenance of these photographs present concrete instantiations of the main targets of the book’s critique: photography, history, museums, archives, and educational institutions.  Azoulay seeks “companions,” such as Renty, with whom to walk and unlearn imperial legacies in hopes of retrieving  “other modalities of sharing the world.”

Much of Potential History’s 500 pages bear particular relevance to this moment of racial reckoning and faltering of neoliberal capitalism. As mass movements mobilize in the streets against anti-Black police brutality,  white supremacy, and systemic, structural racism, her call for  reconceptualizing  “the strike” to include historians, artists, photographers, museum workers, and “the governed” seems poignant. The issue of reparations (and “return”)  likewise remains a central part of unlearning history because compensation and racial justice reach beyond the necessity of recompensing those who directly experience the legacies of the enslavement of Black people and the theft of land from Indigenous peoples, including Palestinians. For Azoulay, reparations represent the intent to recover  a “worldly human condition, worldly sovereignty” and “a rejection of the imperial principle” that today dictates the normalcy of settler colonial regimes and racial capitalism globally.

What is compelling about Azoulay’s book is not newness, a concept she critiques as an effect of the temporality of imperialism. For those of us contemplating methodologies by which to decolonize photography, Potential History presents “nonimperial approaches” in order to unlearn how we look, receive, experience, and deploy images. One outstanding example is her reading of photographs of Allied soldiers “fraternizing” with German women in post-WWII destroyed Berlin. These images act as a placeholder for the “untaken photographs of rape” in the “as-yet-unacknowledged” archive of the shutter — a technology of the imperial scopic regime, which operates via sexual violence. This violence saturates the very ontology of Europe’s “progress,” resonating from Palestine to the Congo to Black America. Azoulay’s theorizing of the untaken photograph permits us to see before the hegemony of the shutter in order to recognize what formerly colonized peoples already know: “liberation” is predicated on the precarity and vulnerability of others.

Azoulay’s self-location as a Israeli Jew (who no longer identifies with the settler colonial citizenship of her birth) occupies the background of this book, which “is deliberately written from the position of a citizen, necessarily also a citizen-perpetrator.”  One might certainly ask whether unlearning is enough. Or, is the will to unlearn a privilege itself of racialized, imperial logos?

In rereading Potential History in the wake of the murder of George Floyd, Breonna Taylor, Tony McDade, and countless others in the United States, and of Iyad Hallaq and Ahmed Erakat (and countless others) in occupied Palestine, I wondered how quickly the overwhelming reality of constant violence against Black, Palestinian, and Indigenous folks will be reified into art objects and photographs in magazines. How quickly will these images of unwilling martyrs become icons inviting us to “reform” rather than abolish police, prisons, and the legal system (the most incorrigibly racist institutions in the United States)?

Stephen Sheehi is an Anarchist professor, anti-racist and anti-imperialist Arab activist, and founder of the Decolonizing Humanities Project at William & Mary.