Your Coronavirus Test Is Positive. Maybe It Shouldn’t Be.

The usual diagnostic tests may simply be too sensitive and too slow to contain the spread of the virus. 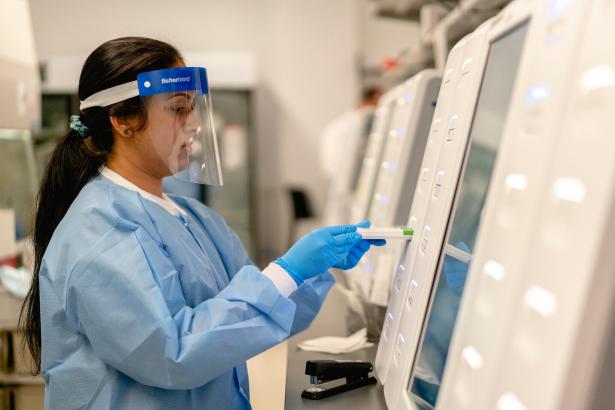 Tests authorized by the F.D.A. provide only a yes-no answer to infection, and will identify as positive patients with low amounts of virus in their bodies.,.Johnny Milano for The New York Times

Some of the nation’s leading public health experts are raising a new concern in the endless debate over coronavirus testing in the United States: The standard tests are diagnosing huge numbers of people who may be carrying relatively insignificant amounts of the virus.

Most of these people are not likely to be contagious, and identifying them may contribute to bottlenecks that prevent those who are contagious from being found in time. But researchers say the solution is not to test less, or to skip testing people without symptoms, as recently suggested by the Centers for Disease Control and Prevention.

Instead, new data underscore the need for more widespread use of rapid tests, even if they are less sensitive.

“The decision not to test asymptomatic people is just really backward,” said Dr. Michael Mina, an epidemiologist at the Harvard T.H. Chan School of Public Health, referring to the C.D.C. recommendation.

“In fact, we should be ramping up testing of all different people,” he said, “but we have to do it through whole different mechanisms.”

In what may be a step in this direction, the Trump administration announced on Thursday that it would purchase 150 million rapid tests.

The most widely used diagnostic test for the new coronavirus, called a PCR test, provides a simple yes-no answer to the question of whether a patient is infected.

But similar PCR tests for other viruses do offer some sense of how contagious an infected patient may be: The results may include a rough estimate of the amount of virus in the patient’s body.

“We’ve been using one type of data for everything, and that is just plus or minus — that’s all,” Dr. Mina said. “We’re using that for clinical diagnostics, for public health, for policy decision-making.”

But yes-no isn’t good enough, he added. It’s the amount of virus that should dictate the infected patient’s next steps. “It’s really irresponsible, I think, to forgo the recognition that this is a quantitative issue,” Dr. Mina said.

The PCR test amplifies genetic matter from the virus in cycles; the fewer cycles required, the greater the amount of virus, or viral load, in the sample. The greater the viral load, the more likely the patient is to be contagious.

This number of amplification cycles needed to find the virus, called the cycle threshold, is never included in the results sent to doctors and coronavirus patients, although it could tell them how infectious the patients are.

In three sets of testing data that include cycle thresholds, compiled by officials in Massachusetts, New York and Nevada, up to 90 percent of people testing positive carried barely any virus, a review by The Times found.

On Thursday, the United States recorded 45,604 new coronavirus cases, according to a database maintained by The Times. If the rates of contagiousness in Massachusetts and New York were to apply nationwide, then perhaps only 4,500 of those people may actually need to isolate and submit to contact tracing.

One solution would be to adjust the cycle threshold used now to decide that a patient is infected. Most tests set the limit at 40, a few at 37. This means that you are positive for the coronavirus if the test process required up to 40 cycles, or 37, to detect the virus.

Tests with thresholds so high may detect not just live virus but also genetic fragments, leftovers from infection that pose no particular risk — akin to finding a hair in a room long after a person has left, Dr. Mina said.

Any test with a cycle threshold above 35 is too sensitive, agreed Juliet Morrison, a virologist at the University of California, Riverside. “I’m shocked that people would think that 40 could represent a positive,” she said.

CORONAVIRUS SCHOOLS BRIEFING: The pandemic is upending education. Get the latest news and tips as students go back to school.

A more reasonable cutoff would be 30 to 35, she added. Dr. Mina said he would set the figure at 30, or even less. Those changes would mean the amount of genetic material in a patient’s sample would have to be 100-fold to 1,000-fold that of the current standard for the test to return a positive result — at least, one worth acting on. 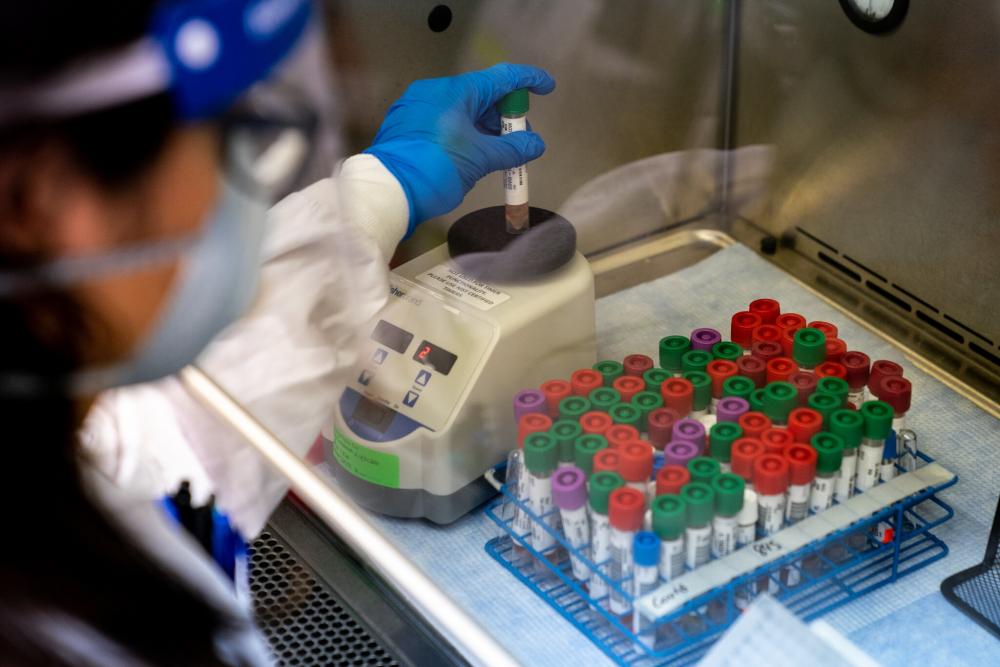 “It’s just kind of mind-blowing to me that people are not recording the C.T. values from all these tests, that they’re just returning a positive or a negative,” one virologist said.Credit...Erin Schaff/The New York Times

The Food and Drug Administration said in an emailed statement that it does not specify the cycle threshold ranges used to determine who is positive, and that “commercial manufacturers and laboratories set their own.”

The Centers for Disease Control and Prevention said it is examining the use of cycle threshold measures “for policy decisions.” The agency said it would need to collaborate with the F.D.A. and with device manufacturers to ensure the measures “can be used properly and with assurance that we know what they mean.”

The C.D.C.’s own calculations suggest that it is extremely difficult to detect any live virus in a sample above a threshold of 33 cycles. Officials at some state labs said the C.D.C. had not asked them to note threshold values or to share them with contact-tracing organizations.

For example, North Carolina’s state lab uses the Thermo Fisher coronavirus test, which automatically classifies results based on a cutoff of 37 cycles. A spokeswoman for the lab said testers did not have access to the precise numbers.

This amounts to an enormous missed opportunity to learn more about the disease, some experts said.

“It’s just kind of mind-blowing to me that people are not recording the C.T. values from all these tests — that they’re just returning a positive or a negative,” said Angela Rasmussen, a virologist at Columbia University in New York.

“It would be useful information to know if somebody’s positive, whether they have a high viral load or a low viral load,” she added.

Officials at the Wadsworth Center, New York’s state lab, have access to C.T. values from tests they have processed, and analyzed their numbers at The Times’s request. In July, the lab identified 794 positive tests, based on a threshold of 40 cycles.

With a cutoff of 35, about half of those tests would no longer qualify as positive. About 70 percent would no longer be judged positive if the cycles were limited to 30.

In Massachusetts, from 85 to 90 percent of people who tested positive in July with a cycle threshold of 40 would have been deemed negative if the threshold were 30 cycles, Dr. Mina said. “I would say that none of those people should be contact-traced, not one,” he said.

Other experts informed of these numbers were stunned.

“I’m really shocked that it could be that high — the proportion of people with high C.T. value results,” said Dr. Ashish Jha, director of the Harvard Global Health Institute. “Boy, does it really change the way we need to be thinking about testing.”

Dr. Jha said he had thought of the PCR test as a problem because it cannot scale to the volume, frequency or speed of tests needed. “But what I am realizing is that a really substantial part of the problem is that we’re not even testing the people who we need to be testing,” he said.

The number of people with positive results who aren’t infectious is particularly concerning, said Scott Becker, executive director of the Association of Public Health Laboratories. “That worries me a lot, just because it’s so high,” he said, adding that the organization intended to meet with Dr. Mina to discuss the issue.

The F.D.A. noted that people may have a low viral load when they are newly infected. A test with less sensitivity would miss these infections.

But that problem is easily solved, Dr. Mina said: “Test them again, six hours later or 15 hours later or whatever,” he said. A rapid test would find these patients quickly, even if it were less sensitive, because their viral loads would quickly rise.

PCR tests still have a role, he and other experts said. For example, their sensitivity is an asset when identifying newly infected people to enroll in clinical trials of drugs.

But with 20 percent or more of people testing positive for the virus in some parts of the country, Dr. Mina and other researchers are questioning the use of PCR tests as a frontline diagnostic tool.

People infected with the virus are most infectious from a day or two before symptoms appear till about five days after. But at the current testing rates, “you’re not going to be doing it frequently enough to have any chance of really capturing somebody in that window,” Dr. Mina added.

Highly sensitive PCR tests seemed like the best option for tracking the coronavirus at the start of the pandemic. But for the outbreaks raging now, he said, what’s needed are coronavirus tests that are fast, cheap and abundant enough to frequently test everyone who needs it — even if the tests are less sensitive.

“It might not catch every last one of the transmitting people, but it sure will catch the most transmissible people, including the superspreaders,” Dr. Mina said. “That alone would drive epidemics practically to zero.”