After HBO's I May Destroy You, some of us were empowered. Some confronted the people who violated their trust. Some started therapy. 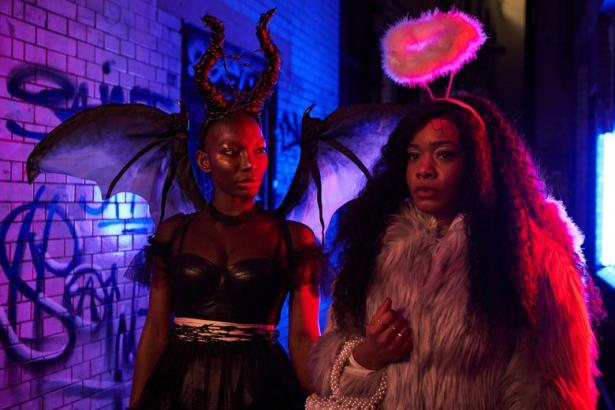 Michaela Coel and Weruche Opia in I May Destroy You. , HBO

I May Destroy You has been hailed as the undisputed show of the summer and the best TV show of the year. Whether you consider it either, one thing is certain: Michaela Coel’s traumatic, low-key hilarious creation is leaving a lasting impact on its viewers. I May Destroy You centers Black female, queer, and immigrant voices and depicts with nuance the multifaceted aspects of sexual abuse, assault, and exploitation in a manner rarely shown on television. In the course of the series’s 12 episodes, Coel pushes at the boundaries of consent from every direction there is, leaving you reevaluating previous sexual encounters and reconsidering how you might think about consent in the future.

The show is centered on Arabella (Coel), a British-Ghanaian author, social media influencer, and sexual assault survivor. In the first episode, Arabella steps out for a drink to take a break from finishing her second book. Her drink is drugged, she loses consciousness, and, as her memory returns, she realizes she was raped. (The story is loosely based on Coel’s own sexual assault, which took place while she was writing her previous series, Chewing Gum.) The season continues with Arabella using flashbacks and investigative work to figure out what happened, with her two closest friends, Terry (Weruche Opia) and Kwame (Paapa Essiedu), right by her side during the healing journey. But as time passes, we realize Kwame and Terry are processing their own sexual traumas.

Arabella, as well as the detectives assigned to her case, quickly label her assault rape. You cannot consent if you are unconscious, drugged, or physically forced. But as the show continues, its characters are involved in more complicated sexual interactions, where consent is given, and then circumstances change. Each incident forces you to question what’s wrong and what’s right, but you may end up thinking it’s all in the gray area.

I May Destroy You transformed my group chats, DMs, and weekly phone catch-ups into intense discussions on whether the characters’ consent was violated, and whether the violation was debatable or clear-cut. But what the show illuminated and my friends—who in some way or another, are all survivors— confirmed, is that it’s never uncertain if you’re the victim. (After one assault, Kwame Googles whether nonconsensual humping is rape, but he already knows something is wrong before the internet validates his feelings.) What is uncertain is whether the violation is captured within the law—and what, if any, consequences the perpetrator should face. For many people, when you’re involved in a sexual situation under any kind of false pretense, your consent was stolen. I May Destroy You’s mini consent stories put this notion on full display.

Arabella and Zain (Karan Gill) have sex, and after they finish she learns he secretly took the condom off. She’s upset, but thanks to Zain’s gaslighting, she isn’t quite sure how to process it. Subsequent to the violation, Arabella later learns that “stealthing” (removing a condom during sex without the other partner’s consent) is quite common, and is rape under U.K. law. Consent to sex with a condom does not mean consent to sex without a condom.

Kwame and Malik consent to sex with a condom. When Kwame eventually tries to leave, Malik violently shoves him on the bed and assaults him. Consent given once does not mean consent twice. Later, Kwame reveals how he lost his virginity. He was young, and two older men told him to get into the car and proceeded to have sex with him. Consent laws mean minors cannot consent to sex.

The season ends with Arabella tracking down her rapist and playing through three different possible outcomes. The last and most peaceful potential outcome involves them having sex without Arabella revealing that she is the girl he raped. You’re left wondering where this ambiguous incident falls in the consent hierarchy.

These stories reflect what the real world looks like, and have led to a variety of pieces cataloging the kinds of conversations the show should spur. For my friends and me, what would usually come as jokes and passing comments over a weekend with too many drinks came out over a 12-week reflection featuring video calls, text messages, and voice notes. We reinterpreted past experiences and thought deeply about ways to be in more control in the future. We added more consent equations into the formula: What happens if a partner is dishonest about their relationship status? What happens if your partner is dishonest about their sexual history or a past partner? What happens if your partner does not reveal their criminal history? What happens if someone does not reveal they may have an STI? What do you do if you realize, after the fact, that someone violated your consent? Do you owe forgiveness to someone who apologizes after violating your consent? The questions continued, and we realized that whenever consent is procured under false pretenses—that is, if details were withheld—consent is called into question and is likely violated. We settled on “honesty is the best policy.”

Some of us found solace seeing our lived experiences played out on television. Some of us came away empowered to stand up for ourselves when we find ourselves in situations with changing circumstances. Some of us wanted to go back to the person who violated our consent, let them know what happened, and not offer forgiveness. Some of us started therapy.

I May Destroy You has a tremendous impact on its viewers, but its impact goes even further and knocks on the door of a now-quieted uprising: the #MeToo movement. #MeToo caused a long-overdue revolution and exposed the prevalence of sexual assault and rape, but after many months, it spurred backlash when sound minds could not agree on whether some incidents are sexual assault and what the consequences should be. I May Destroy You restarts and reshapes the #MeToo conversation.

With Harvey Weinstein as its mascot, the #MeToo movement elevated hundreds of incredibly different stories and put them under the same umbrella of sexual assault. The beauty of I May Destroy You is that it forces viewers to consider the wide range of sexual abuse, categorize the incidents, and reflect on what consent should look like. The show makes clear that consent procured under any kind of false pretenses is stolen and is most likely a violation, while not labeling everyone who steals consent a monster.

Coel’s storytelling shows that although stolen consent is often flagrant for the victim, it’s not always obvious by societal standards. Where an interaction falls in the societal hierarchy of sexual violence—and, equally importantly, whether a sexual violation is punishable by law—varies by culture and country. As Arabella highlights, stealthing is considered rape under U.K. law, but only “a bit rapey” in Australia. Even so, the right consequence isn’t always clear. When Arabella realizes where Zain’s actions fit under the law, she doesn’t go to the police; instead, she exposes him in front of his family, friends, and colleagues at a book festival.

Not only does I May Destroy You prevent us from lumping Zain into the same category as Arabella’s rapist, the show introduces voices and perspectives initially left out of the #MeToo discussion. In its early days, the movement—which was founded by a Black woman—was heavily criticized for centering white, wealthy females and leaving out voices of color. Queer folks were also largely left out of the conversation, despite the prevalence of sexual abuse in the LGBTQ community. The movement also did not have space to address false accusations—something I May Destroy You addresses head-on. The survivors of I May Destroy You represent Black voices, queer voices, and working-class voices. Their intersectional perspectives are vital to the show, and to the movement as a whole.

I May Destroy You’s focus on the thorny boundaries of consent shows the commonplace side of sexual violence: violations when consent is given but information is withheld or circumstances change, violations where it is uncertain if something illegal even happened. It’s a way of inviting even more people to be able to join the movement, and to be able to say, “Me too.”

The best of movies, TV, books, music, and more, delivered to your inbox three times a week.