It’s Showtime: Rolling Up Our Sleeves to Beat Trump

Our strategy debates will continue. But we must have a laser-like focus on getting down to nitty gritty work to defeat Trump and all Trumpists, and the armed neo-nazi white supremacists that he’s empowered 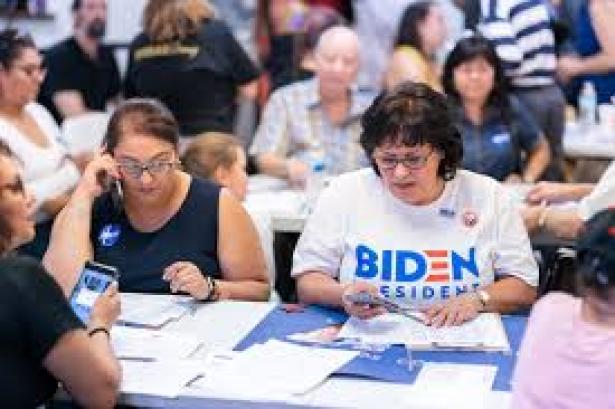 We are in an unprecedented moment in our country’s history. Will we move toward a more right-wing authoritarian fascist state, or will we defeat this threat? What we do between now and November 3 will answer that question.

Miles Taylor, former Republican chief of staff of Homeland Security under Trump, described a meeting with a Trump staffer who told him, “just wait until the second term.  It will be no holds barred.  It will be shock and awe.  We will do whatever we want.”  We got a taste of that with Trump’s encouragement of killer cops, armed vigilantes, and his Republican Convention’s hate-and-lie fest.

Our strategy debates will continue. But we must have a laser-like focus on getting down to nitty gritty work on five key tasks to defeat Trump and all Trumpists, and the armed neo-nazi white supremacists that he’s empowered:

The road to winning votes for Biden-Harris is direct voter contact. COVID-19 nixes door-knocking, so we must phonebank, text and send postcards.

Many groups are organizing phonebanking to voters, especially in battleground states. That is where the presidential election will be won or lost.  Many unions, the Poor People’s Campaign, Generation Rising, Seed the Vote, Water for Grassroots, state-based organizations like Pennsylvania Stands Up, LUCHA (Arizona) and New Florida Majority, and other efforts such as Flip the West, Heartland Rising, and Swing Left, have programs underway. So does Biden’s campaign, and Democratic Party organizations in every state. Activists can call from any state to voters in battleground states.

I decided to test the voter-calling program of the Biden campaign. I had some initial difficulty getting started, but once I got into the program and followed the prompts, it went more smoothly. The Biden campaign offers phonebanking training.

The Biden-Harris campaign has identified six battleground states: Arizona, Florida, Michigan, North Carolina, Pennsylvania and Wisconsin. Other battleground states will likely be added as November approaches. The phonebanking format has been changed slightly but begin by going to joebiden.com, and then on the first page at the top to “Continue to Joebiden.com,” then “Action Center,” and “Make Phone Calls for Joe.”

I live in California, but all my calls have been to voters in battleground states. I began calling on Monday, August 3, and spent one hour a day, five days a week. For those two weeks I made 192 calls to voters in Pennsylvania in nine one-hour shifts. I averaged slightly over 21 calls each shift. Many voters didn’t answer, but I left a voice mail message from the script to vote for Biden (and Harris when she was added) and “other Democrats up and down the ticket in Pennsylvania” for 133 other voters. I spoke directly to 25 voters. All 25 said they would vote for Biden. Twelve volunteered.

Trump won Pennsylvania by 44,292 votes in 2016. If we had 500 co-workers, friends and allies call Pennsylvania voters one hour a day for five days a week, from my first day until election day, we would have talked to or left a message with 79,000 voters. If we persuaded just over half of those voters to vote for Biden-Harris, who may not have voted otherwise, that could make the difference in defeating Trump in Pennsylvania and depriving him of Pennsylvania’s 20 Electoral College votes. That could mean Trump losing the Electoral College and the election. Many other anti-Trump and pro-Biden people are calling voters in battleground states too, so Biden’s “yes” votes will be multiplied in all of them.

The Biden campaign changed to a broader universe of voters, so the responses are more varied, from supportive, to indifferent, and even some who are negative. But this allows us to weed out the negative and “No” voters so the campaign can concentrate on consolidating “Yes” voters and getting their commitment to vote.

We can and must defeat Trump decisively. But without flipping the Senate, nothing good will get passed into law. Arizona is a battleground state in the presidential election, and a target to end GOP control of the Senate. Trump won Arizona by 91,234 votes in 2016. Current polls show Biden beating Trump by three percentage points there, though polls change. A high number of calls to Arizona can help shift Arizona’s 11 Electoral Votes to Biden-Harris, and help Senate candidate Democrat Mark Kelly knock out the Republican incumbent, Martha McSally. Polls currently show Kelly with a 4% lead.

Colorado is another battleground state, not yet designated by the Biden campaign, but it is a swing state where another U.S. Senate seat is contested. By the end of July, Biden was ahead of Trump 54% to 40% in Colorado. Those polls are tightening. Massive phone calls to voters in Colorado could push Biden-Harris over the top and deliver Colorado’s nine Electoral College votes to Biden.  It is also possible to flip Colorado’s Senate seat. Democratic Senate challenger John Hickenlooper is ahead of incumbent Republican Senator Cory Gardner by 48%-42% as I write this. Polls can change or be inaccurate, so massive get-out-the-vote calling must be done daily until November 3, not only in Arizona and Colorado, but in all the battleground states.

Democrats need 3-4 Senate pick-ups in order to gain control of the Senate.  This would make Congress more open to grassroots organizing and pressure by our people’s movements to introduce and pass crucial progressive legislation.

Besides the Senate, expanding Democratic control of the House – and electing more Representatives who will join the Squad in pushing radical programs and inspiring grassroots activism – is a key task. Ending GOP control of as many state legislatures and governorships as possible is a priority, especially with 2021 being a redistricting year. Progressives and socialists will be contending for other offices at the local and state level, and the more that win the stronger the left will be in both the short and long run.

Voter suppression has been with us since the founding of our country, by denying the right to vote to Blacks, women, ex-offenders, and others. The GOP has mastered new techniques of voter suppression, detailed expertly by Professor Carol Anderson in her book, “One Person, No Vote.” The latest and most far-reaching act of voter suppression is Trump’s effort to destroy the U.S. Postal Service and disenfranchise many millions of voters who want to vote by mail, especially with the COVID-19 health threat.

If tampering with mail ballots doesn’t work, Trump is laying the groundwork to steal the election through other forms of voter manipulation and suppression tactics, racist fear-mongering, and physical force.

Tim Wirth, former Senator from Colorado, outlined a likely scenario in a July 3 Newsweek article. Wirth suggests that if Trump loses the election, he will declare that there was massive voter fraud in states that Biden won, corrupt mail ballots, and Chinese “interference” – all without a shred of evidence. After manufacturing a hysterical atmosphere and ginning up his supporters, Trump would declare a national emergency and invoke presidential emergency powers. The December 1 deadline for states to designate electors to the Electoral College would pass without a resolution of the alleged vote “dispute,” which would then go to the House of Representatives. But presidential election disputes are not decided by counting one vote for every Congressperson, but by giving each state one vote based on its party majority. Since 26 states have a Republican majority, and 24 states have a Democratic majority, the Republican majority states can “outvote” the Democratic majority states and declare Trump the winner.

If this scenario doesn’t work, Retired US Army Colonial Lawrence Wilkerson speculates that Trump may be planning to stay in office by force, posing the question, what if Trump calls his armed right-wing vigilantes into the streets? Wilkerson says there could be bloodshed. If Trump gets support from federal armed forces, and combines them with his vigilantes, that could pose a very serious threat to peace, democracy, and our country – resulting in a fascist coup. One good piece of news is that active duty military troops favor Biden over Trump by 49.9% to 37.8% in a poll by Military Times in late July-early August of 2020, and Biden’s lead is increasing. But if Biden’s military supporters are passive, and Trump’s military supporters act, all bets are off. The best defense is to destroy Trump at the polls, and mobilize mass resistance.

Both left and mainstream organizations have begun to prepare for any “steal the election” scenario. See the Protect the Results campaign and “What If Trump Won’t Leave?” by Frances Fox Piven and Deepak Bhargava.  Let’s learn their lessons.

Successfully removing Trump from the White House will be a big victory. It will energize the people’s movements. While working for this triumph, we need to do all of the tasks discussed here in a way that strengthens grassroots social movements and builds stronger infrastructure and unity on the left.

Formations like the recently organized United Against Trump alignment, which brings together Center for Popular Democracy Action, People’s Action, Mijente, Black Voters Matter and a number of other groups should be strengthened. Forging new progressive alliances, as well as building greater unity among those groups and individuals whose long-range goal is socialism, should be high on our agenda as well.

Professor George Lakey described how the Norwegian people stopped a home-grown fascist movement from seizing power in Norway in the 1930’s. He wrote, “Progressive movements of farmers and workers, joined by middle class allies, launched nonviolent direct action campaigns that made the country increasingly ungovernable by the economic elite.”

Today in the U.S. the Black-led multi-racial uprising sparked by the police murder of George Floyd is leading the way. Workers’ strikes, tenants’ strikes, boycotts, and other acts of resistance and non-cooperation must be encouraged, organized and supported.   We must work hard, including calling millions of voters in battleground states daily until November 3, to deliver a crushing electoral defeat to Trump and all the Trumpists – so massive that it will be impossible for Trump and his supporters to force their will on the American people. That is our task. Defeat the Trumpists, and we can build a better tomorrow.

Paul Krehbiel is a life-long trade union, anti-racist, and socialist activist. He is the coordinator of Los Angeles Labor for Bernie, a member of the National Alliance Against Racist and Political Repression, and national co-chair of the Committees of Correspondence for Democracy and Socialism.