In 1970 Chicanos protested how US casualties in Vietnam disproportionately consisted of young men from their communities in the Southwest. Now, they protest the killings of Latina and Latino soldiers. 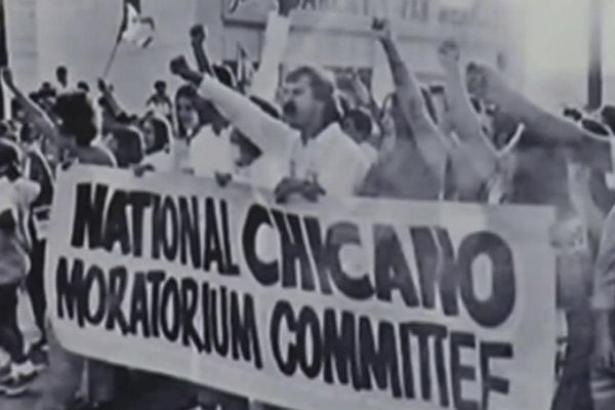 Last month hundreds of people marked with moxie the 50th anniversary of the August 29th, 1970 Chicano Moratorium in East Los Angeles. To protest our nation’s war in Vietnam, racism, and police brutality, starting at 9 am that day nearly 30,000 ethnic Mexicans and their allies from all over the Southwest took to the streets in a 3-mile peace march through the boulevards of Atlantic and Wilshire.

Among many slogans, they chanted and held signs expressing, “¡Raza Si! ¡Guerra No!,” “Our Fight Is Not in Vietnam,  “Chicano Power,” and “Stop Chicano Genocide!”

In the spirit of the Black Lives Matter movement since George Floyd’s killing by now-former Minneapolis police officer Derek Chauvin this May, the protests of Chicanos today concentrate on law enforcement’s abuse of power.

In 1970 Chicanos protested how US casualties in Vietnam disproportionately consisted of young men from their communities in the Southwest. Dr. Ralph Guzmán documented that from 1961 to 1967 their brothers and friends made up 19.4 percent of those killed in action, when this group was only 10 to 12 percent of the national population.

Now, they protest the killings of Latina and Latino soldiers. Army Private First Class Vanessa Guillen stationed at Fort Hood being one and Specialist Enrique Roman-Martinez of the 82nd Airborne Division at Fort Bragg another. Roman-Martinez’s sister and mother delivered impassioned speeches at Atlantic Park in East L.A. before the commencement of the 50th-anniversary march this past August 29th. They criticized the Army for its less-than-transparent investigation and decried only having received Enrique Roman-Martinez’s partial remains.

In 1970, the Brown Berets of Los Angeles, along with UCLA student Rosalio Muñoz and others formed the National Chicano Moratorium Committee and organized many demonstrations in Southern California. But the August 29th march and rally at the then-named Laguna park was the granddaddy of them all.

Then tragedy struck. With the pretext of a responding to a robbery at a nearby liquor store, Los Angeles sheriff’s deputies and police stormed the peaceful assembly with batons and teargas. The law enforcement-instigated riot resulted in three deaths and hundreds arrested and abused. Ruben Salazar, a former Los Angeles Times reporter turned KMEX-TV news director, considered the voice of the Chicano community, was one of the slain as he stopped at the Silver Dollar Bar far away from the melee, on Whittier Blvd, to decompress from law enforcement’s merciless assault.

After several contradictory official explanations, it was found that Los Angeles County sheriff’s deputy Thomas Wilson killed Salazar with a 10-inch teargas projectile designed to pierce walls. Many in the community contended then, and believe now, that the powers that be in Los Angeles conspired to assassinate Salazar due to his refusal to temper his reportage of law enforcement misconduct.

In adjacent Ventura County, the Chicano community also viewed Salazar’s homicide as the system’s culling of its leadership. In a September 3, 1970 letter to the Ventura County Star-Free Press titled, “Siesta Is Over!” Arthur Gómez of Santa Paula addressed Governor Ronald Reagan and local elected officials when he stated, “Yes, the siesta is over! The siesta was broken by the murder of two innocent Mexican nationals in a Los Angeles hotel and the 10-inch projectile that shattered Ruben Salazar’s head… One day we shall not have our leaders murdered. One day we shall not have our children made ashamed of being part Mexican. One day we shall have justice and dignity.”

Intrepidly, Chicano men and women conducted a peace march in Oxnard on September 19th,  twenty-one days after law enforcement’s rampage in East Los Angeles. Approximately, 1,000 marchers from all walks of life, different communities, and a span of generations again took to the streets.

In their planning that started weeks, if not months, in advance of the August 29th tragedy, the organizers declared the community’s goal of liberation as well as the end of Chicano genocide in Vietnam and police brutality.

To avoid an August 29th-like catastrophe, the Brown Berets of Oxnard, the Ventura County chapter of the Mexican American Political Association, and MEChA representatives from local colleges and high schools met in advance with law enforcement.

The week leading up to the “La Raza” (the People’s) peace march, men and women of the Brown Berets leafleted neighborhoods to promote the demonstration and, to further ensure amity at the event, disseminated a code of conduct to the public, the Oxnard Police Department, and media.

On the day of the demonstration, people paraded boldly through the streets La Colonia barrio from La Virgin de Guadalupe Church and the downtown district with a coffin that symbolized 8,000 ethnic Mexican servicemen killed in Vietnam. The procession ended at the city’s Community Center. There, as national chairman for the Chicano Moratorium Committee, Muñoz characterized the Vietnam War as the “systematic murder” of Chicanos.

La Raza Moratorium Committee’s communication with law enforcement and the press garnered the community’s goodwill for the event’s achievement. Indeed, the Oxnard Press-Courier commended the organizers in an editorial as it acknowledged the disproportionate ethnic Mexican casualty rate in the Vietnam War. It also complimented in a backhanded manner law enforcement in general, for its “diplomacy and restraint.”

Fifty years later, Chicanos are proud of being ethnic Mexicans. But with the controversial homicides of Latino soldiers and civilians such as PFCs Guillen and Roman-Martinez on the one hand and Andres Guadardo, shot in the back by a LA County sheriff’s deputy, on the other, we, Chicanas and Chicanos, still await justice.

Frank P. Barajas is a Professor of History at California State University Channel Islands. He has a forthcoming book with the University of Nebraska Press titled Mexican Americans with Moxie: A Trans-Generational History of El Movimiento Chicano in Ventura County California, 1945-1975.

History News Network depends on the generosity of its community of readers. If you like HNN please consider making a donation today!

HNN provides multiple ways to make a donation. You can do so ...