At Pentagon, Fears Grow That Trump Will Pull Military Into Election Unrest 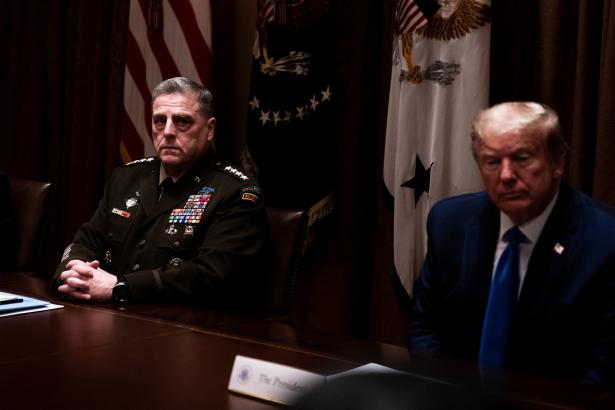 General Mark Milley of the Joint Chiefs of Staff and President Trump at the White House in May,Anna Moneymaker/The New York Times

WASHINGTON — Senior Pentagon leaders have a lot to worry about — Afghanistan, Russia, Iraq, Syria, Iran, China, Somalia, the Korean Peninsula. But chief among those concerns is whether their commander in chief might order American troops into any chaos around the coming elections.

President Trump gave officials no solace on Wednesday when he again refused to commit to a peaceful transfer of power no matter who wins the election. On Thursday he doubled down by saying he was not sure the election could be “honest.” His hedging, along with his expressed desire in June to invoke the 1807 Insurrection Act to send active-duty troops onto American streets to quell protests over the killing of George Floyd, has caused deep anxiety among senior military and Defense Department leaders, who insist they will do all they can to keep the armed forces out of the elections.

“I believe deeply in the principle of an apolitical U.S. military,” Gen. Mark A. Milley, the chairman of the Joint Chiefs of Staff, said in written answers to questions from House lawmakers released last month. “In the event of a dispute over some aspect of the elections, by law, U.S. courts and the U.S. Congress are required to resolve any disputes, not the U.S. military. I foresee no role for the U.S. armed forces in this process.”

But that has not stopped an intensifying debate in the military about its role should a disputed election lead to civil unrest. 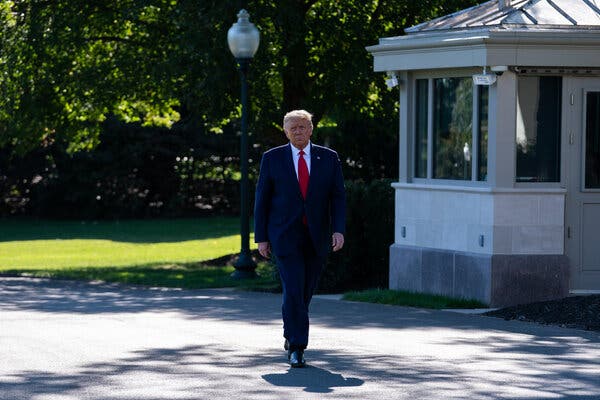 Mr. Trump refused this week to commit to a peaceful transfer of power after the November election.Credit...Anna Moneymaker for The New York Times

On Aug. 11, John Nagl and Paul Yingling, both retired Army officers and Iraq war veterans, published an open letter to General Milley on the website Defense One. “In a few months’ time, you may have to choose between defying a lawless president or betraying your constitutional oath,” they wrote. “If Donald Trump refuses to leave office at the expiration of his constitutional term, the United States military must remove him by force, and you must give that order.”

Pentagon officials swiftly said such an outcome was preposterous. Under no circumstances, they said, would the chairman of the Joint Chiefs of Staff send Navy SEALs or Marines to haul Mr. Trump out of the White House. If necessary, such a task, Defense Department officials said, would fall to U.S. Marshals or the Secret Service. The military, by law, the officials said, takes a vow to the Constitution, not to the president, and that vow means that the commander in chief of the military is whoever is sworn in at 12:01 p.m. on Inauguration Day.

But senior leaders at the Pentagon, speaking on the condition of anonymity, acknowledged that they were talking among themselves about what to do if Mr. Trump, who will still be president from Election Day to Inauguration Day, invokes the Insurrection Act and tries to send troops into the streets, as he threatened to do during the protests against police brutality and systemic racism. Both General Milley and Defense Secretary Mark T. Esper opposed the move then, and Mr. Trump backed down.

The concerns are not unfounded. The Insurrection Act, a two-century-old law, enables a president to send in active-duty military troops to quell disturbances over the objections of governors. Mr. Trump, who refers to the armed forces as “my military” and “my generals,” has lumped them with other supporters like Bikers for Trump, who could offer backup in the face of opposition. 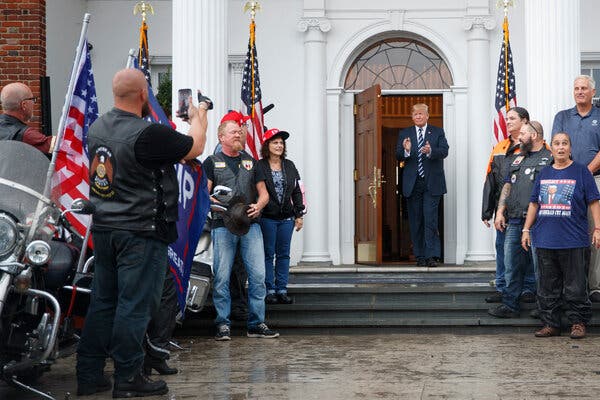 Mr. Trump hosting members of Bikers for Trump at Trump National Golf Club in Bedminster, N.J., in 2018. He has lumped the group with the armed forces as being able to offer backup in the face of opposition.Credit...Tom Brenner for The New York Times

Several Pentagon officials said there could be resignations among many of Mr. Trump’s senior generals, starting at the top with General Milley, should troops be ordered into the streets at the time of the election.

The Air Force chief of staff, Gen. Charles Q. Brown, the officials said, would also be unlikely to carry out those orders. In the days after the killing of Mr. Floyd in police custody, General Brown released an extraordinary video in which he spoke in starkly personal terms about his experience as a Black man in America, his unequal treatment in the armed forces and the protests that gripped the country.

“I’m thinking about protests in my country ’tis of thee, sweet land of liberty, the equality expressed in our Declaration of Independence and the Constitution that I have sworn my adult life to support and defend,” General Brown said. “I’m thinking about a history of racial issues and my own experiences that didn’t always sing of liberty and equality.”

Protests and occasional violent confrontations, including one in Portland last month that turned deadly and one in Louisville this week after a grand jury in Kentucky declined to charge any officers in the killing of Breonna Taylor, have continued to roil the country and are further increasing concerns at the Pentagon.

“The main fear is that Portland is Off Broadway and that Broadway would be something here” in the capital, said Derek Chollet, who was an assistant secretary of defense under President Barack Obama. “The idea is that you are going to have a lot of kindling out there and Trump is doing nothing to keep that from getting more flammable.”

This year, Rosa Brooks, a Georgetown University law professor and a Defense Department official under Mr. Obama, led a group of about 100 former national security officials and election experts from both parties in exercises to simulate the most serious risks to a peaceful transition of power.

In one, they contemplated what would happen if a president ordered National Guard units or active-duty military personnel into cities to “restore order.” There was no clear result, but the exercise itself attracted sharp criticism from far-right groups, which accused the organizers of trying to undermine Mr. Trump and interfere with the election.

Inside the Pentagon, whose leaders are well-known for making plans, Defense Department officials said there had been no preparations for military force during the elections.

“The planning they should be doing is how to prevent playing a role,” said Devin Burghart, the president of the Institute for Research and Education on Human Rights and an expert on white nationalist movements.

Others who worked at the Pentagon agree. “I know that Milley is trying to think his way through, but I have my doubts he can,” said John Gans, who served as chief speechwriter to the defense secretary in the Obama administration. “The problem is that when the military doesn’t want to do something, they don’t like to think about it.”

He added: “The Pentagon plans for war with Canada and a zombie apocalypse, but they don’t want to plan for a contested election. These are huge questions that have an impact on the reputation of the institution.”

The confrontation in Lafayette Square near the White House in June crystallized for the Defense Department just how close to the precipice the military came to being pulled into a domestic political crisis. Military helicopters and armed members of the National Guard patrolled the streets next to federal agents in riot gear so that the president, flanked by Mr. Esper and General Milley, could walk across the square to hold up a Bible in front of St. John’s Episcopal Church. Current and former members of the armed forces were outraged. 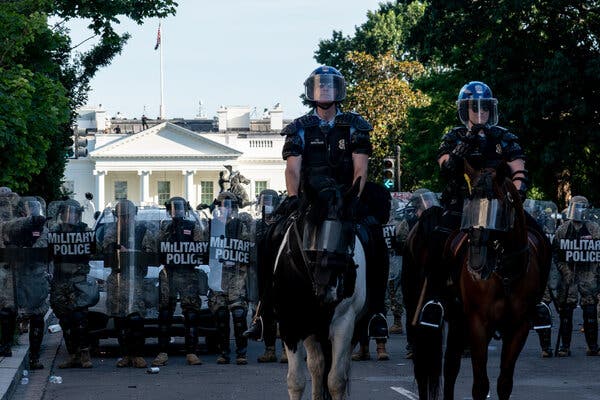 The police advancing on protesters to clear a path for Mr. Trump to walk to St. John’s church near the White House in June.Credit...Erin Schaff/The New York Times

“It sickened me yesterday to see security personnel — including members of the National Guard — forcibly and violently clear a path through Lafayette Square to accommodate the president’s visit outside St. John’s Church,” Adm. Mike Mullen, the chairman of the Joint Chiefs of Staff under President George W. Bush and Mr. Obama, wrote in The Atlantic. “This is not the time for stunts.”

Both men, but General Milley especially, were so sharply criticized by former military and Pentagon leaders for taking part in the walk that they spent the days afterward in serious damage control.

Mr. Esper held an extraordinary news conference in which he broke with the president and said that active-duty troops should not be sent to control protests. His words so angered Mr. Trump that the president had to be persuaded not to fire him, aides said at the time.

General Milley publicly apologized for the walk across the park. “I should not have been there,” he said in a video address to National Defense University. His apology also infuriated Mr. Trump.

Both men are still in their jobs for now. On Thursday, the general reiterated his position on keeping the military out of the 2020 election when he urged American service members around the world during a video question-and-answer session to “keep the Constitution close to your heart.”

His words were subtle, but those watching knew what he meant.

Jennifer Steinhauer has been a reporter for The New York Times since 1994. She has worked on the Metro, Business and National desk, and served as City Hall bureau chief and Los Angeles bureau chief before moving to Washington in 2010. She is the author of a novel, two cookbooks and the upcoming book "The Firsts" the story of the women of the 116th Congress.

In 2015, she was part of the team that won the Pulitzer Prize for international reporting, for her work in Liberia during the Ebola epidemic. She is also the winner of of the George Polk award for health reporting (2015) and the Overseas Press Club Award (2015).

Sign up here to receive the New York Times' At War weekly newsletter.