A key way to build broader support for the Green New Deal among organized labor, some labor experts say, is to help workers change who head the Laborers, Mine Workers and Electrical Workers unions, which oppose the Green New Deal. 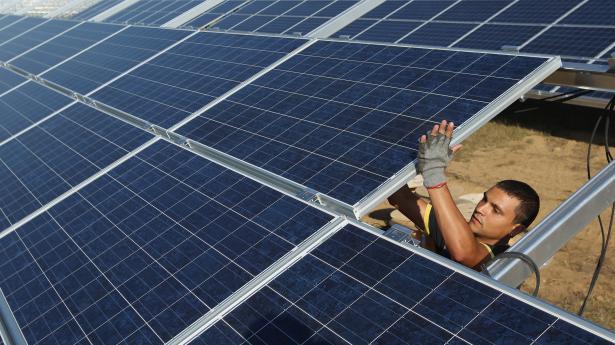 This should be a unionized job!, Sean Gallup (Getty Images)

There’s a persistent conservative myth that the clean energy transition must come at the expense of employment. Nothing could be further from the truth, though. The Congressional resolution on a Green New Deal, introduced by Rep. Alexandria Ocasio-Cortez and Sen. Ed Markey last February, includes a proposal guarantee employment to all those who want it. And increasingly, climate activists are focusing on the potential to create millions of good jobs in clean energy.

These pro-worker proposals—and the knowledge that it will take an economy-wide effort to kick fossil fuels and the curb to avert climate catastrophe—have won the platform support from swaths of the labor movement. Yet some powerful unions still oppose the sweeping proposal. The president of the AFL-CIO—the largest federation of unions in the U.S.—criticized the Green New Deal resolution, and heads of the Laborers’ International Union of North America, the Unit­ed Mine Work­ers of Amer­i­ca, and the Inter­na­tion­al Broth­er­hood of Elec­tri­cal Work­ers have outright opposed it. That poses a political roadblock to achieving the necessary transformation of the U.S. economy.

“The Green New Deal movement needs broader support from the labor movement to be successful,” Joe Uehlein, founding president of the Labor Network for Sustainability and former secretary-treasurer of the AFL-CIO’s Industrial Union Department, said. “As long as labor isn’t a central player in this movement, they will they have the power to block pretty much anything. on Capitol Hill. They contribute in electoral campaigns. They’re a very powerful force.”

This summer, the Amer­i­can Fed­er­a­tion of Teach­ers, the sec­ond largest educators’ union in the coun­try, passed a res­o­lu­tion backing the Green New Deal. Their endorsement followed earlier ones from the Asso­ci­a­tion of Flight Atten­dants-CWA, Ser­vice Employ­ees Inter­na­tion­al Union, and Nation­al Nurs­es Unit­ed. It’s not just the upper echelons of these unions that support the platform: a 2019 Data for Progress poll shows that the Green New Deal enjoys overwhelming support from rank and file union members, too. Yet opposition from some trade unions and federations remains.

This is certainly sparked by union leaders’ concerns about losing membership, but in some cases, it may also be due in part to some labor leaders’ personal politics. LIUNA’s leadership has praised Donald Trump and backed the Dakota Access Pipeline. Richard Trumka, president of the AFL-CIO supported the U.S.-Mexico-Canada Agreement despite its weak protections for workers. He has also willingly engaged with Trump, though he’s distanced himself from the president more recently.

In these cases, a key way to build broader support for the Green New Deal among organized labor is to help workers change who is heading these organizations. For instance, there are rumors that Trumka is considering stepping down by the end of his current term, which would leave his seat open next year. If this comes to pass, there are hints that Sara Nelson, current head of the AFA-CWA who has been a consistent and vocal Green New Deal supporter, will run to be his successor. Successfully electing her would be a longshot, but this week, labor organizer Dave Kamper wrote a piece laying out a roadmap to getting it done.

“Union leaders at every level, from the shop floor to the international, should be encouraged to speak openly about what they want out of the AFL-CIO,” he wrote. “Rank-and-file leaders should press for open meetings and discussions at every level of the union. Potential candidates for the AFL-CIO presidency should be asked to state their views on crucial questions.”

This will all take some serious organizing, and the climate movement could help make that happen, consistently engaging labor from the local level up to the international ranks.

That need not be limited to organizing in support of more progressive leadership. By speaking with workers more broadly about the potential for job creation in the Green New Deal, climate activists could inspire members to push their unions to back the plan. It’s true that the plan could eliminate many currently existing unionized jobs. But with the market for dirty energy crashing monumentally and energy companies laying off workers with few protections in the face of that economic hardship, it’s becoming clearer than ever that jobs in the extractive industry are already under threat.

Climate organizers will also have to address union members’ real concerns. It’s not enough to say that the Green New Deal will fight for workers’ rights. Climate groups will need to work with labor groups and agree to a plan to support them.

Though that 2019 Data for Progress poll shows that while the Green New Deal has broad worker support, there are signs of worker skepticism in some areas where the fossil fuel sector reigns. Peer-reviewed research on Wyoming’s Powder River Basin, the largest coal mining region in the U.S., showed that workers remain skeptical of just transition policies—or policies to “mitigate these losses and provide an equitable transition away from fossil fuel extraction and use”—even as they saw coal plants in the state shut down and workers laid off with few benefits.

Similarly, when the largest oil refinery on the East Coast shuttered after an explosion last year, hundreds of workers were laid off. Environmental justice organizers rightfully praised the toxic plant’s closure, but in doing so, some refinery workers expressed frustration that those organizers didn’t fight harder to protect those who lost their jobs.

“You can understand why people are concerned,” J. Mijin Cha, a professor of urban and environmental policy at Occidental College and a fellow at the Cornell University Worker Institute who conducted the research on the Powder River Basin, said. Jobs in the fossil fuel industry can pay well, and workers are often left with few opportunities if a plant, refinery, or mine is the biggest employer in town.

Central to the principles of the Green New Deal is prioritizing a just transition for laid-off fossil fuel workers so they don’t have to go through that pain. But in the absence of federal regulations requiring these protections, much of these fights will have to happen at the local level.

“There is the plant-by-plant organizing that has to happen, so when we know that these plants are shutting down, there can be specific efforts to push for a concrete transition,” Cha said. “And there also has to be a more coordinated effort on a national level, bringing together a broad-based coalition so that when we have meaningful climate policy on the table, we have the support. That will take organizing. Real, deep organizing. None of it is easy and there are no shortcuts.”

There are successful examples of this taking place in the energy industry. In 2017, a coalition of labor and climate activists secured a landmark victory in the agreement to shut down Diablo Canyon, California’s last nuclear power plant. The plant workers’ union, IBEW Local 1245, worked with local environmental organizers from Friends of the Earth to negotiate an deal securing workers a 25% retention bonus for keeping their jobs until the plant closed, early retirement incentives, and a retraining fund for workers with a job placement program at other energy sites through the state.

“They also got a commitment for the energy generated from Diablo Canyon to be replaced with renewable energy,” said Cha. “Labor and environment groups stuck together and secured a better transition plan because of it.”

When fossil fuel plants shut down, it’s often not just the workers at those plants who can be put at risk of losing their jobs. Throughout states like Texas and Wyoming—where energy is a major part of the economy—local governments’ and public employees’ interests are also bound up in dirty energy because tax revenue from oil and gas companies furnish things like schools. To win support from all parts of the labor movement, the climate movement must also grapple with this reality.

“Officials often use that as a scare tactic to build support for plants,” said Cha. “But I think we now have the information that we need to create such a transition policy to address all these issues.”

There have been successful fights on this front, too. When the Huntley coal plant in Tonawanda, New York was slated for shutdown five years ago, officials said public sector would lose their jobs as a result since the plant was also the town’s largest taxpayer. To fight back, local public unions and environmental groups worked together to pass an economic development plan to create new jobs, and push the state of New York to provide funds to replace the immediate gap in revenue.

“That’s what can happen when you have labor and environment [organizations] on board,” said Cha. “But you need the relationships to make that happen.”

Of course, the Green New Deal’s energy policy is not merely about moving away from fossil fuels, but also replacing those fossil fuels with clean alternatives. Building out all that new infrastructure will create massive opportunities for employment. America’s clean energy sector already employs more people than their dirty counterpart, and research shows that it could expand to create over 40 million more jobs.

But currently, the vast majority of clean energy jobs are not unionized. That’s true of fossil fuel jobs, too, but the transition presents a massive opportunity for labor organizations to grow their dues-paying membership.

“Boosting union density in renewables is of course a good idea,” said Uehlein.

Right now, many green firms aren’t exactly friendly to labor. Tesla, for instance, is notorious for its anti-worker policies. By working with clean energy employees to help them organize, the climate movement could not only build union support for the Green New Deal, but also help ensure these workers are able to advocate for themselves in a fair and democratic manner.

“Environmentalists have to be willing to take on green capital,” said Uehlein. “On this question of unionization, they’ve got to be squarely on the side of labor, and make that clear to everyone in the green industries.”

Uehlein has worked in the climate and labor movements for decades. Over that time, he said he’s seen massive growth in mutual understanding between the two groups.

But to win a Green New Deal, those relationships will have to deepen and strengthen even further.

“There’s no shortcut around organizing and building trust,” said Cha.