The California governor vetoed a bill that would have provided some of the 28,000 recently laid off Disney workers (and others) with additional COVID-19 work protections. 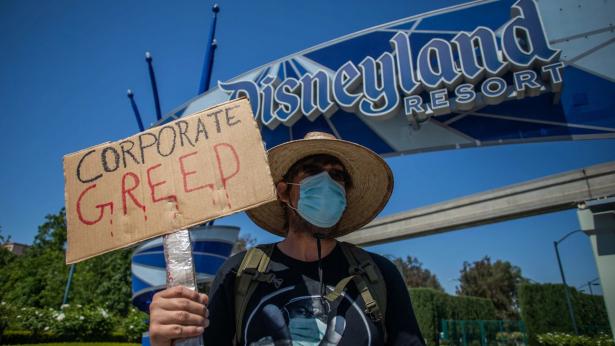 Aracely Diaz was at home with her husband and kids when the email arrived, announcing that Disney would lay off 28,000 workers. Diaz has worked as a housekeeper at the Disneyland Hotel in Anaheim, California for 19 years. So had her husband, Micael Diaz. The next morning, the couple woke up at 6:30 in the morning, got in their car, and sped north on the I-5 to Sacramento.

“It was a shock—we weren’t expecting this,” the 48-year-old said in Spanish. “But we told our kids, ‘Hey, we’re going to go out there. We’re doing this because we want to fight for ourselves. We have to make sure that our jobs are protected.’”

By mid-afternoon, they had joined a dozen of their coworkers at a large caravan processing around the State Capitol. Members of CLUE—Clergy and Laity United for Economic Justice— had arranged a vigil to last through the night.

Gov. Gavin Newsom had until midnight PT on Sept. 30 to decide on a bill that would determine thousands of jobs statewide. If passed, Assembly Bill 3216, nicknamed the Right to Recall, would grant laid-off workers the first chance to be rehired, if and when their employers returned to regular operations. (Newsom did not respond to requests for comment on the bil).

Outside, the caravan marched around the building. “I see a lot of red shirts,” Diaz said, referring to the tees of her hospitality union, Unite Here! Local 11. Some attendees held signs that read “Support AB3216;” one painted their car to say “10 Years of Service!” Other workers had launched a hunger strike in the two days before the decision.

A hundred miles south in San Jose, Ash Kalra, a member of the California state Assembly, had been fasting for 48 hours. Kalra, who authored the bill, hadn’t eaten since Monday evening. “I’m fasting in solidarity with our hotel workers,” Kalra said on the phone from his car, en route to the vigil. “It was an easy choice for me, because they’re fasting for a bill that I authored. I can’t possibly have people fasting for my bill unless I’m willing to do the same.”

He has fasted before—last year, Kalra and a few other legislators honored the 50th anniversary of the Poor People’s Campaign by abstaining from food for as many hours. But this marked his first hunger strike for a specific bill.

“I feel good, in terms of the fast,” Kalra said. “It feels better today than yesterday. The first day tends to be the hardest part. I’ve been drinking water, so it's not a complete fast.”

The bill, which passed both houses of the California legislature, would apply beyond the employees recently laid off at Disney. It would expand protections for staff at hotels, airports, and event centers, as well as janitorial, security, and maintenance workers.

The Disney workers' caravan/vigil at the California State Capitol on Sept. 30, 2020.

The legislation also grants an additional 10 days of paid sick leave and provides for job-protected leave so workers can care for themselves or family members affected by COVID-19. Some California cities have already passed versions of the law—San Diego, Oakland, Santa Monica, and Los Angeles among them.

But the whole state is not on board. The California Chamber of Commerce put AB3216 on their annual “job killers” list, claiming the mandate, “Imposes an onerous and stringent process for specific employers to return employees to the workforce, which will delay rehiring and subject employers to litigation for any alleged mistakes.”

I will fast until the bill is signed or until midnight, which will bring it to 54 hours. But I’m hoping I get a chance to eat before midnight...

“It’s a lot easier to label something a ‘job killer’ than to actually sit down and figure out how to save jobs,” Assemblymember Kalra said. “It’s literally a job saver, because it ensures that these people’s jobs will be saved. We’re not telling hotels who to hire—these are people who were already working those jobs, and were laid off through no fault of anyone.”

Outside the capitol, Diaz representatives from several organizations sat at the vigil. The bill has gotten support from the ACLU, the California Work and Family Coalition, and Jesuit West, which presented a letter to Gov. Newsom earlier this week. But it remained unclear how he would decide. “We don’t know,” said Maria Hernandez, a Unite Here! representative. “We’ll have to see. We haven’t heard anything. He has until midnight.”

“No one from the governor’s office has spoken to us,” Diaz said. “Right now, we’ve already walked around the whole capitol in a procession. There’s clergy here in support and solidarity with us. We’re just going to have a vigil all day today and throughout the evening.”

The Disney workers' caravan/vigil at the California State Capitol on Sept. 30, 2020.

If the governor doesn’t sign before the deadline, a rule in the legislature will allow the bill to pass into law. But it’s been years since a governor has left a bill unsigned.

“I will fast until the bill is signed or until midnight, which will bring it to 54 hours. But I’m hoping I get a chance to eat before midnight,” Kalra said. “I do not have any dinner plans, but I have a couple snacks here—some trail mix and chips—so that if the bill is signed, I have things I can snack on quickly.”

As it turned out, Kalra would not have to wait long. Just before 8:00 p.m., he got word that Gov. Newsom had vetoed the bill.

“Governor Newsom’s veto of AB 3216 is devastating news to the tens of thousands of workers across our state who have been laid off during this pandemic,” Kalra said in a statement. “On a day when Disney announced that it would be laying off over 28,000 employees and when reports suggest that California’s economic recovery could take at least two years, this feels like a missed chance at a recovery for all.”

Got a tip? Send it to The Daily Beast here.