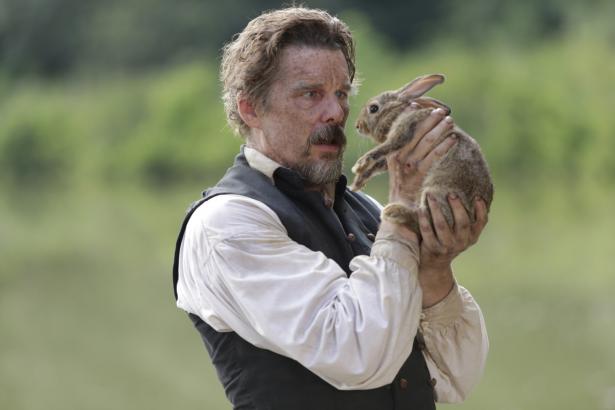 There’s something about a man, about to be hanged for treason, using his final words to proclaim, “What a beautiful country,” that speaks so well to the conflicted sense of present-day patriotism. After all, America again finds itself in need of, and perhaps already in the midst of, a revolution, and those fighting the good fight are fed up with idly watching the United States live down to the selfish interests of its controlling party, rather than live up to its full potential. Patriotism means supporting and defending a country from those working to destroy its ideals, but so often is the word co-opted to encourage blind loyalty — to leaders, to the flag, to symbols rather than principles — that it’s not so easy to go around touting American patriotism.

So hearing the soft intonation of Ethan Hawke’s wild-eyed, scraggly haired John Brown — looking exactly like a man about to arrive at the literal end of his rope — speak so sincerely about the country that put him there is a striking starting point for “The Good Lord Bird,” a limited series based on James McBride’s 2013 novel that reminds audiences what a bonafide patriot looks like, sounds like, and, most importantly, acts like. And it’s not even John Brown’s story. Not really.

Following the prelude to a hanging, Showtime and Blumhouse TV’s “The Good Lord Bird” flashes back a few years to when a young Henry (Joshua Caleb Johnson) first crossed paths with the famous abolitionist. An enslaved shoeshiner in Kansas, Henry witnesses first-hand the kind of calamitous conversation John Brown relies on to spark change. It goes something like this: 1) A slaveholder disrespects his slave, 2) he’s called out for mistreatment by a Bible-thumping stranger, 3) the slaveholder stands behind his pro-slavery position (who are typically called “slavers” in the show), and 4) John unleashes his righteous hand of God to set the lost soul straight.

Yes, John is looking for a fight — he’s actively trying to start a civil war —  but the series (executive produced by Hawke, who also co-wrote the pilot with Mark Richard) doesn’t depict the crusader as an unstoppable force. The only reason John escapes with Henry is because the slaver he was trying to convert (or kill) caught backfire from his own pistol. Rather than inflate or canonize John Brown, “The Good Lord Bird” embraces his humanity (even when it leans more toward explosive entertainment than strict historiography). 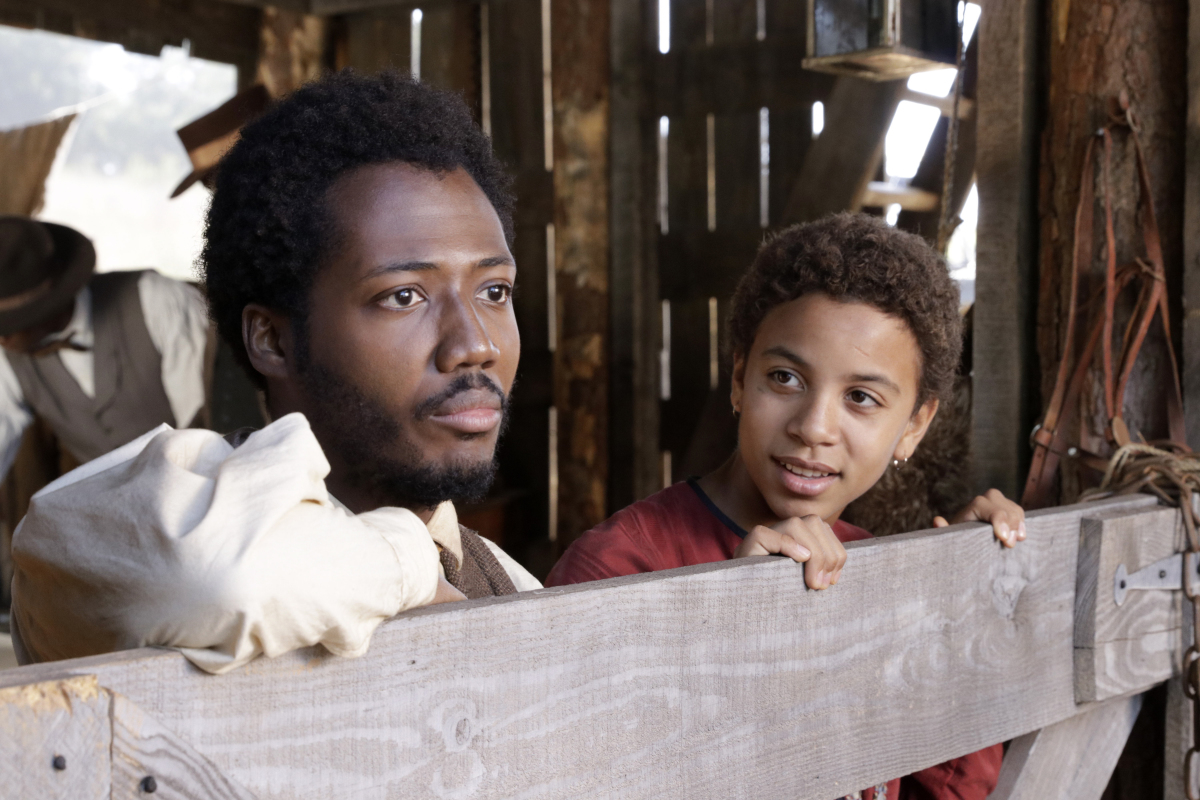 And what entertainment it is. With a rollicking pilot from director Albert Hughes (“Menace II Society,” “From Hell”), the limited series is bursting with lively music, well-staged shootouts, and a wicked sense of humor. Holding it all together is Hawke. Introduced getting a straight shave via an old school (and highly effective) star turn, Hawke is at one with the character as his steadily growing beard is one with the forest around him. Many will reference the voice Hawke has conjured — which sounds like Nick Nolte preaching through a lung-full of cigar smoke — but it’s his eyes that hold the key to John’s indelible nature. Blue like ice but sharp as glass, Hawke squints, expands, and softens his peerless peepers with startling precision. That he can go as big as he does with John and still bring him back to down to Earth for heartbreaking moments of surrender and solace, well, the eyes have it — and they help make “The Good Lord Bird” a worthy religious-themed successor to “First Reformed.”

All that being said, this story is told from Henry’s perspective, thus avoiding the white savior critique typical to figures like John, while undercutting his heroic image with gleeful bits of humor. (Running gags about John’s endless pre-meal blessings and near-constant manipulation of Bible verses give the efficient episodes added buoyancy.) Henry’s narration isn’t always necessary, but his point of view is vital. Time and time again, “The Good Lord Bird” calls out its white characters for overlooking Black Americans in their eagerness to speak for them. Speeches about ending slavery are given to huge, wholly white audiences. Decisions about what’s best for a Black family are made by a troop of white men. And most telling (and hilarious) of all, John is convinced the most recent addition to his traveling family is a girl, rather than the obvious boy every Black character can see right away.

Henry isn’t even called Henry for most of the show; he’s Onion, named after a good luck charm given to him by John, which Henry promptly eats, thinking that’s what his new master wants, and thus becomes John’s new, living, breathing good luck charm. All of these passively racist presumptions are identified either through narration or savvy, subtle filmmaking choices, as “The Good Lord Bird” soon becomes less about John’s quest — after all, if you’re no history buff, viewers are told how it ends from the opening scene — and more about Henry’s understanding of himself as a man, a person, and a Black American. 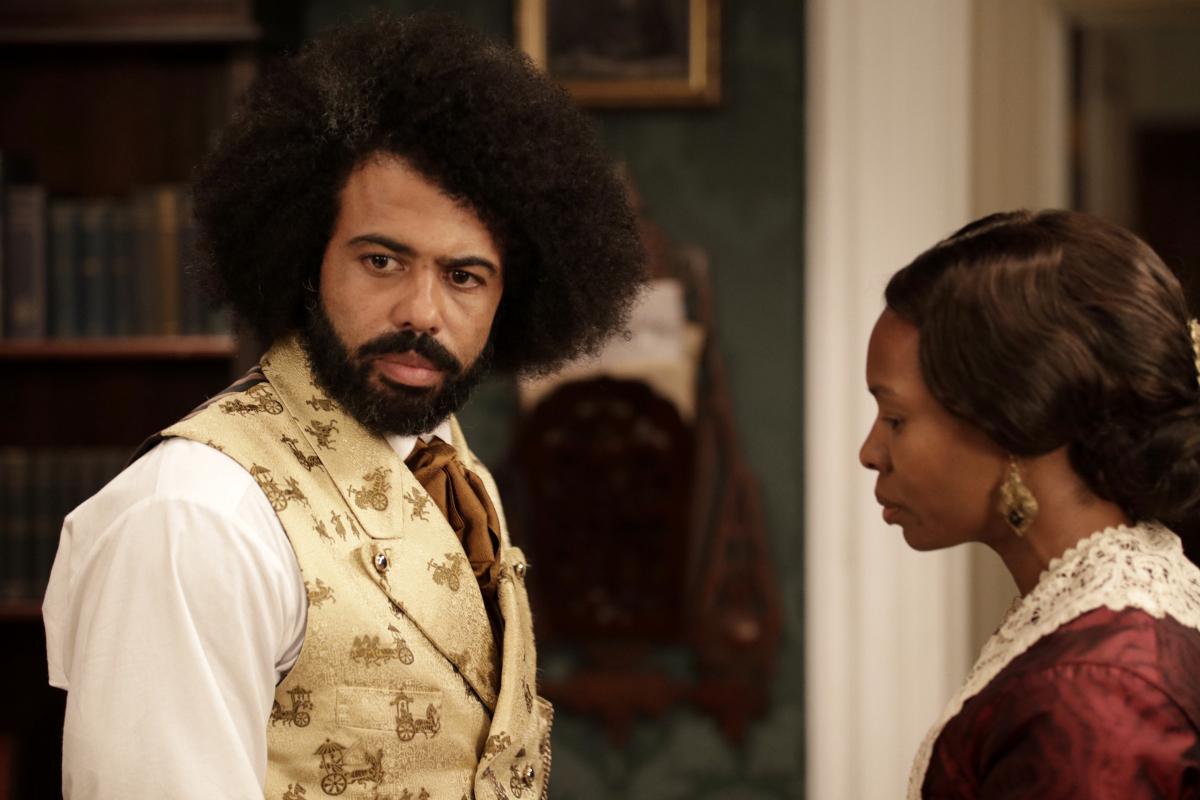 That Episode 2, “A Wicked Plot,” is almost entirely without John Brown and doesn’t suffer for it speaks to how well the series balances tone and character, while the arrival of Daveed Diggs’ Frederick Douglass emphasizes Henry’s point of view over his inherited father figures’. Whereas John is an untamable mountain man who doesn’t care if he sleeps in a ditch or under a duvet, Mr. Douglass (as he demands Henry call him) is a civilized abolitionist who aims to make change around the dinner table through reasonable discussion. He’s also a horndog, and his ear is bent for and against John’s rebellious aims by dueling Black and white wives. Diggs turns Douglass into a hoot, without abandoning the respect he commands from his peers and viewers, but Henry has to find his own way forward. Seeing two extremes and feeling stuck somewhere in the middle, it’s not until Henry runs into many former and current slaves that he starts to understand the fight he’s been swept up into.

The same can be said for the audience. For as commanding as John Brown is under Hawke’s ferocious turn, his growling, raspy, and megaphoned voice never overwhelms the men and women he’s hellbent on setting free. They speak for themselves, and their stories are the lifeblood of “The Good Lord Bird,” even if Brown’s actions are its engine. When the time comes for his hanging, and “What a beautiful country” croaks out from his tired throat, don’t let his crazed eyes fool you. John Brown is not confused. He sees a future worth fighting for; it came true once, but the fight continues.