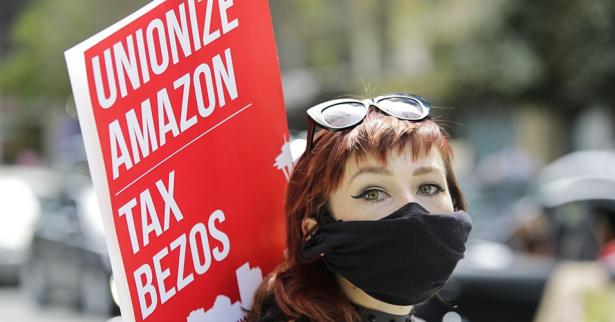 Amazon has long opposed the idea of its warehouse employees forming a union, though much of its anti-union strategies have stayed under wraps. But a confidential Amazon internal memo viewed by Recode reveals how the company is making significant investments in technology to track and counter the threat of unionization.

The 11-page document, dated February 2020, describes Amazon’s plans to spend hundreds of thousands of dollars to better analyze and visualize data on unions around the globe, alongside other non-union “threats” to the company related to factors like crime and weather. Out of 40 or so data points listed in the memo, around half of them were union-related or related to employee issues, like mandatory overtime and safety incidents. The memo requested staffing and funds to purchase software that would specifically help consolidate and visually map data from three different Amazon groups, led by employee relations (which is part of human resources), along with Amazon’s Global Intelligence Unit and Global Intelligence Program.

The new technology system — called the geoSPatial Operating Console, or SPOC — would help the company analyze and visualize at least around 40 different data sets, the memo says. Among them are many related to unions, including “Whole Foods Market Activism/Unionization Efforts,” “union grant money flow patterns,” “and “Presence of Local Union Chapters and Alt Labor Groups.” Additionally, one of the potential use cases for the tool is described in the memo as “The Union Relationship Map,” though no other details are provided.

The memo offers evidence of how Amazon is dedicating significant time and resources to reduce the likelihood of unionization among its front-line workforce, which totaled nearly 1.4 million people across Amazon and Whole Foods from March through September 19, counting every employee who worked for the companies for any period of time. This is not a complete surprise: Amazon is now the second-largest private-sector employer in the US, only behind Walmart, and scrutiny of its labor practices has increased as it has rapidly expanded its warehousing network, even during the Covid-19 pandemic.

“In my opinion, it’s definitely part-strategy of union avoidance,” said a former Amazon senior HR manager familiar with past company union-avoidance tactics, and with whom Recode shared the memo. The former manager requested anonymity for fear of retribution. “The tool could be used for things like factoring in the financial strength of the closest unions [and] success rate of local unions (how many campaigns have resulted in [collective bargaining agreements]).” The former HR manager added that, as the internal memo shows, the tool could also be useful for mitigating non-union-related risks to employees, like rerouting customer orders during severe storms so warehouse workers can stay home until dangerous weather passes.

Amazon spokesperson Jaci Anderson said in a statement that Amazon respects “employees’ right to join, form or not to join a labor union or other lawful organization of their own selection, without fear of retaliation, intimidation or harassment. Across Amazon, including in our fulfillment centers, we place enormous value on having daily conversations with each associate and work [to] make sure direct engagement with our employees is a strong part of our work culture.”

While some Amazon warehouse employees belong to unions in European countries like Germany and Italy, no union has ever had success organizing any of Amazon’s workforce in the United States. Amazon closed down a call center in 2001 that was the focus of a unionization attempt, and a small group of warehouse technicians in Delaware staged a union vote in 2014, but a majority of the employees voted against.

More recently, Amazon has faced increased scrutiny from labor activist groups, progressive politicians, and a handful of outspoken employee organizers over the company’s treatment of its massive warehouse workforce. Earlier in the pandemic, some warehouses employees argued that Amazon’s safety measures came too late or were inconsistently enforced. Amazon fired several of them, citing violations of company policies. The employees all believe they were fired for speaking out. Amazon on Thursday said that nearly 20,000 of its Amazon and Whole Foods employees have contracted Covid-19, which represents 1.44 percent of its front-line employees. Nationwide, more than 2 percent of Americans have tested positive for the virus. But Amazon’s calculation included employees who worked for the company “at any point” between the beginning of March and September 19, potentially inflating the denominator in that equation because it includes workers who may have only been employed for short stretches.

Either way, Amazon is not alone among large retailers in its opposition to unions. Walmart is perhaps the most infamous for its anti-union tactics. The brick-and-mortar titan has been known to show anti-union videos to new hires and supply store managers with “Labor Relations Training.” But Amazon’s technical expertise and data-focused DNA potentially positions it to develop a more sophisticated tracking and union avoidance system than its peers. And the SPOC memo sheds more light on that sophistication.

“I think it’s Amazon acting like most employers in that they have a very strong preference for remaining non-union and will put significant resources at any attempt to cut off organizing before it can get off the ground,” Rebecca Givan, a labor professor at Rutgers University, told Recode. “The difference is that Amazon is a company that uses data collection, surveillance, analytics in everything it does, from workflow in its warehouses to consumer preferences to product placement on its website. So they’re extremely well-positioned to apply that expertise.”

Amazon’s public case against unionization has included some typical anti-union employer talking points, like wanting a direct line of communication between management and employees. But former executives, one of whom previously called unionization “likely the single biggest threat to the business model,” have told Recode that the company is also concerned that its warehouse operations would become less efficient if employees unionized. Translation: If its workers were to successfully unionize, it’s unlikely the company could continue pushing front-line staff as hard on performance goals, which can involve stowing or grabbing several hundred items per hour. An Amazon spokesperson hinted at this when Amazon defeated the last union drive in one of its US warehouses in 2014. “Amazon’s culture and business model are based on rapid innovation, flexibility and open lines of direct communication between managers and associates,” the statement at the time read in part.

Simply compiling the union-related datasets mentioned in the memo is unlikely to be illegal, said Wilma Liebman, a former chairman of the National Labor Relations Board under President Barack Obama.

“But once employees become aware of such surveillance of union and other ‘concerted’ activities, there are potential legal issues presented,” she wrote in an email to Recode. “Open surveillance is illegally coercive even if managers do not directly threaten to retaliate or take action based on the information obtained. There is an implied message that the company people will be rewarded and the union adherents will suffer.”

The SPOC document made waves among Amazon corporate staff last week after some employees came across the memo and distributed it within the company.

These employees first found the memo while they were investigating why an unfamiliar email address linked to the employee relations team subscribes to dozens of employee mailing lists related to worker issues and diversity groups.

Employees then discovered that the unfamiliar email was linked to the larger SPOC project and feared it was part of an HR surveillance program to quietly monitor employee conversations that could lead to labor organizing.

Anderson, the Amazon spokesperson, previously told Recode that the SPOC program monitors all types of external activity that impacts the safety and well-being of its employees, from weather events to power outages, and is not intended to favor or target one type of external threat — such as unionization — over another.

But several Amazon employees who viewed the memo, and who are involved in employee activism, believe the document shows evidence of an anti-union surveillance program. The SPOC memo discovery also comes just a month after a report drew attention to two Amazon job listings posted in August seeking “intelligence analysts” to research “labor organizing threats against the company.” The tech giant deleted the postings amid fierce criticism from labor activists and the media attention that followed.

“I (correctly) thought I knew that Amazon had sophisticated intelligence operations surveilling their workers, but to see it written out so blatantly — it hits a little different; makes it a little more real,” one employee, who was granted anonymity because they were talking in violation of Amazon’s external communications policy, told Recode.

Givan, the Rutgers labor professor, said that if there’s one takeaway for employees from the memo, it’s that you are being watched.

“From an organizing perspective, the employees should assume everything they are talking about is being monitored,” she said, “and everything that they’re writing is feeding the algorithm.”