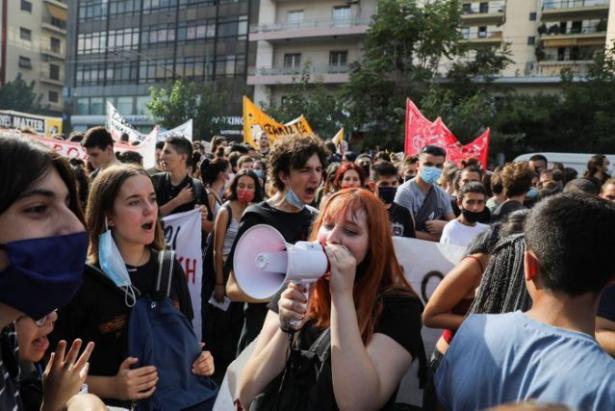 A court verdict in Athens with ramifications for the far right across Europe has been met with jubilation in Greece and internationally after judges ruled the neo-fascist Golden Dawn was a criminal organisation in disguise.

Tens of thousands people who had converged near the heavily guarded court complex in Athens in anticipation of the judgment roared in excitement as the news emerged. Many broke into spontaneous applause and punched the air as it became clear that the three-member tribunal had found the far-right group guilty of operating a gang of hit squads bent on eliminating perceived enemies.

“It’s official. Golden Dawn is over. The conviction is overwhelming,” said Petros Constantinou, a leading anti-racism activist. “The mood here today is resonant of the celebrations we saw with the liberation of Athens from the Nazis. It’s a great day.”

Wrapping up a trial that began in April 2015, the presiding judge, Maria Lepenioti, said the court had concluded that seven of Golden Dawn’s 18 former MPs, including the party founder, Nikolaos Michaloliakos, had led the deadly organisation. The rest were found culpable of participating in the gang.

The verdict was met with widespread relief. Magda Fyssa, whose son Pavlos Fyssas, an anti-fascist rapper, was stabbed to death by a senior party operative, and who attended almost every court session over the past five and half years, screamed with emotion. “Pavlos did it! My son,” she wailed outside the courtroom.

The Greek president, Katerina Sakellaropoulou, said the judgment was an important day for democracy and evidence that Greek institutions were able to “fend off any attempt to undermine them.”

Before the verdict, the public prosecutor overseeing the case recommended the acquittal of many key party members in relation to the criminal organisation charge, citing lack of evidence – a recommendation that was roundly denounced by critics, who accused the magistrate of typifying the toxic influence wielded by conservatives over the justice system.

The hearing was the biggest trial of fascists since the prosecution of the Nazis at Nuremberg after the second world war.

Two thousand police officers, many brought in as backup from the countryside amid fears of violent clashes between the protesters and far-right supporters, surrounded the area near the court as helicopters and drones flew overhead. Clashes did break out as rocks and molotov cocktails were hurled at police, who responded with teargas and water cannon. The violence was attributed to a minority of anti-establishment forces.

The leftist former prime minister Alexis Tsipras, who was in the crowd, said that after years of sowing hate, poisoning Greek society and orchestrating murderous attacks, Golden Dawn fanatics would finally face justice. 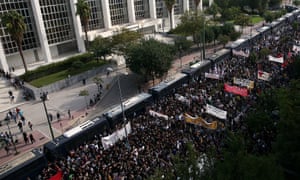 “They are not innocent. We all know that,” he wrote on social media before the three-member tribunal’s decision. “On Wednesday we ought to be there to shout it loud and clear. We owe it to the history of this country, we owe it to democracy, we owe it to our children.”

Those charged with directing the criminal organisation face sentences of up to 15 years in prison. If found guilty of additional crimes, the sentences handed down by the criminal court are likely to be longer, although justice officials said it may take several days of legal proceedings before they are formally announced.

The accused vigorously denied the charges, claiming they were victims of political persecution. Michaloliakos, 62, a Holocaust denier and ardent admirer of Hitler whose neofascist beliefs began to take form during Greece’s 1967-74 military dictatorship, has described Golden Dawn as a patriotic party of ultra-nationalists. Diehards lower down the chain who have been linked to violent attacks have been disavowed by the leader.

Judges sitting in the court of appeals focused on specific cases including whether the group was culpable of the attempted murder of Abouzid Embarak and three other Egyptian fishermen in June 2012. 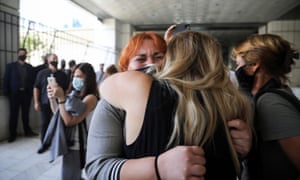 Golden Dawn members have already been found guilty of the killing of a Pakistani fruit worker, Ssazad Lukman, in Athens in January 2013.

The court examined evidence that ranged from the testimonies of victims and five former Golden Dawn members now in witness protection programmes to incriminating videos snatched from the homes of party leaders, and heard that the attacks increased in frequency after the party’s entry into the Greek parliament in 2012.

In the last general election, in July last year, the neo-Nazis narrowly failed to win enough votes to win any seats in parliament, and the party has all but collapsed amid infighting and defections since then.

“The accusations against the leaders and members of Golden Dawn, including the murder of Pavlos Fyssas, expose a fissure that exists not just within Greece but across Europe and beyond,” said Nils Muižnieks, the Europe director of Amnesty. “The impact of this verdict, in what is an emblematic trial of an extreme far-right party with an aggressive anti-migrant and anti-human rights stance, will be felt far beyond Greece’s borders.”

The central Board of Jewish Communities in Greece (Kise) said the “historic verdict ... delegitimises the neo-Nazi organisations and at the same time fortifies democracy in the country”.

But it said this was no time “to let our guard down”. A Jewish cemetery in Athens was vandalised in an attack attributed to the extremists on Monday and its walls daubed with slogans used by the Third Reich.

Greece suffered appallingly under Nazi occupation, with almost all of its Jewish community sent to the gas chambers.

Helena Smith is the Guardian's correspondent in Greece, Turkey and Cyprus.