#CountOnUs: Youth Organizers Have a Plan to Mobilize If Trump Tries to Steal the Election

"Together, we're going to vote and organize like our communities and planet are at stake, because they are." 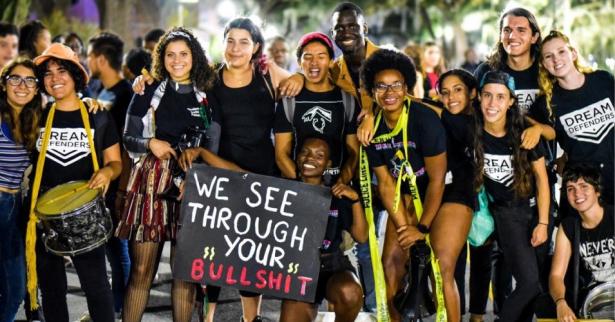 Leaders of Dream Defenders, March for Our Lives, Sunrise Movement, and United We Dream PAC announced Thursday that their youth-led advocacy groups have come together with a new mobilization effort to defeat President Donald Trump in November, "protect the ballot box from corruption, and lead a massive youth strike if Trump tries to steal the election."

"What we're building together will be crucial towards plugging young people into action who are feeling anxious about the state of our democracy, society, and planet."

Launched in the midst of early voting and just hours before Trump tested positive for Covid-19, the new collaborative effort called "Count On Us" comes as a response to growing concerns about the president's potential reelection and any unlawful attempt to hold onto power.

"We have reached our most defining moment in electoral politics where our collective ability to push forward the flagship agendas of our generation will be determined not just by how we vote going into November, but how we mobilize the morning after Election Day," said Sunrise deputy creative director Zina Precht-Rodriguez.

"This joint organizing platform will be the universal youth organizing tool of the foreseeable future through the election," Precht-Rodriguez added. "What we're building together will be crucial towards plugging young people into action who are feeling anxious about the state of our democracy, society, and planet." 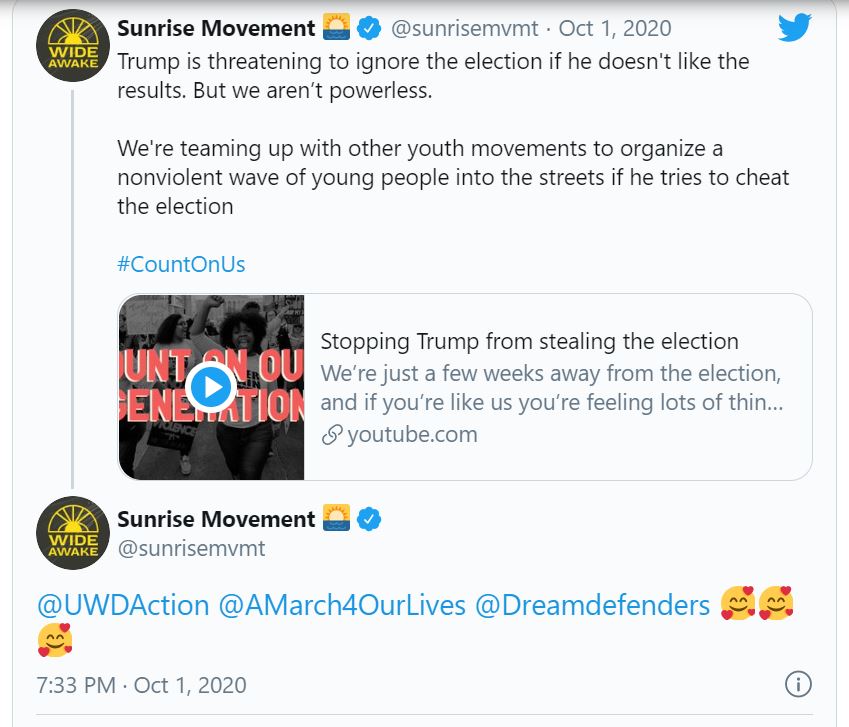 The launch came on the heels of Trump's first debate with Democratic presidential nominee Joe Biden—during which the president continued to baselessly attack the security of mail-in ballots, which are expected to be widely used this year because of the pandemic that has now reached the Oval Office.

In the months leading up to Election Day, Trump has spread lies about voter fraud, refused to commit to a peaceful transition of power if he loses, and—along with other Republicans and right-wing groups—tried to make it harder for Americans to cast ballots in this cycle during a public health crisis.

When we see things that need to change, we make it happen and we count on each other to stand up for what's right."

Such rhetoric and actions from the president and others have led progressive organizers to urge voters to cast ballots early—and in person, if possible—and to form response plans in case Trump refuses to leave office. Over 100 advocacy groups have joined the Protect the Results coalition.

The organizations behind the new youth-led platform have previously garnered international attention for their efforts to advance racial, climate, and immigrant justice and take on gun violence. They plan to hold their first joint mass call on Monday, October 5 at 8:00 pm ET.

"Our generation is at the forefront of the fight for democracy," declared Marie Rattigan, a lead organizer with Dream Defenders. "When we see injustice, we fight it. When we see things that need to change, we make it happen and we count on each other to stand up for what's right."

"So I'm excited to link arms with these other powerful organizations of young people ahead of the election, because this one will determine so much about our future," she added. "Together, we're going to vote and organize like our communities and planet are at stake, because they are."

The youth organizers' Count On Us website lays out their "Organize. Vote. Strike." plan for the ongoing election, explaining:

This fall, our generation has the power to defeat Trump and begin to transform this country forever.

We are the Dreamers who won protections for immigrants. We are the kids who took on the NRA. Our generation made Black Lives Matter a national rallying cry and the Green New Deal a political priority. Donald Trump and his billionaire friends know they're losing, so they are deliberately trying to tear us apart and convince us our voices don't matter, distracting us as they try to steal the election. We are coming together to stop them.

"For me and many others at March for Our Lives, our advocacy to end gun violence is not separate from how we navigate the world and the lived experience we bring to this work," said Daud Mumin, a student board member of the group that grew out of the youth organizing that immediately followed the 2018 mass shooting in Parkland, Florida.

"The future that we want and deserve is on the line this election and that's why young people are coming together in partnership."

"We're Black, we're Brown, we're immigrants and first-generation Americans—and all of these issues are deeply interconnected for us," Daud continued. "This election cycle, we're facing extreme indifference from the political establishment to the issues that impact young people the most. We are coming together to fight for our future, because we can't count on anyone else to do that for us."

Gabriel Madison, a United We Dream Action PAC member and first-time voter, echoed that message, saying that "the future that we want and deserve is on the line this election and that's why young people are coming together in partnership."

"Trump and his Republicans enablers have attacked everything that we care about, including deporting members of my undocumented immigrant community," Madison said. "I will be voting for the first time this election because my community is counting on me, and I know that the only way for all of us to thrive is if young people count on each other to vote Trump out and protect our democracy."