Farmers Are Plagued by Debt and Climate Crisis. Trump Has Made Things Worse.

U.S. farmers say a crisis of farm profitability and increase in food scarcity may be looming, short of major changes in the industrial agriculture system. 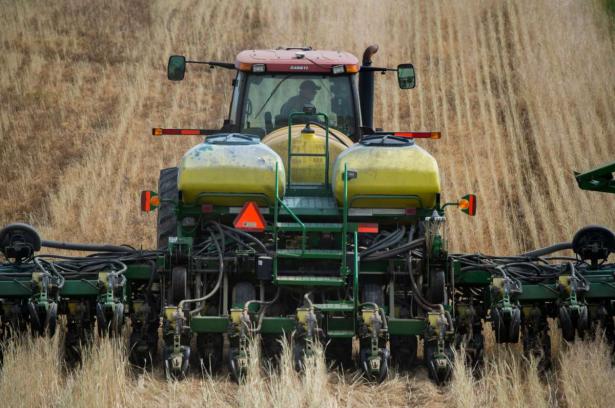 A farmer plants corn in Mount Airy, Maryland, on May 19, 2020.,ANDREW CABALLERO-REYNOLDS/AFP via Getty Images
This story is part of Covering Climate Now, a global journalism collaboration strengthening coverage of the climate story.

At a campaign rally at an airport in Wisconsin on September 17, President Trump announced a second round of COVID-related relief payments for farmers under the Coronavirus Food Assistance Program (CFAP 2). For the first time, producers of commodities, including wine grapes, goats and hemp, have become eligible for payments, which are expected to total $13 billion.

But many farmers say stopgap payments like this are a far cry from what they need to navigate intersecting crises, including the corporate consolidation of farms and the climate crisis, which have shaken the foundations of the brittle farm economy. Only farmers who derive 75 percent of their total income from farming are eligible for CFAP 2 assistance. Yet most farmers rely on off-farm jobs to supplement on-farm income, according to the family farm advocacy network Farm Aid. In 2018, median on-farm net income was actually negative: -$1,735.

Though it has not become a major election issue, U.S. farmers say a crisis of farm profitability and increase in food scarcity may be looming, short of major changes in the industrial agriculture system.

In 2009, when milk prices fell to a six-year low, then-dairy farmer Rob Bass made the difficult decision to sell all 1,000 of his cows. Bass and his family had run out of credit, and he was losing money producing milk. Their farm, in northeast Connecticut, had been in the Bass family since 1710.

Bass decided to transition the farm to growing corn and hay, which he calculated might deliver a more stable income. He did well the first few years as corn prices climbed, reaching an all-time high of $8.02 a bushel in August of 2012. But prices have been on the decline since the fall of 2012, due to corn stockpiling. A deadly disease impacting young pigs and drought in the Great Plains affecting beef cattle led to lower demand for corn feed. Bass has struggled to make ends meet. As his sister, Jenni Bass tells Truthout, while the family farm used to have a lengthy payroll, they no longer employ anyone, nor are they able to pay themselves. All income goes toward the family farm mortgage and paying property taxes. “Our margins are so small, so narrow,” Bass said.

According to a 2012 article in Nature, climate change is a major driver of corn price variability. Summer 2020 was the hottest on record in Connecticut, where the Bass family farm is located. Worldwide, the last six years have been the hottest ever recorded.

Farmers like Bass recognize that agriculture is a major contributor to greenhouse gas emissions, on account of widespread practices that deplete the soil of nutrients, causing it to leak greenhouse gases like nitrous oxide and produce runoff that spurs algal blooms. Agriculture comprises 10 percent of U.S. emissions, according to government reports.

U.S. farmers say a crisis of farm profitability and increase in food scarcity may be looming, short of major changes in the industrial agriculture system.

But Bass says he’s stuck in the current system, planting genetically modified seeds, and spraying the matching herbicide. It’s expensive and makes for a less biodiverse farm, but it also requires less labor to keep weeds at bay.

“We’d love to go organic, but it would take three years to get certified,” he says, and it’s unclear what would pay the bills in the meantime.

Trapped in a Cycle of Personal and Ecological Risks

Farmer Mary Agnes Rawlings and her husband have been trying to break out of the industrial agriculture “trap” since returning to her husband’s family farm around two decades ago. One hundred ten acres of the 154-acre central Illinois farm are now organic row crops, with the help, in part, of USDA grants. On August 10, 2020, the Trump administration announced it would be reducing the amount the government reimburses farmers as part of the program to 50 percent, or $500 per project, due to “limited funding.”

“It hurts,” Rawlings said, “when farmers are already struggling with $3 dollars a bushel corn,” she says, noting that at those prices, farmers are losing fifty cents per bushel of corn they produce.

The alternative to organic, Rawlings points out, is using GMO seeds, but foods grown with them have been linked to a decline in kidney and liver function in animal studies. Putting themselves at risk takes a psychological toll, she says. Rawlings suspects her father, who worked on the family farm until he died of colon cancer, may have gotten sick because of chemicals the USDA continues to allow, like glyphosate, the synthetic herbicide under trademark by Monsanto. In spite of studies providing evidence that associates glyphosate with increased cancer risk, in January 2020, the Environmental Protection Agency announced there were “no risks of concern to human health” related to the chemical.

“There’s so many issues I don’t even know where to turn,” Rawlings told Truthout. But amid all her concerns, climate tops her list of agricultural issues, she says.

Lawmakers on both sides of the aisle continue to take donations from powerful corporations that form the backbone of the industrial agriculture system, like Bayer and Monsanto, thereby incentivizing their support of the broken agriculture system. Meanwhile farmers are trapped in a cycle of responding to the effects of climate change with solutions that further contribute to greenhouse gas emissions, rather than transitioning to diversified farming operations that could produce more high quality food and mitigate emissions fueling the climate crisis.

Losing the Ability to Feed Ourselves

In the United States, as with many parts of the world, food deserts are increasingly common. But at the global level, The New York Times has reported, 100 million more people will be at acute risk of experiencing hunger above 2 degrees Celsius of global warming, due to crop loss caused by extreme weather and a shortage of pollinators, for instance.

“You’re sort of reaching a breaking point with land itself and its ability to grow food and sustain us,” senior policy adviser on climate change at Oxfam America, Aditi Sen, told The New York Times.

While the United States has historically positioned itself to provide aid to other countries, policy experts with the Center for Strategic and International Studies suggest the U.S. must urgently look inward to address its own climate-related food security issues.

Twelve percent of the U.S. experiences food insecurity, in comparison with 6.9 percent of the population across Asia and 9.8 percent across Latin America. A 2019 brief points out that while regenerative agricultural practices like cover cropping are on the upswing, that’s only the case on a small percentage of land. The brief notes that universities might devote more resources toward climate solutions in agriculture. But academics aiming to do just that have struggled to circulate their work amid the Trump administration.

A 2019 investigation by Politico revealed that the USDA refused to publicize at least 45 government-sponsored studies detailing how U.S. agricultural operations have been and will continue to be impacted by climate change. One explains how cattle farmers in the Southern Plains might be impacted by waning water levels in the Ogallala Aquifer. Another study outlines practices that could help farmers in the Southern Mississippi Delta become more climate resilient.

As small agricultural operations throughout the U.S. attempt to adapt to more variable weather patterns, farmers like Michigan organic orchardist Tom Rosenfeld regularly consider calling it quits. Rosenfeld has lost full crops of apples to pests that are new to the area on account of the changing climate. Like many farmers, Rosenfeld supplements his farm income with other jobs. “I would have expected that by now I would have unlocked the key to a sustainable income,” he says, reflecting on when he purchased his orchard fifteen years ago.

Between 2011 and 2018, the number of farms in the U.S. has declined by almost 5 percent as farmers face similar challenges, while the average farm size has increased. With conditions for farmers as they are, Rosenfeld worries there might soon be a shortage of farmers who produce “specialty crops,” — the term the USDA has developed to refer to fruits, vegetables and other crops intended for human consumption rather than animal feed or biofuel. Amid the current agricultural system, only 2 percent of U.S. farmland is used to grow food, while 59 percent of land is used to grow commodity crops like corn and soybeans.

Jenni Bass, the Connecticut farmer, never thought she and her brother would still have a mortgage on their family farm 300 years after its founding. But expenses keep mounting. A few years ago, the Bass family decided to transition 20 of its 1,100 acres to non-GMO wheat. But a deal fell through with a local baker. Now they have to figure out how to clean it themselves. She estimates the machine they need would cost $35,000.

“People don’t really understand a farmer’s reality, the kind of bills that it takes to run a farm,” Bass says, noting that she is hopeful about the Farm System Reform Act of 2020. The proposed legislation, which is currently before both houses of Congress, would incentivize climate-minded agricultural practices and prevent the further consolidation of agribusiness.

At 63, a pre-existing health condition puts Rob Bass at severe risk if he contracts COVID-19. But given his farm income, which doesn’t stretch much further than covering property taxes and the ongoing family farm mortgage, Bass has decided to return to his side job of driving a school van in the mornings and afternoons, because he’ll get health insurance.

With only weeks to go until the election, Jenni Bass says she hopes voters see through what she describes as Trump’s empty attempts to appeal to farmers by invoking the U.S. farm imaginary, while simultaneously proposing billions of dollars in cuts to rural housing and utility programs.

As Successful Farming reports, the “Trump bump” in farm income from programs like CFAP is set to drop precipitously, by 17 percent in 2021. “I just wish politicians actually thought about farm policy in a real way,” Bass says. “In a loving way, not just a bureaucratic way.”

The reality is, less than 1 percent of readers ever donate to Truthout and recently even fewer people are giving. We urgently need your help to publish journalism that doesn’t shy away from the challenges we’re facing, from racism and police violence to attacks on democracy and the fight for the White House.

Please make a small one-time or monthly donation so we can amplify the voices of hundreds of journalists, activists and changemakers working tirelessly to turn things around. Donate Now