The Right vs Left/Center showdown brings a court victory over fascism in Greece, exploding teens, and a mess of menaces. 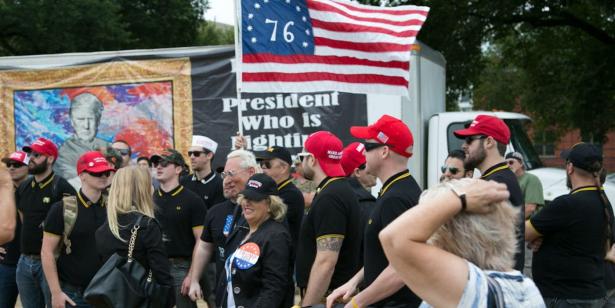 Roger Stone arrives with Proud Boys during the Mother of All Rallies at the National Mall in Washington, D.C. on September 8, 2018, credit: Emily Molli/NurPhoto via Getty Images

By Ed Pilkington
The Guardian

With the US dangerously divided, experts fear the president’s remarks will inspire armed factions to show up at polling places.

These far-right extremist groups could pose a national security threat in the run up to the election.

Wednesday’s landmark verdict marked the end of Golden Dawn, but ideologies do not die with political organisations that represent them.

By Stephanie Kirchgaessner
The Observer

An ex-member of Amy Coney Barrett’s faith group speaks out.

The Wall is a Money Maker

Contractors and scrap dealers are selling border fence steel in Arizona and Mexico.

How Wisconsin Rurals Read the Race

“Rural resentment” may not get much attention, but it’s a real and powerful force in US politics.

De-escalation is the new customer service: training to deal with angry, maskless patrons.

Who would have thought that a story about exploding teenagers would be the most appropriate movie for 2020? The new satirical comedy Spontaneous couldn’t be more perfect for where we’re collectively at.

Toxic rhetoric, driven by the current government, has only served to deepen the eternal divisions between religious conservative and socially liberal Poles.