books Ballad of an American

This book on Paul Robeson is the first-ever to be presented as a graphic biography. 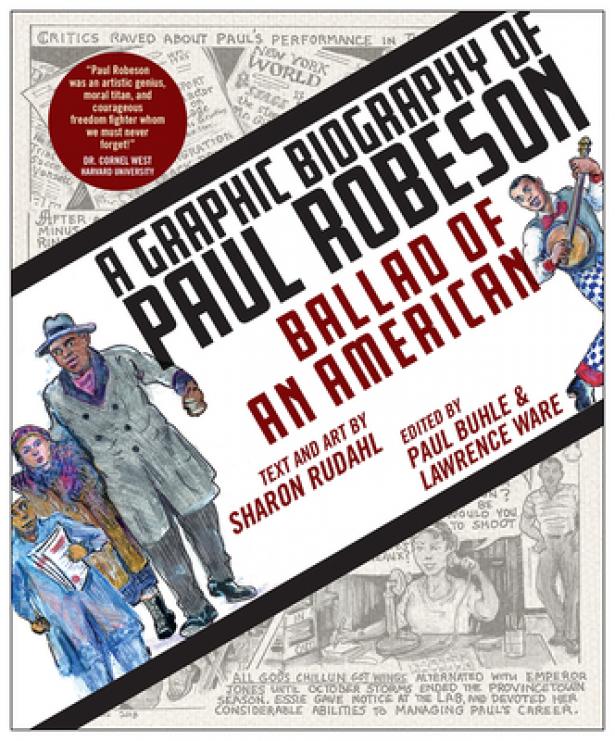 A new graphic biography of artist and activist Paul Robeson carries an inspiring message at a time in which our country is living amidst the most far-reaching civil rights movement in its modern-day political history.

Ballad of An American looks back at Robeson’s fight against fascism in the 1930s and 1940s and his later support for civil rights struggle in the United States. It is especially relevant today, as the country’s democracy is threatened by the possible re-election of President Donald Trump who counts on the support of millions of voters with white supremacist values and authoritarian political leanings.

With beautiful illustrations and a conversational tone, this biography paints an intimate portrait of Robeson, the son of a slave, who became a leading voice in the black liberation struggle in the United States and the fight against colonial rule around the world.

As world-class actor and singer, Robeson enjoyed the widespread admiration of millions. It was a level of fame that often gives artists the moral stature to be influential social critics.

“I speak as an American Negro whose life is dedicated, first and foremost, to winning full freedom for my people in America,” said Robeson, as quoted in the book. “The artist must take sides. He must elect to fight for freedom or slavery. I have made my choice.”

The art and text of Ballad of An American is by Sharon Rudhahl (best-known for the graphic biography Emma Goldman: A Dangerous Woman), who started her career as a cartoonist with anti-Vietnam War underground newspapers. In the 1970s, Rudhahl was part of a group of feminists who founded Wimmen’s Comix.

The book is edited by Paul Buhle, a retired senior lecturer at Brown University, and Lawrence Ware, a professor of philosophy and co-director of the Center for African Studies at Oklahoma State University.

Buhle is also the authorized biographer of pan-Africanist C.L.R. James and editor and author of numerous books on the left in the United States, and he worked on several non-fiction graphic books, including ones on Goldman (with Rudahl), Abraham Lincoln, Franklin D. Roosevelt and Eugene v, Debs. Ware writes about race and culture for The Root and The New York Times. He has been a commentator on race and politics for National Public Radio and Public Radio International.

The book’s first chapter, “Son of a Slave--Star of Rutgers,” recounts Robeson’s childhood and college years. His father, William Robeson, founder of Thomas AME Zion Church in Somerville, N.J., had escaped slavery via the underground railroad from North Carolina. The pastor set high expectations for Paul, who excelled in high school as a student, athlete and actor. He won a full scholarship to Rutgers University after finding out about a statewide exam that his racist principal failed to inform him about.

Robeson encountered racism from teammates on his college football team. But he counted with the support of his coach, who on one occasion refused to cave in to pressure from a West Virginia team that insisted Robeson be dropped from the roster.

His experience as an award-winning debater helped him develop the electrifying speaking skills he would later use as a political activist. One of the top four students selected as a member of Phi Beta Cappa,  Robeson, whose senior thesis was on the unfulfilled promise of the 14th amendment that extended citizenship to former slaves and guaranteed equal protection to all citizens, was elected valedictorian of the class of 1919.

“First Steps on the Stage,” the second chapter, recounts how Robeson moved to Harlem to attend law school at Columbia University. There, he married lab technician Essie Cardozo Goode, the first black staff member at New York Presbyterian Hospital. He gained acting experience in community theater groups and performed occasionally as a paid singer while studying. He eventually abandoned the idea of practicing law to pursue what he believed would be a more successful career in the arts.

The following chapter, “He Finds His Voice,” is devoted to Robeson’s stage career. This included his role as Brutus in the revival of Eugene O’Neill’s The Emperor Jones, solo concerts of spirituals, a portrayal of the African-American heavyweight boxer Jack Johnson, his performances as Joe the Riverman in Oscar Hammerstein and Jerome Kern’s Showboat and a revival of All God’s Chillun. During this period, he become more politicized as met students like Jomo Kenyatta and Kawame Nkrumah--who went on to become leaders of the African anti-colonial struggle--Afro-Trinidadian political theorist C.L.R. James. A visit to London, where he joined a demonstration of Welsh unionized miners, shaped his views on unions and the struggle of working people.

Chapter four, “A World to Win,” is the most politically hard-hitting part of the book. It continues to chart Robeson’s artistic career while also describing his involvement in the struggle against European fascism, support for the ideals of the Russian Revolution, fundraising for the Republic during the Spanish Civil War, and backing the anti-colonial movement.

During the New Deal, he was asked to sing the “Ballad for Americans,” written for a Works Progress Administration project, which became the anthem for the Popular Front of anti-fascist Americans and the name of a nationwide tour that culminated with the largest crowd ever at the Hollywood Bowl.

In the 1940s, Paul Robeson made history as the first black actor to portray Othello on Broadway. Rudahl writes that his performance “opened the door for the next generation of black actors, including Ossie Davis, Cicely Tyson, James Earl Jones and Sidney Poitier.” But while Robeson reached the apex of his stardom as World War II was winding down, he would face growing government surveillance and encounter mounting political opposition. Baseball player Jackie Robinson testified against him in the U.S.  Congress, a European trip during which he spoke at a Paris world peace conference and gave a concert in Moscow led to charges of anti-Americanism and communism, an angry and violent white mob backed by police forced the shutdown of a concert in the blue-collar town of Peekskill, N.Y., the U.S. State Department barred him from traveling to Europe for a concert tour, and he was called upon to testify before the House Un-American Activities Committee. His films and recordings were taken out of circulation in the United States.

Ballad of An American ends with a touching section about the sad late stage of Robeson’s life. Suffering from depression, he retreated from public life. Many younger Americans weren’t aware of his pioneering work as a black artist, much less political activism, because of his self-imposed isolation. During this period, Robeson attempted suicide. He was hospitalized and received shock therapy. Some speculated that he went through an emotional breakdown caused by trauma over his failure to publicly criticize the repressive Stalinist regime of the Soviet Union, the constant official surveillance and relentless  political attacks he faced in the United States, and lasting sadness over his mother’s death. His son speculated that the C.IA. slipped LSD to him, Rudahl said.

But Ballad of An American for the first time raises the possibility that Robeson suffered from brain damage caused by his participation in tackle football as a professional player, college student and a high schooler.

A 2017 study of the brains of 111 National Football League Players revealed that 100 were damaged, resulting in a debilitating condition now diagnosed as Chronic Traumatic Encephalopathy (CTE). Rudahl said she became convinced that Robeson suffered from CTE when she read an article about the illness in a scientific journal.

During the last decade of his life, Robeson lived with his sister Marian in Philadelphia. His son, Paul Robeson Jr., and singer, songwriter and activist Harry Belafonte arranged for a 75th birthday tribute to Robeson at Carnegie Hall in New York City.

Robeson was unable to attend, but he sent a message, saying, “…Though I have not been active for several years, I want you to know that I am still the same Paul, dedicated as ever to the world side cause of humanity for freedom, peace and brotherhood.”

He passed away two year later. A panel of the book shows how thousands gathered in the rain in New York City for his funeral service at the Mother AME Zion Church, where his brother had been pastor.

“Paul Robeson speaks to the concerns of Black Lives Matter today,” Buhle said in an interview. “Race is fundamental to our society and it never went away.”

Labor journalist Gregory N. Heires, a blogger (www.thenewcrossroads.com) and Labor Portside moderator, is the former president of the Metro NY Labor Communications Council. He is the editor of The Jobs for All Newsletter of the full-employment advocacy group National Jobs for All Network.