The story is told through the eyes of a young, educated teenage slave (Joshua Caleb Johnson) who dresses like a girl at Brown’s request (for his own protection, supposedly) and is given the nickname “Onion.” 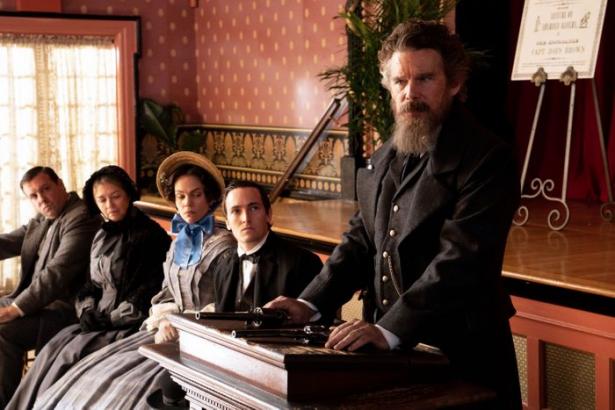 Ethan Hawke’s rage-filled croak as abolitionist John Brown in The Good Lord Bird is biblically awesome. It’s not just deeper and more gravelly than his everyday speaking voice: It’s a geyser of fury that seems to erupt from his innards like a demonic ectoplasm escaping the body of a possessed soul in a horror movie. When Brown launches into a sermon aimed at slavery-defending sinners, his hands grip the butts of his six-shooters, and his face and body knot up and twist like a hangman’s rope. His face grows red, then purple. His veins throb. Spittle flies. His eye color seems to darken. None of this is a special effect. It’s Hawke feeling Brown feeling the presence of the Holy Spirit, and sounding like old Nick Nolte trying to get through an angry monologue while being fed into a wood chipper.

Of course, Brown is also, to quote a supporting character, “nuttier than a squirrel turd.” That’s not a diagnosis, nor evidence of the character being wrong on the merits. It’s a personal observation that happens to be accurate. But, to its credit, the seven-part Showtime miniseries about Brown and his followers, which premieres Sunday night, never reduces the character to a medical binary. It treats the unhinging of Brown and his followers from white America’s norms as a break from moral abnormality, and leaves room for the possibility that if, as more than one account has suggested, John Brown simply woke up one morning hearing the voice of God exhorting him to free the slaves — even if it meant killing any man or woman who supported slavery — maybe it was because the the entire country had been mad for centuries, and terrorizing it was the only way to bring it to its senses. Brown led a makeshift army into a guerilla war for America’s soul (in this telling, the racially mixed group includes his own adult sons, numerous freed slaves, a Native American, and a Jew), and by the time he raided Harper’s Ferry in 1859, the entire country had figured out that a peaceful resolution was impossible. Nobody reading this needs to be reminded of all the ways in which the Civil War shaped the country, right up to the present moment, but we’ll settle for just one: The defenders of slavery in 1850s Kansas wore red.

Charismatic, terrifying, and weird as he is, John Brown is a glorified supporting character in The Good Lord Bird — and that’s a big part of what prevents the series from becoming an especially bloody and dour version of a white-savior narrative. The story is told through the eyes of a young, educated teenage slave (Joshua Caleb Johnson) who dresses like a girl at Brown’s request (for his own protection, supposedly) and is given the nickname “Onion.” Onion’s voiceover narration is at once innocent and knowing. It depicts the prelude to the Civil War, and the physical and emotional experiences of servitude and oppression, from a faintly hopeful but mostly cynical-to-resigned perspective, drawn from generations of evidence that no matter what craziness white folks get themselves up to, daily life for Black folks won’t change too much, so you’d better take your joy where you can get it.

The effect is a bit like a time machine, a portal to fuller understanding: not just what happened, but where it led and what else it helped create. More so than other fictional retellings of Brown’s crusade — including Cloudsplitter and Raising Holy Hell — The Good Lord Bird, book and series, seem to speak both of and for the present, and to view both the Black and white characters as equal participants in history, even though one group legally had absolute power over the other.

Faithfully adapted by executive producers Hawke and poet-novelist Mark Richard from James McBride’s National Book Award–winning 2013 novel, the series draws equally on two schools of storytelling: the raunchy, nasty, picaresque comic epic, exemplified by the likes of The Canterbury Tales, Candide, and Huckleberry Finn; and meandering, pot-scented Westerns like Pat Garrett and Billy the Kid, The Outlaw Josey Wales, and the Coen brothers’ adaptation of True Grit. The show’s screenwriters and directors (including Albert Hughes, Darnell Martin, and Kevin Hooks, who started out as an actor in the original Sounder, then directed a superb ABC-TV remake 30 years later) paint a savage, often corrosively funny portrait of the battle between pro- and anti-slavery forces in so-called Bleeding Kansas in the years before the Civil War, with everyone who hasn’t picked a side and taken up arms getting torn up by history’s thresher.

Onion meets Brown in the opening scene of the series, a violent confrontation between Brown and a slaver (David Morse) that ends with Onion being orphaned and folded into the abolitionist’s traveling militia. Brown presents himself to Onion as a mentor and father figure, but that’s like finding out that Captain Ahab wants to adopt you: It only seems like a good deal if you’re stuck on a ship on the high seas and the alternative is taking your chances in a rowboat surrounded by sharks. Traumatized and cowed as he is, Onion finds Brown amusing and pathetic as often as he finds him horrifying and thrilling. By the second episode of the series — which lets us spend time with Onion on his own as he takes a job in a brothel in a medium-size prairie town, and secretly teaches the Black madam, Natasha Marc’s Pie, how to read — Onion starts to mature quickly, developing a bleaker outlook and a survival sense that flirts with nihilism.

Brown’s followers and sons aren’t gung ho about him all the time, either. As Onion informs us, Brown’s followers come and go, their ranks changing out almost every few months, because they get tired of the bloodshed, start feeling homesick, lose interest or stamina, or figure they’d better cut out at some point otherwise Brown will get them killed. Also, Brown’s speeches go on for hours. His son, Owen (Beau Knapp, brilliant as the craven, tormented cop in Netflix’s Seven Seconds), is the first one to urge the old man to wrap things up or finish the story on the road.

Brown was sometimes known as God’s Angry Man (as per the title of a 1932 novel about Brown by Leonard Ehrlich). But while The Good Lord Bird teases the possibility that God is indeed on his side, or animating his rage, it has a Coen-esque sense of when to stop giving out clues and err on the side of mystery. There are moments in early episodes where Brown is saved from death not by any innate skill (though he is handy with pistols) but because his foes (including Steve Zahn, who shows up in episode two playing a dumb, horny, racist cowboy in love with Pie) are not as smart as they think, or have missed a crucial piece of information that might’ve prevented them from dying stupidly. “God’s Lucky Man” might’ve been just as apt a description, though the end of Brown’s life cuts against that adjective. He’s certainly more blessed than Black abolitionists would be under similar (armed) circumstances. When Lt. Col Jeb Stuart (Wyatt Russell), a future Civil War legend, comes to him alone to warn him to leave Kansas or be killed, it’s hard to imagine John’s idol, the Black abolitionist Frederick Douglass (played by Daveed Diggs in full-throated preacher mode), being treated with similar care and understanding if he’d worn revolvers on his hips. The series is not just aware of the irony: It stages its scenes in a way that leads us to connect what happened back then with what’s happening on American streets right now.

The series’s soundtrack, which includes a number of 20th and 21st century recordings of blues, gospel, rhythm and blues, and soul songs, helps a great deal in establishing a historical through line. Like the end-credits music of Deadwood, and like certain soundtrack choices on HBO’s subversive, wild-assed sci-fi drama Lovecraft Country, these music cues feel like much more than show-off-y anachronisms. To some degree, all of the represented genres are rooted in the lived experience of inequality, and the difficulty (and necessity) of trying to either rise above that or momentarily escape it, through sin as well as salvation. When music and imagery join forces — as in a dazzling trial-and-hanging sequence in the Hooks-directed second episode, scored to Nina Simone’s “I Shall Be Released,” which includes an exchange of shots that makes it seem as if a condemned Black abolitionist is looking into the future through the eyes of Onion — The Good Lord Bird speaks to the present as well as the past. This is one of the most thoughtful and surprising series of an already impressive year: a historical epic of real vision.