The Squad Is Growing: A New Crew of Left Challengers Is Bringing Movement Politics to Congress

It’s not just AOC, Omar, Pressley and Tlaib. This crop of organizers - turned-politicians — alongside the Squad — plans to usher in a progressive revival in the House of Representatives.

October 22, 2020 Natalie Shure In These Times
Printer friendly
The Squad Is Growing: A New Crew of Left Challengers Is Bringing Movement Politics to Congress Published October 22, 2020 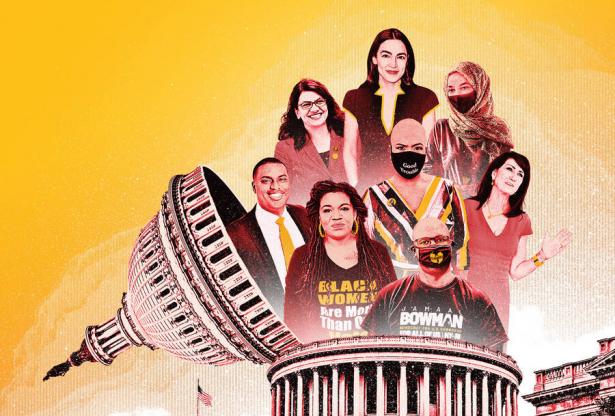 Ryan Olbrysh // In These Times,

Progressives and democratic socialists scored victories up and down the ballot in the 2020 primaries — including in congressional races. Four challengers from the Left, who took on entrenched incumbents, are likely to join the left-leaning Squad in the House: Jamaal Bowman and Mondaire Jones of New York, Marie Newman of Illinois and Cori Bush of Missouri (see side­bars for individual profiles). By bringing an insurgent mindset to the halls of power, this burgeoning group aims to shake up mainstream Democratic politics by putting social movement demands at the forefront of the national agenda.

This more disruptive approach debuted on Capitol Hill in November 2018. Weeks before being sworn into Congress, Ocasio-Cortez threw tradition and decorum out the window and joined an occupation with the Sunrise Movement outside the office of Rep. Nancy Pelosi (D-Calif.), who was angling to regain her role as House speaker after Democrats won a new majority in the chamber. The Sunrise Movement, a youth organization pushing for action on climate change, was pressuring Pelosi to create a new committee on climate change with significant power — unlike tooth­less climate committees of the past. The spectacle of a soon-to-be congresswoman standing alongside youth activists to confront a top-ranking official of her own party lent urgency and credibility to the organizers’ demands.

Journalist Ryan Grim covered the scene as it unfolded. As he recounts in his book, We’ve Got People: From Jesse Jackson to Alexandria Ocasio-Cortez, the End of Big Money and the Rise of a Movement, Pelosi’s deputy chief of staff, Drew Hammill, was “red in the face, livid” as he asked Grim, “Can you tell them we support every single thing they’re protesting us for” Ocasio-Cortez later told Grim, “That is absolutely true … what this just needs to do is create a momentum and an energy to make sure it becomes a priority for leadership.”

The episode reflects the promise and strategy of an ascen­dant left-wing elec­toral movement striving to replace ho-hum Democrats with bold candidates funded by small-dollar donations and running on universal programs. By embracing movement politics, the logic goes, these officials can push the Democratic Party left while racking up wins. With Bowman, Bush, Newman and Jones likely to win in their heavily Democratic districts, it’s becoming clear this party-wide shift is already in motion.

While Grim’s book follows the U.S. electoral Left back to Rev. Jesse Jackson’s 1988 presidential run, the new movement picked up full steam after Vermont Sen. Bernie Sanders’ 2016 presidential campaign, which directly challenged the Democratic establishment’s cozy relationship with corporate interests while elevating broad redistributive policies like universal healthcare, free public college, taxing the rich and raising the minimum wage. While Sanders lost his 2016 primary to Hillary Clinton, his coalition’s fingerprints are all over the movement: Ocasio-Cortez was a 2016 Sanders campaign volunteer, an experience that helped inspire her to protest the Dakota Access Pipeline at Standing Rock and later run for office.

The founders of the Justice Democrats — an organization at the heart of the new progressive electoral infrastructure — were Sanders organizers and staffers. Both of Sanders’ presidential runs helped swell the ranks of the Democratic Socialists of America — of which Ocasio-Cortez, Tlaib, Bowman and Bush are all dues-paying members.

But if the left-most flank of House Democrats doubles its membership in 2021, it does so in a very different world than existed during primary season. Months into a pandemic, nationwide uprisings for racial justice and crises in evictions and unemployment, the expanding Squad is taking power at a tumultuous moment — one that demands unabashed progressive politics more than ever. As Grim tells it, the small-but-growing left flank already has had a disproportionate impact on American politics. ?“Without them, you don’t have a Green New Deal — that simply wouldn’t exist,” Grim says by phone. ?“And given that the Greenland ice sheet is melting and California is turning into ashes … they’re at least giving Democrats the possibility of coming up with some measure of a solution that meets the scale of the problem.”

This progressive upsurge has pressured other Democratic elected officials to adopt more left-leaning positions—particularly compared with the party’s previous standard-bearers. In 2016, Sanders famously fought intransigent Democratic Party leadership to include a $15 minimum wage in the party platform, after Clinton argued $12 was enough; by 2019, 206 of 235 House Democrats voted for a $15 wage bill. In 2018, 58% of running Democratic candidates supported single-payer healthcare, compared with only 27% in 2010. Arguably, Democratic presidential nominee Joe Biden is running on a more left-wing platform than Clinton did just four years ago, including more extensive public funding for healthcare and climate change mitigation.

For Alexandra Rojas, executive director of the Justice Democrats, this evolution is a proof of concept that a formidable left primary strategy can change the party not only by replacing members but just by threatening to. ?“I know, for a fact, [Senate minority leader] Chuck Schumer (N.Y.) would not be endorsing the THRIVE Agenda alongside dozens of other progressive groups if it wasn’t for fear of a primary challenge,” Rojas says. THRIVE is a proposed stimulus package centering investments in communities of color, curbing climate change and creating union jobs. ?“This movement is powerful enough to get him and others out of office,” she says.

Sean McElwee, co-founder of polling firm Data for Progress, argues that even losing primary challenges — like the 2020 campaign of progressive Mayor Alex Morse against incumbent Rep. Richie Neal (D-Mass.) — can have a positive effect. ?“Having two million spent against you in a primary challenge is an unpleasant experience and a lot of [incumbents] would seek to reduce the pain of that,” McElwee says.

If Morse runs again, as he has suggested he will, he would be in good company: Newman and Bush won their rematches against incumbents, having more name recognition and strengthened coalitions. Moreover, McElwee notes, redistricting stands to make incuments more vulnerable than usual in the next cycle as their voting bases shift, opening opportunities for challengers.

If the movement has proven strong enough to knock out incumbents, it also has proven capable of protecting favored lawmakers. Tlaib, Omar and Ocasio-Cortez handily beat their primary challengers this year, despite breathless news reports that their seats were in peril. Pressley ran unopposed. In Massachusetts, Sen. Ed Markey — a Democrat who’s recently taken on more progressive positions, including co-sponsoring the Green New Deal—easily fended off a primary challenge from moderate Rep. Joe Kennedy III. That race began with polls showing Markey down 14 points in a state where a Kennedy had never lost but ended in a 10-point victory for Markey, thanks in large part to energetic support from progressive groups, including more than a million phone calls made by the Sunrise Movement. ?“Our allies worked their asses off to make that happen,” Rojas says. ?“That was important to show incumbents that if you lean into the progressive movement, we are powerful enough to have your back if you have ours.”

Still, even if Biden defeats Trump and the Democrats retake the Senate, passing a Green New Deal or Medicare for All will remain a tall order in Congress, where the status quo reigns supreme. As the fight over the vacancy created by the death of Justice Ruth Bader Ginsburg illustrates, Democrats already have their hands full simply beating back power grabs from the Right.

Ultimately, a powerful left flank in Congress is only as strong as the movement it’s beholden to — and that power can’t be built through elections alone. The growing Squad plans to leverage their ties to movement politics — such as Black Lives Matter and labor organizing — and, like Sanders, have used their platforms to encourage turnout at protests and picket lines.

Movement politicians understand that real change comes from people demanding it in the streets. And according to Rojas, these new faces in the Democratic coalition are sticking around. ?“The base of the Democratic Party is increasingly looking like Alexandria Ocasio-Cortez, Jamaal Bowman, Cori Bush and Ayanna Pressley,” Rojas says. ?“If we want to build the Democratic Party of the future, you’ve got to embrace the future. And I think that’s what these primaries are showing. In many ways, I think they’re inevitable.”

Bowman, Bush, Newman and Jones each talked with In These Times to reflect on their wins — and what that “Democratic Party of the future” might look like (see sidebars).

As a 501©3 non­profit publication, In These Times does not oppose or endorse candidates for political office.

[Natalie Shure is a Los Angeles-based writer and researcher whose work focuses on history, health, and politics.] 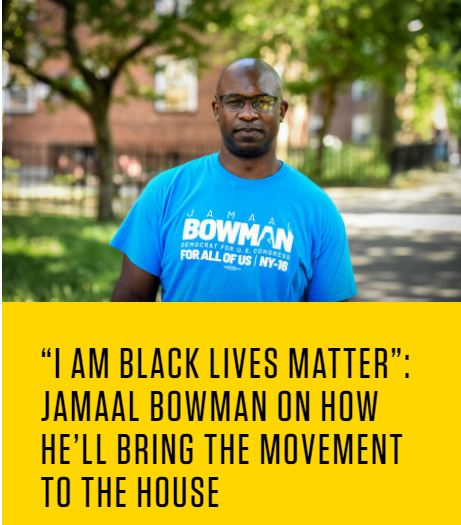 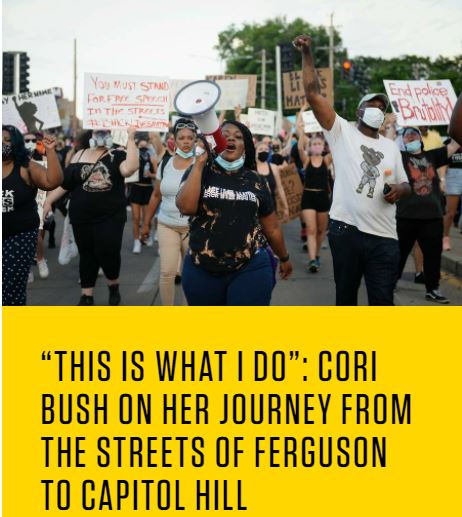 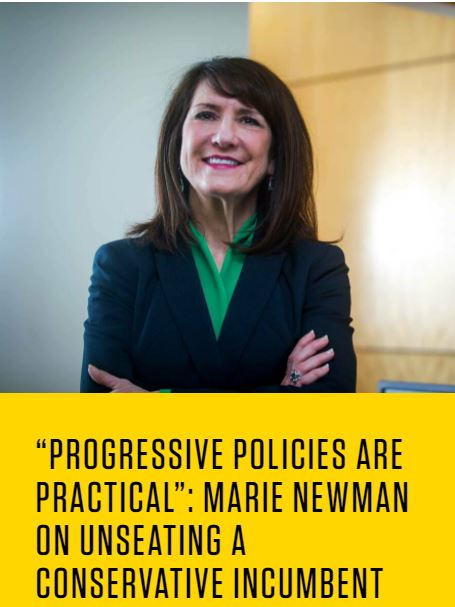 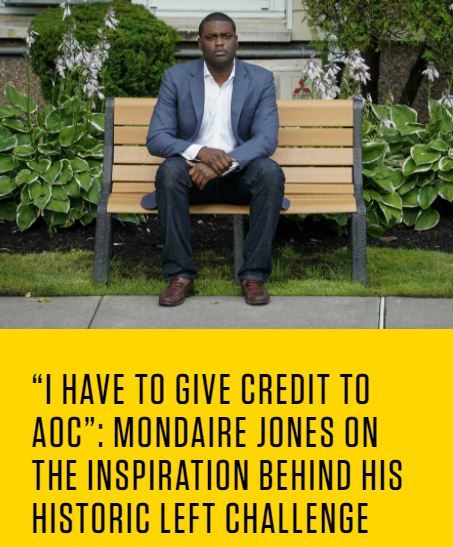