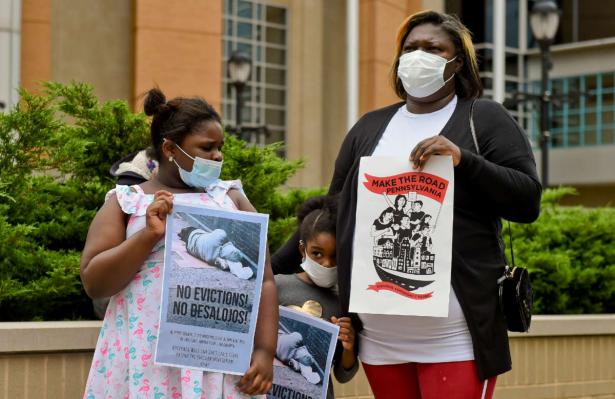 Migreldi Lara, a single mother of three who is out of work as a hair stylist due to the pandemic, stands with her daughters during a protest outside the Berks County Services Building in Reading, Pennsylvania, on September 1, 2020., Ben Hasty/MediaNews Group/Reading Eagle via Getty Images

The Bureau of Labor Statistics (BLS) monthly jobs report for September proves with numbers what we have all known anecdotally and experientially: This pandemic-laced recession has been disastrous for women, especially women of color.

Between August and September, 865,000 women dropped out of the workforce, a rate four times higher than that for men. One in 9 Black women, and 1 in 9 Latinas, aged 20 and over, respectively at rates of 11 percent and 11 percent, became unemployed in September. Compare this to white men who have an unemployment rate of 6.5 percent and white women who have a rate of 6.9 percent.

From the start of the pandemic, job losses for women have been so much greater than for men that some feminist policy makers have called this a “shecession,” in contrast with 2008. And “she” is most certainly a woman of color.

Sometimes numbers — percentages and charts — can obscure social wounds. We can see the 11 percent job loss figure for Black women, but we don’t necessarily associate that number with the impacts on people like Kyaira Jackson, a seventh grader in my daughter’s class, whose mother, the sole earner for her family, just lost her job at Walmart. Her mother, Jazmine Pinckney, asked me if I could help return some of Kyaira’s school things as the family would be moving soon. As is the case for most Americans, Jazmine’s family’s health care, as well as her ability to pay rent and buy food, were solely and relentlessly dependent on her wage. She would now move back to her childhood home in Atlanta, back to the house she left to make her way in the world, this time with her two young children.

Jazmine’s life, like the lives of so many Black women in this pandemic, is like Ariadne’s thread, leading us through the maze of capitalist social relations. It helps illuminate the monsters behind the inequality that existed long before the virus was even heard of. The first step to understanding the devastation caused by the virus in the lives of women and people of color, is to understand that it was merely the spark; the kindling was there all along.

Let us begin with the wage, since its tyranny shapes not just our working lives but crucially, our lives outside of the workplace.

Between August and September, 865,000 women dropped out of the workforce, a rate four times higher than that for men.

Well before the pandemic, women in this country earned 82 cents to the dollar that a man earned, while Black women earned 62 cents on the dollar, and Latina women earned 54 cents on the dollar. Often it is difficult to determine cause and effect for gendered wages. It is because women earn less than men that they tend to work part-time and spend their unwaged time doing care work in the home, as both child care and elder care remain exorbitant in the U.S. But it is also true that certain jobs become less prestigious and lower paid when women become the ones primarily performing them. Teaching was treated with much respect and remunerated better in the late nineteenth and early twentieth century when it was mostly men who became teachers; now, K-12 teachers are mostly women, and they are neither as well paid nor well respected.

Waged work remains inextricably braided with unwaged work. Lack of access to quality child care and elder care forces women to consider quitting waged work before their male partners since their jobs were less paying to begin with. This in turn ensures that women are pushed into, or remain locked into, lower-paid work due to “lack of experience” or for having taken “career breaks.” Just under a third of single mothers were already living below the poverty line; since the pandemic, over a million of them have lost their jobs.

When schools and child care centers closed in the spring, and as they continue to offer partial services through the fall, many women, particularly white women, decided to leave the work force. As Stefania Albanesi put it in The New York Times, “white families tend to have higher wealth and higher average income so they can afford to reduce labor supply, compared to most African-American households, where earnings are quite low.”

Just under a third of single mothers were already living below the poverty line; since the pandemic, over a million of them have lost their jobs.

If our analysis stops at the doors of the workplace, and only pays attention to the wage gap or unemployment figures, it will fail to see the multiple ways in which waged work orchestrates the unwaged slices of our lives. Ecologists use the term “cascade effect” as a concept to understand how primary extinction of a species can trigger multiple secondary extinctions. The tyranny of the wage has a similar cascade effect on our life-making.

Consider the health of Black women and Latinas during this pandemic. Low wages certainly determine the kind of health care these women have or whether they have it at all. But we should not only be concerned about low wages in the here and now. Historically, Black communities have been forced to live in neighborhoods that have poor air quality and/or contaminated water. They are 75 percent more likely to live near polluting industries that produces hazardous waste.

Schools that predominantly serve Black and Brown communities are chronically underfunded and the first ones to close during a financial crisis. Consistent redlining through the years have ensured that these neighborhoods are also more likely to be what the federal government calls “food deserts” or “areas in which residents are hard-pressed to find affordable, healthy food.”

When a virus with no apparent cure comes into the lives of people in these communities, who, then, shall we blame for the disproportionately high death rates? It is not simply the pandemic or the recession that is driving the disproportionate harm experienced by women of color in this moment. It is an economic system stacked against them.

Tithi Bhattacharya is a professor of South Asian History and the director of Global Studies at Purdue University. Her recent coauthored book includes the popular Feminism for the 99%: A Manifesto (Verso, 2019), which has been translated into over 25 languages. She writes extensively on Marxist theory, gender and the politics of Islamophobia.