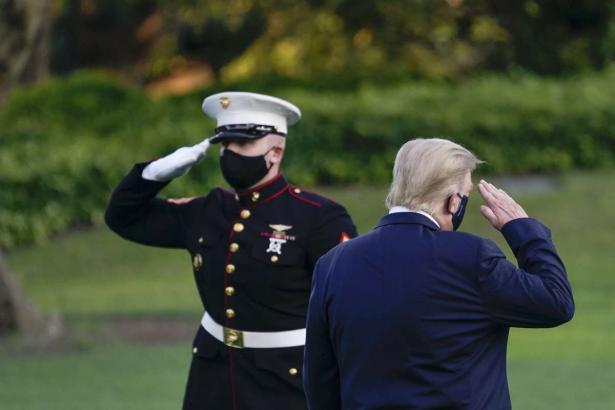 Donald Trump salutes as he prepares to board Marine One for Walter Reed National Military Medical Center on the South Lawn of the White House on October 2, 2020, in Washington, D.C.,Drew Angerer/Getty Images

For months, Donald Trump has been mounting a preemptive strike against the democratic election process. He signals his intent to manipulate — indeed, steal — the presidential election in the event that Joe Biden wins. With no evidence to support him, Trump repeats the mantra “voter fraud” to lay the groundwork for political, legal and extra-legal challenges to a Biden victory. In an unprecedented move, Trump refused to commit to a peaceful transfer of power as he orders right-wing militias armed with assault weapons to “stand back and stand by.”

Now that Donald Trump has tested positive for COVID-19, all bets are off. After months of recklessly discouraging social distancing and mask wearing, the chickens have come home to roost. Trump has tried mightily to change the subject away from the coronavirus and his criminal responsibility for more than 207,000 deaths and over 7 million people in the United States who have the virus. But with Trump’s infection, that strategy is now dead.

If Trump’s symptoms had worsened, he could have temporarily handed over the presidential reins to Vice President Mike Pence under the 25th Amendment. In the event that Trump becomes very ill and refuses to put Pence in charge, the 25th Amendment allows Pence and a majority of the cabinet, or a body Congress lawfully designates, to declare Trump unable to discharge the duties of the presidency. Pence would then take over. If Trump tells Congress that “no inability exists,” two-thirds of the members of the Senate and the House of Representatives could decide that Trump is still unable to discharge his presidential duties, and Pence would remain acting president until after the election. He could become the GOP nominee or the Republican National Committee could select a new nominee. Ballots already cast for Trump in early voting would be transferred to his replacement. Each state would decide how to proceed as there is probably insufficient time to print ballots with the name of a new nominee. If Trump dies, Pence would become acting president and if he is unable to serve, House Speaker Nancy Pelosi is next in line.

The election will not be decided on November 3. Since there are an unprecedented number of people voting by mail-in ballots due to the pandemic, it could take weeks to finish resolving challenged ballots and counting the votes. Nevertheless, Trump, mindful that mail-in ballots generally tilt toward Democratic candidates, has insisted that the winner be declared on November 3.

Trump could order postal inspectors to impound mail-in ballots by claiming forgery or foreign fraud, so they might not be counted.

The Trump campaign is mobilizing “an army for Trump,” calling on “all able-bodied men and women to stop the election from being stolen by Democrats.” Although it’s unclear just what this army is being recruited to do, a coalition of progressive organizations has mobilized more than 6,000 “election defenders.”

Are we doomed to suffer a coup d’état and four more years of Trump’s bullying, racism, misogyny, cruelty, lying and xenophobia? Or can his assault on the very essence of democracy be stopped?

As Biden has been leading in the polls, Trump confirmed at a September 25 rally in Virginia that if he loses the election, “We’re not going to stand for it.” Reiterating his false claim of voter fraud from mail-in ballots, Trump told the crowd, “We’re not going to lose this except if they cheat.”

According to the Transition Integrity Project (TIP), “Trump is likely to contest the result by both legal and extra-legal means, in an attempt to hold onto power.” The bipartisan group of experts, which conducted a series of election crisis scenario exercises, warns, “The potential for violent conflict is high, particularly since Trump encourages his supporters to take up arms.”

TIP’s report says “there is a chance” that “Trump will attempt to convince legislatures and/or governors to take actions — including illegal actions — to defy the popular vote.”

The election is actually multiple elections. Each state controls its own election process. Harvard professor Daniel Carpenter described a scenario in which Biden “wins a plausible victory and Republicans move to undermine it.” He posed a hypothetical situation in Arizona or North Carolina where Biden wins a state majority but the state legislature decides to give their delegates to Trump.

Barton Gellman reported in The Atlantic that “the Trump campaign is discussing contingency plans to bypass election results and appoint loyal electors in battleground states where Republicans hold the legislative majority.”

If states refuse to certify or report slates of electors to the Electoral College, that will result in “underpopulation” and force the election into the House of Representatives, according to Carpenter. “[I]f the Electoral College is underpopulated and the courts don’t intervene, or maybe even if they do, the election is thrown to the House,” he said. The states would then vote by delegations. The Democrats have a majority of members, but the Republicans have a majority of delegations because each state has equal voting power and there are more red states than blue states.

The electoral votes are to be opened before a Joint Session of Congress on January 6, 2021. But the Electoral Count Act, which governs the counting of electoral votes, is rife with ambiguities.

A constitutional crisis could result if the legislature of a state submits a vote certificate that is different from that which the state’s Democratic governor submits, and the GOP-controlled Senate disagrees with the Democratic-controlled House. The conflict would invariably end up in the Supreme Court.

“I would hope that the Supreme Court would make the winner of the Electoral College the President if it came to that,” Erwin Chemerinsky, dean of Berkeley Law School, told Truthout. “If not, theoretically it could depend on the military. I am skeptical that state governors and governments could do much.”

Trump wants Amy Coney Barrett on the high court to resolve just such a dispute in his favor. Barrett did research and provided assistance with briefing for Bush v. Gore, in which a 5-4 majority of the Supreme Court overturned the Florida Supreme Court’s order of a statewide manual recount in a very close election.

Barrett, who helped install George W. Bush as president, would likely be a loyal foot soldier in Trump’s army as well.

But Senate Majority Leader McConnell’s plan for a rushed Senate confirmation of Barrett by October 26 could be derailed by the loss of his slim Republican majority. The GOP has a 52-48 majority in the Senate. Thus far, two Senate Judiciary Committee members, Sens. Mike Lee (R-Utah) and Thom Tillis (R-North Carolina), have tested positive for coronavirus. Sen. Ron Johnson (R-Wisconsin) also had a positive test. Sen. Susan Collins (R-Maine) has indicated she would vote against Barrett’s confirmation and Lisa Murkowski (R-Alaska) opposes filling Ruth Bader Ginsburg’s seat before the election. With five GOP senators not voting for confirmation, Barrett would not be confirmed.

Trump and Biden have unequal power to challenge the results of the election. Rosa Brooks, co-founder of TIP, contrasted Trump’s “awesome coercive powers” with Biden’s lack of power to contest the election results. “Joe Biden can call a press conference; Donald Trump could call on the 82nd Airborne,” Brooks told Geoffrey Skelley at FiveThirtyEight.

Will the Military Facilitate or Halt Trump’s Coup?

But would the 82nd Airborne help Trump illegally overturn the election results?

Indeed, Pentagon officials said in late September that top military leaders could resign rather than take on protesters in the streets in the event of election unrest.

On June 1, Trump threatened to invoke the 1807 Insurrection Act and deploy active-duty troops to quell Black Lives Matter protests. In response to Trump’s deployment of National Guard troops to Washington, D.C., and his threats to deploy federal troops more widely, 89 former defense officials wrote on June 5, “We are alarmed at how the president is betraying [his] oath [to support and defend the Constitution] by threatening to order members of the U.S. military to violate the rights of their fellow Americans.” They said that Trump gave governors “a stark choice: either end the protests that continue to demand equal justice under our laws, or expect that he will send active-duty military units into their states.” The former defense officials urged Trump “to immediately end his plans to send active-duty military personnel into cities as agents of law enforcement, or to employ them or any another military or police forces in ways that undermine the constitutional rights of Americans.”

Although some congressional Republicans have pushed back against Trump’s suggestion that the winner of the election may never be known, it remains to be seen whether they will resist his attempted coup. Thus far, they have walked in near unanimous lockstep with Trump, notably during his impeachment proceeding and his Supreme Court nomination of Barrett even as votes are being cast.

Although Trump’s COVID-19 outbreak is the wild card here, the prospects for a peaceful transition to a Biden administration if Trump is in charge are dubious.

Ian Bassin, executive director of Protect Democracy, is optimistic, however. “For those worried that Donald Trump could single-handedly defy the election results and hold on to power, fear not — he cannot do that,” Bassin wrote in an email to Truthout. “In order to do that, he’d need accomplices at every level, throughout the country — in the executive branch, in the Congress, in the courts, in state legislatures, in the media.” But a landslide in favor of Biden could make potential accomplices feel less confident in supporting Trump if he were to claim that the results are ambiguous or fraudulent.