The true star of “Borat Subsequent Moviefilm” is Borat’s daughter, played by Maria Bakalova. She’s also the source of its most incisive critique. 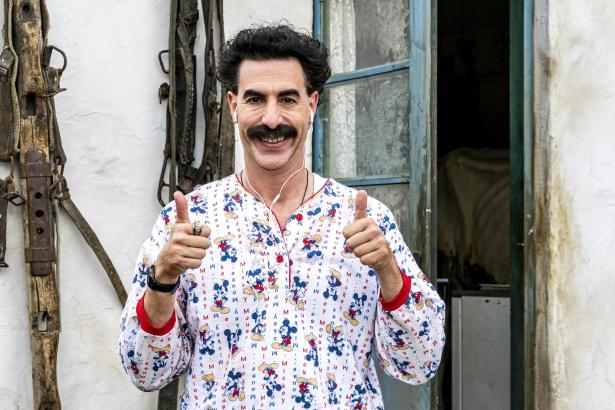 Sacha Baron Cohen is not the star of his new movie, and I suspect he knows it.

The true star of Borat 2 — excuse me, Borat Subsequent Moviefilm: Delivery of Prodigious Bribe to American Regime for Make Benefit Once Glorious Nation of Kazakhstan — is Maria Bakalova, who plays the daughter of disgraced Kazakh media personality Borat Sagdiyev (Baron Cohen). Bakalova is actually 24, but in the film, she is 15-year-old Tutar Sagdiyev, the oldest unmarried woman in Kazakstan (according to Borat), playing sidekick to her trickster father on his second trip to America.

Having destroyed the reputation of Kazakhstan with his 2006 film (the first Borat, the one that prompted every dude you know to say “mah waiiife” for a good decade when he wanted to be funny), Borat has been doing hard labor as punishment. But he is summoned to the premier’s office and given the task of offering a gift to America’s leadership to restore Kazakhstan’s standing in the eyes of its new president, “McDonald Trump.” He knows just what to present to Trump’s closest colleague, Michael Pence, vice premier of America: a monkey.

When he arrives stateside, Borat discovers Tutar has stowed away in the monkey’s crate for the trip and, well, gotten hungry on the way over. That makes him realize something: Maybe she would make a better gift? She is delighted by the idea, lit up by the notion that she might be the next “queen of America,” like Melania Trump — who, after all, is from Slovenia. Slovenia’s not all that not close to Kazakhstan, but it’s closer than America.

To tackle that challenge, though, she’s going to need a makeover. And in typical Borat fashion — with unsuspecting hairdressers and dress shop owners and other civilians not quite realizing they’re the object of fun — Tutar is transformed from a ratty-haired gremlin into a woman. 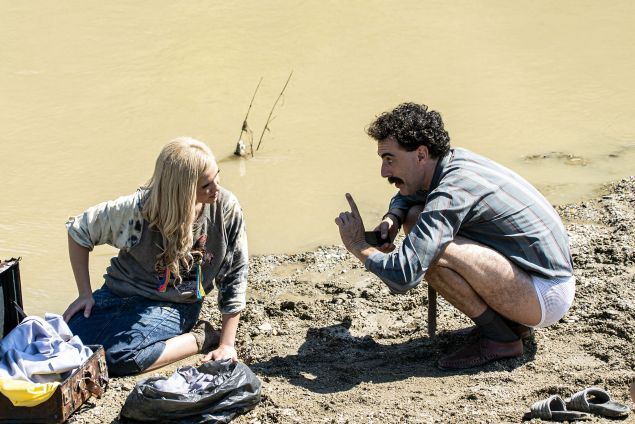 Long, dyed-blonde hair with barrel curls, bold lipstick and eye makeup, and a form-fitting dress: If Tutar’s makeover looks familiar, it’s because you’ve seen it on TV before. The look that ruled Hollywood for decades and perhaps reached its apex in Baywatch star Pamela Anderson (the unlucky object of Borat’s affection in the first movie) has migrated to Fox News, where many have noted the clone-like similarities among on-air female talent.

Bakalova has a tough job in Subsequent Moviefilm, playing a teenager nearly a decade younger than herself. A teenager who has been living in a stable behind her family’s hovel and fed lies all her life about what women can and cannot do: Women cannot drive. They cannot read. They cannot be educated or choose whom to marry or engage in, uh, sexy times. They cannot touch their “vagines,” because of the teeth.

But Bakalova plunges into it with aplomb and steals the show from Baron Cohen, who mostly reprises his old shtick, tricking people into saying things they probably wouldn’t want to be seen onscreen saying. Although, who knows? If the past four (let alone 14) years have shifted anything, it’s our sense of what people will do on camera, whether to get attention or just because they’re a huge honking racist. 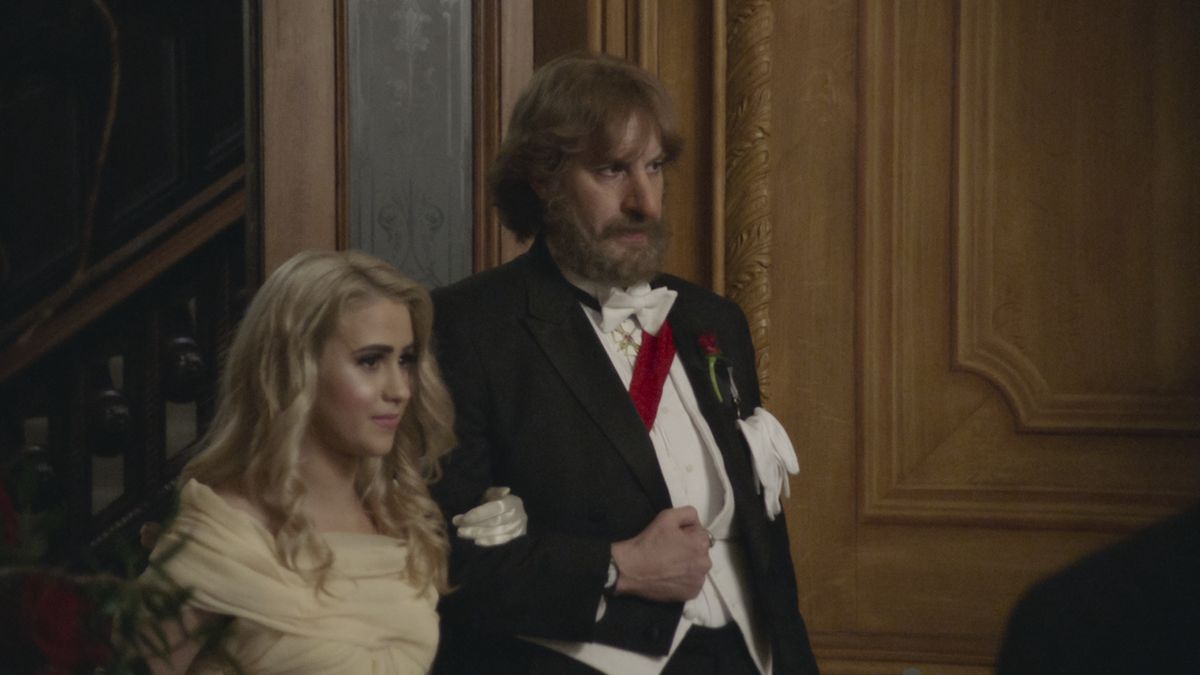 Tutar and Borat at a ball.

In any case, Bakalova’s total commitment to the role is both impressive and necessary, because this movie requires her to get leered at by older men. A lot. It happens at stores and in public places, at a debutante ball (where a man says $500 would be a “fair price” for her, to the disgust of the man’s daughter), and at a plastic surgeon’s office, where Tutar and Borat are pricing out the cost of giving her huge breasts and maybe evening out her nose a little. And it happens, as you may already know, in a room with Rudy Giuliani.

The Giuliani moment is what got the most attention after the reviews started pouring in on Wednesday. In case you were lucky enough to miss the news: There’s a sequence in the movie in which Tutar — who has been rejected by Pence at CPAC, sort of, and has settled on trying to marry Giuliani because he is close to Trump and, unlike several former presidential advisers, isn’t in jail — decides to pose as a journalist to get close to Giuliani.

Dressed in nude stilettos and a mint-green, skin-tight sheath dress, she arranges to “interview” Giuliani in a midtown Manhattan hotel suite, and he agrees. He calls her darlin’ a lot and seems mostly just flattered by the attention in the interview.

Then he follows her into the bedroom, drink in hand. He says “c’mere, c’mere” several times, moving her closer to him and removing her microphone. She removes his. He says she should give him her number and address. He sits on the edge of the bed. He lays down. He puts his hand down his pants, adjusting something in the crotch region for about 10 seconds, and then Baron Cohen, clad in a bodysuit made to look like lingerie, rushes in and declares that Tutar is 15, “too old for you.”

The scene is edited, and Giuliani has denied that he was doing anything untoward, saying he was merely tucking in his shirt. (It does look as if he could plausibly be tucking in his shirt, though I’m not sure why one would do that while lying down, or why a simple task would take that long.) After the past few years, I’m not particularly inclined to believe Rudy Giuliani about much of anything. Here’s a troubling possibility: He was reaching down to fondle his genitals, potentially without consent or prompting, while in the room with a virtual stranger who is obviously far younger than he, but whom he had no reason to think is a teenager. 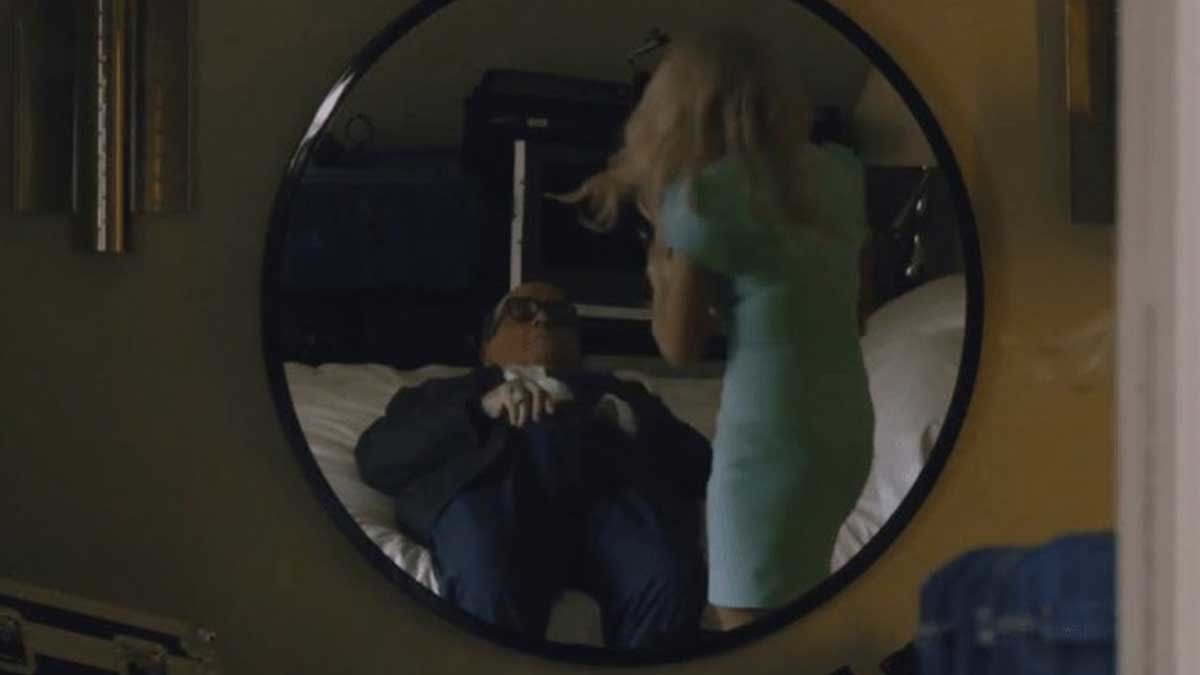 Giuliani and “Tutar” in that scene in Borat Subsequent Moviefilm.

Anyhow. Perhaps more revealing than the incident itself is what the film points out through Bakalova’s character: A certain womanly aesthetic, appealing to a certain sort of man, is prevalent enough that it can be easily exploited.

The Fox News look, after all, is the network’s inheritance from its founder Roger Ailes, whose sexual harassment and decrees that women should wear short skirts on camera are no secret. It’s hardly only conservative men who are inclined to give credence for no real reason to a pretty young woman who flirts with them a little. But it’s equally true that conservative men are certainly susceptible (recall the case of Maria Butina), and that adopting a particular look can go a long way for ladder-climbers or would-be grifters.

That’s probably why, watching Tutar’s antics in this film, I found myself thinking of White Noise, a documentary also out this week that’s about three notorious figures on the alt-right: shit-stirrer and Pizzagate conspiracist memelord Mike Cernovich, avowed white nationalist Richard Spencer, and anti-immigrant YouTube personality Lauren Southern. Directed by journalist Daniel Lombroso, who spent years following each of the trio around, the movie follows the trajectory of a certain kind of young, attractive racist American in public life over the past few years, and the role of the internet in their rise to fame.

White Noise is a great and illuminating film, far more engaging and smart than most journalistic profiles of each of these people. But here’s the most striking realization, by the end: This is a portrait of loud, proud, opportunistic grifters — less ideologues than people who’ve figured out how to game the system to get the most eyeballs (and, very importantly, money). Gaming that system, all pastiche and depthless intensities, is chiefly a function of figuring out how to project an image your audience finds appealing.

The grifting impulse that has taken hold in America, from Fyre Festival to Anna Delvey to whatever Jacob Wohl’s whole deal is, owes no fealty to specific political parties. The con man is an archetype as old as time, and certainly a time-honored element of American culture. The internet has made it very simple to create a persona of your choice — and far more rewarding to loudly proclaim it. The way social media platforms enable grifters to scramble to the top of the heap is something all three of the White Noise subjects know intimately, and something Lombroso captures with skill.

But it seems at times like Southern understands it the best. Beautiful, blonde, with an arch smile and a bold, confident exterior, she fits the archetype precisely. As captured in White Noise, she gives off distinct Regina George vibes, and it works for her as long as she’s willing to ignore the sexual harassment directed at her.

Living in the boys’ club of white supremacist internet personalities, she makes it clear that she knows her fame comes from both her ability to take extreme positions, which “puts her on the map,” and her visibility as a pretty woman whom men like to watch laugh at their jokes and say outrageous things that confirm their biases. In one sequence, we listen in on her side of a phone conversation with Gavin McInnes, the (married) founder of the Proud Boys, that strongly suggests he attempted to get her to sleep with him. (Onscreen text notes that the filmmakers contacted McInnes and that he denied that he had done such a thing.) 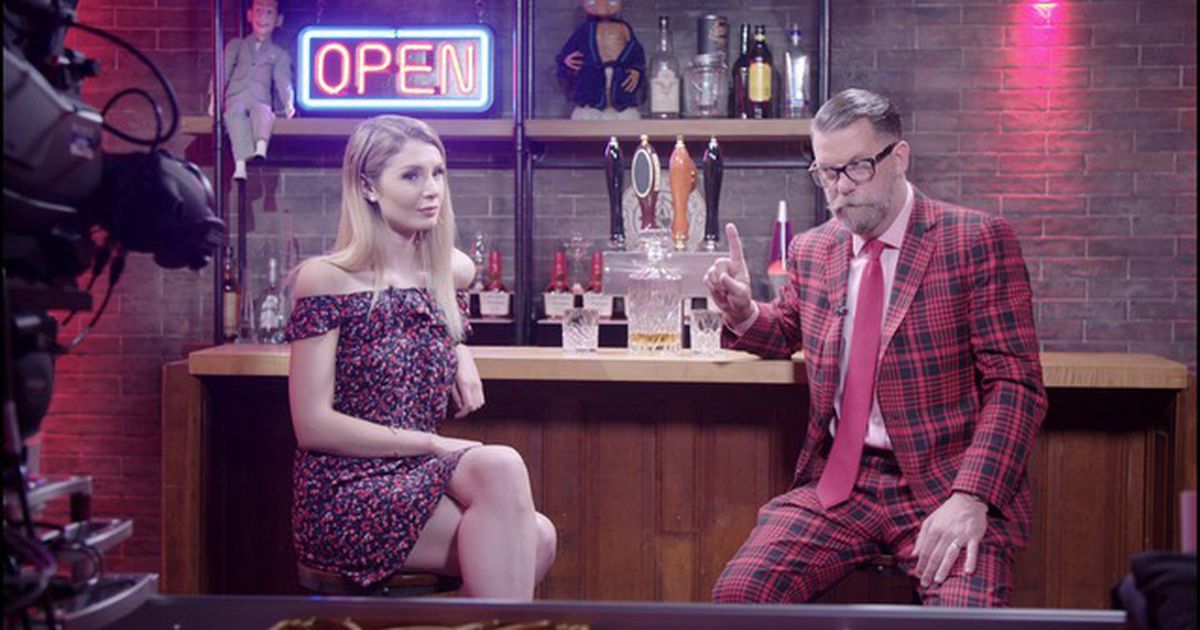 But Southern is clearly proud of her image, and of the spot in the white supremacist landscape she’s cultivated. “There’s a lot of clicks in being contrarian,” she says early on. It’s only later that the cracks her facade start to show up.

In a sense, the Borat movies are about a grifter, too, though trying to parse whether Borat or Baron Cohen is the true con artist is the kind of thought experiment that will tie your gray matter in knots. But Bakalova’s performance adds another layer to Baron Cohen’s practical-joking style of comedy. There’s an unselfconsciousness to the men who drool over her, an ego that suggests this woman might actually be into them, coupled with a gleeful cultural mandate to “appreciate” a woman verbally, salaciously, and not cater to a culture that asks them to refrain and treat her with respect.

Unless I missed it, Borat Subsequent Moviefilm never tips into baiting men into decrying the Me Too movement outright. But it’s clear what the filmmakers are implying: In America, those who idolize a certain kind of female aesthetic and feel free to ogle are laughably easy to exploit, whether by grifters, or spies, or social climbers, or just screwball comedians. And if Bakalova, playing a teenager with a mediocre dye job and some lopsided lipstick, can lead various men to embarrassing acts even when they know a camera is around — including an adviser to the president of the United States — that’s a pretty damning thing to capture on moviefilm.

Borat Subsequent Moviefilm: Delivery of Prodigious Bribe to American Regime for Make Benefit Once Glorious Nation of Kazakhstan is streaming on Amazon Prime. White Noise is available to digitally rent on platforms including Apple TV and Google Play; see the website for details.