Jaime Harrison lost in his bid to unseat reactionary South Carolina Senator Lindsey Graham. But his race, like the 2018 campaigns of Stacey Abrams in Georgia and Andrew Gillum in Florida, shows what soon may be politically possible in the Deep South. 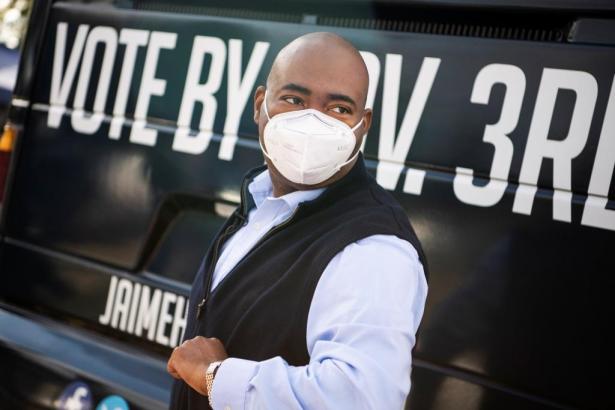 Columbia, S.C.—This was the speech Jaime Harrison didn’t want to give. He rocked back and forth on the small outdoor stage. “We proved that a new South is rising. Tonight only slowed us down,” he told the small crowd of aides and supporters standing on the grass in front of him last night. “But a new South with leaders who reflect the community and serve the interests of everyone will be here soon enough.”

Moral victories have no place in the zero-sum game of electoral politics. But Harrison needed an upside to his Senate-race loss, and he found it in the shifting perception of the South, which was already visible in his candidacy. Harrison’s race was not unlike the 2018 campaigns of Stacey Abrams in Georgia and Andrew Gillum in Florida. He raised tens of millions of dollars in his bid to unseat Senator Lindsey Graham, and, despite a defeat, the national buzz he earned illustrated the changing scope of what Americans believe is politically possible in the South over the next decade.

Like Abrams, he ran a campaign predicated on massive registration of Black voters. He had also hoped to woo white voters who had become disillusioned with Graham, and he exploited Graham’s flip-flopping on supporting President Donald Trump. The guy who called Trump “unfit for office” in 2016 was criticizing others for doing the same a year later, Harrison told audiences across the state. Harrison aimed to show South Carolinians that, despite Graham’s shift, the state had gained little from its senator’s political friendship with the president.

In January, few people thought Harrison had a chance of competing with the three-term senator, let alone outraising him in campaign donations. The Trump administration’s bungled response to the coronavirus crisis made Harrison’s arguments about Graham and the president even more prescient. Nearly 4,000 South Carolinians have died of the virus so far this year. And, as Harrison had no problem highlighting during the campaign, instead of passing a second coronavirus-relief bill, Republicans—led on the Senate Judiciary Committee by Graham—rushed to confirm a conservative Supreme Court justice.

But the pandemic also forced Harrison to pause his aggressive voter-registration efforts. His planned tour across every county in South Carolina moved online in a state where nearly a quarter of rural residents lack minimally acceptable internet speeds. “I’ve waited 28 years to have the resources to hire 150 people to feed like locusts on neighborhood doors,” Trav Robertson, the chair of the South Carolina Democratic Party, told me. But he couldn’t do that. Meanwhile, Republicans had few qualms about such in-person campaigning. They had a plan that they could execute: Rely on the partisan lean of the state and ride Trump’s coattails to victory. Democrats, especially Black Democrats, needed everything to break the right way for success in the South—but first, they needed to believe that the fights here were worth waging. What ultimately became a neck-and-neck race between Harrison and Graham was an important turn in the state’s modern history. Harrison saw his candidacy as a challenge to the sins of the past.

The 1960s in Orangeburg, South Carolina, began with nearly 1,000 students from the local historically Black colleges, Claflin University and South Carolina State University, marching to protest segregation. The police greeted them with fire hoses—and arrested hundreds, including James Clyburn, now the state’s most prominent Democrat. By 1968, Orangeburg showed visible signs of change—schools were desegregating, as were public parks—but Harry Floyd, the owner of All-Star Bowling Alley, nestled in the corner of a shopping plaza a few miles from where Harrison grew up, was resolved that his lanes would remain for white people only.

For years, Black residents in Orangeburg had urged Floyd to integrate the bowling alley; students at the neighboring colleges craved entertainment beyond the movie theater and nightclubs, and a local Black bowling group was tired of driving more than an hour to Columbia to practice. One February evening, John Stroman, a senior at South Carolina State, led a group of students to the lanes to change Floyd’s mind. Police arrested a handful of them that night. Stroman saw a classmate, Emma McClain, being beaten by one officer as two others held her down. Police clubbed another classmate across the back of his head, leaving a gash in his skin.

Theories ran wild among the town’s white residents. They said the protests were the work of “outside agitators”—Black radicals intent on burning Orangeburg to the ground. That Wednesday, a white man who lived near Claflin blasted bird shot at a group of students, wounding them. Then, as night fell on Thursday, February 8, a highway patrolman fired a warning shot at a group of students upset with how the police had been treating them over the preceding days. His fellow patrolmen, unsure of where the shot came from, opened fire on the students, who had turned to run. Some were hit in the back. Others in the leg. One student thought someone was pulling his coat; he later realized it was the tug of bullets piercing his jacket. Three students—Samuel Hammond, Henry Smith, and Delano Middleton, a high schooler—were killed. At least 28 others were injured in the shooting.

Historians often gloss over the Orangeburg massacre; it does not neatly comport with the anti-war protests or the civil-rights battles in other states of the Deep South. But Harrison grew up with that specific history, and hears its echoes in the present. “I’ve lived all my life with these scars, this historical pain that has been passed on from generation to generation to generation,” Harrison said during his final debate with Graham.

The Senate seat Harrison sought was once held by Ben Tillman, a man who defended lynchings on the Senate floor, and by Strom Thurmond, who ran for president on a platform defending segregation. Though Harrison did not claim that Graham was the virulent racist Tillman and Thurmond were, he did not shy away from suggesting that Graham’s worldview was informed by the way they led the state. “This guy is just a relic of the old past,” Harrison told me.

Jesse Jackson predicted Jaime Harrison’s campaign. In 1984, Jackson, then a long-shot candidate for the Democratic presidential nomination, won five statewide primaries. The majority of those victories were in Virginia, Louisiana, Mississippi, and his home state of South Carolina. Four years later, when Jackson again made a bid for the White House, he won three times as many delegates in South Carolina as his nearest competitor, and swept the Deep South.

The South was still the South, though. And Democrats, in the late stages of the “Great White Switch,” when they became members of the Republican Party we recognize today, had begun to cede the region as Republicans swept into power in statehouses and governor’s mansions. The old logic remained that a Black statewide candidate would be walloped by white southerners who would be unwilling to support him in a general election. Then, in 2008, America elected its first Black president. A surge of Black mayors soon won races in major cities across the South.

A decade later, Abrams showed that with the right mix of voter registration, money, and charisma, Georgia and the Deep South were within reach for Democrats. “Theoretically, whoever ran in that cycle was going to have a very, very desirable shot, right, because [Trump] was that bad,” Don Calloway, a Democratic strategist, told me. But without the infrastructure Abrams built to support her candidacy—the hundreds of thousands of voters her organization registered—she would not have come within 55,000 votes of winning the governorship, he said.

Abrams nodded to the influence of her governor’s race when she spoke with my colleague Vann Newkirk in 2018. “My focus is on Georgia, but the reality is, Georgia matters to everyone,” she said. “If you change the leadership of Georgia, you change the South. If you change the South, you change the country.” Even if she was unable to win in Georgia that year (her opponent, Brian Kemp, then the secretary of state, refused to recuse himself from overseeing the election, which was dogged by accusations of voter suppression), she changed the way people viewed the path to victory there. “It just goes to show you that maybe we should go out and recruit more African American candidates, because they can articulate something and bring an energy and bring a focus that is unique,” Harrison told me.

The South, and the Deep South in particular, fielded more Black candidates in 2020 than it has since Reconstruction. This year was the manifestation of Abrams’s efforts, and those of southern Black activists and politicians before her, like Fannie Lou Hamer. On Sunday, at a rally in Charleston along the banks of the Ashley River, Harrison reflected on the moment. “We are on the verge of having this great state being represented by two African American senators at the same time. First time that’s ever happened in this country,” he told me. He allowed himself to hope; his campaign, as he’d repeat at stop after stop, allowed people in the state to hope. “And that’s the progress that we have made.”

Harrison will not be the next United States senator from South Carolina. But his campaign allowed Democrats to imagine what was possible in his home state; it reminded national leaders why they should not write off the region. If Democrats had invested in South Carolina—in the same way they invested in Georgia, for Abrams’s gubernatorial race and the 2020 election—might the result have been different? Using the voter list Harrison has assembled, will Democrats be competitive in the state moving forward? Abrams turned an unsuccessful gubernatorial bid into sustained influence within the Democratic Party. She made former Vice President Joe Biden’s shortlist for potential vice-presidential nominees. Harrison, who already had high name recognition among Democrats, now has a bona fide national profile.

The South can change. In September, leaders of a nonprofit in Orangeburg announced that the bowling alley where the Orangeburg Massacre began will be transformed into a civil-rights center. Harrison wound his concession speech to a close with an altar call. “We welcome anyone willing,” he said, “to help us write the story of the new South.”

[Adam Harris is a staff writer at The Atlantic.]