My generation of first-time voters understands what’s at stake because we recognized the toll it took on our community. We saw injustices occur in our backyards and now we’re leading the movement for justice, for progressive social change. 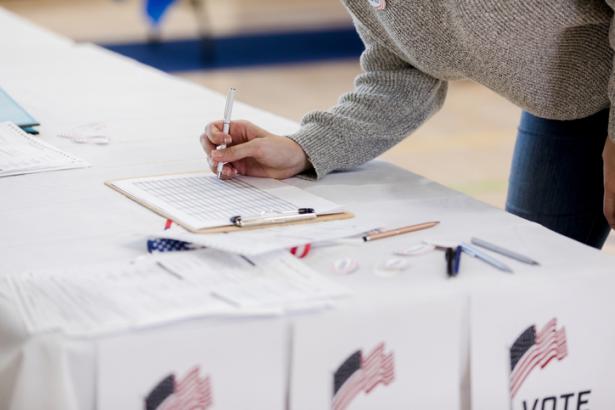 When I was in the second grade, my best friend’s dad, an undocumented immigrant, was picked up by ICE as we headed home after a long day of school. Ironically, I recall learning about the Founding Fathers that day, yet the American values we were taught and the Pledge of Allegiance we were told to recite in class every morning didn’t seem to align with the so-called democracy we experienced in our lives. This was in 2007, when Donald Trump was still playing a successful businessman on TV. I grew up in Arizona, where we were living in Trump’s America long before he was ever in office.

I’m a 20-year-old woman of color of Guatemalan and Mexican descent, and I grew up in Joe Arpaio’s Arizona. Under the former “Sheriff of the Southwest,” state-sanctioned violence, fear-mongering policies, separation of families, mass deportations, and voter suppression were the norm. Nine years after my friend’s dad was taken, when my community heard the news of Trump’s nomination, we knew what America was facing. We knew that if he could, Trump would turn America more into Arizona. After serving 24 years as the 36th sheriff of Maricopa County, the fourth largest in the country, Arpaio was voted out of office in 2016. Since then, people-powered organizing has been able to recognize its potential to remove hate from office and has been picking up the pieces while trying to make our state a better place.

Though it often goes unnoticed in the national political conversation, Arizona has a voter suppression problem. At the start of 2020, I joined other local voting rights organizers at the Arizona State Capitol to sit in during Senate Judiciary Committee hearings multiple times a week. Under a Republican majority, our presence was vital in the fight against voter suppression to defend and protect our communities from bills that would contribute to their disenfranchisement. These bills would have prevented our community from exercising their right to vote in the 2020 election through fear-based and voter intimidation tactics. They even included an attempt to return a version of Senate Bill 1070, Arpaio’s notorious racial profiling and the nation’s strictest anti–illegal immigration law that targeted predominately Latinx communities across the state.

Due to the monumental efforts of community organizers, Arizona just might turn blue. The Biden and Harris ticket just might win. There’s so much hope and possibilities for the future, but one factor that must remain the same is a need for the people to be uplifted, heard, and given more than a few seats at the table—seats that are actually representative of the population we serve and keep the interests of our BIPOC communities in mind.

For nearly my entire childhood, I recall my parents and others within our BIPOC community in Arizona suggesting they did not believe in voting, nor did they recognize the importance of it. In the aftermath of Trump’s nomination, my parents were much more open to the idea of voting and its relevance despite their preconceived notions and general distrust towards the government. My involvement in the movement motivated and educated my parents to become further involved, but that’s not every family household’s reality. These potential voters must be reached, and the organizing must continue to occur beyond the presidential election.

My generation of first-time voters understands what’s at stake because we recognized the toll it took on our community. We saw injustices occur in our backyards and now we’re leading the movement for justice, for positive and progressive social change. Our families were torn apart. My community was hurting, and here I am, voting for change along with other young people in Arizona and in BIPOC communities across the nation. We are what Arizona looks like. We are the progressive organizers, people-powered movement builders Arizona and this nation needs.

Together, we’re taking vital steps in the right direction, towards a true democracy, by taking our power to the ballot box.

Advocating for Arizona has been one of my greatest privileges and as a young person of color, I urge my peers, neighbors, and all Arizonans to get engaged in the movement, too. Now’s the time to not only get out the vote but to ensure we are ready to hold the powerful accountable, challenge authority, and remain civically engaged, especially after the election. We have come too far, we have made tremendous progress, and it would be a significant loss for our diverse communities and for the people-powered movement building we have obtained to go ignored. That’s why we need every eligible voter to turn out at the ballot box like the future of Arizona and our lives depend on our votes—because it does.

For young people and people of color in particular, we must all do our part to get out the vote and engage those within our communities who have historically been left out of the political process. We know what will happen to Arizona if we choose to stand on the sidelines; we’ve been living in “Arpaio’s Arizona” and in Trump’s America for years, experienced injustice firsthand, and we cannot afford to put our community at risk. Now is the time to take action and vote before it’s too late.

Irene Franco Rubio is a social justice activist and catalyst for change, born and raised in Phoenix, Arizona. She has devoted her efforts to advocating for BIPOC communities through digital community organizing, intersectional movement building, and writing to uplift diverse voices. Irene is a young woman of color of Guatemalan and Mexican descent devoted to the movement for social change as an activist, writer, organizer, and change-maker.