The People Will Govern

The people who braved intimidation, violence and COVID-19 infections, cast their votes for a different future. 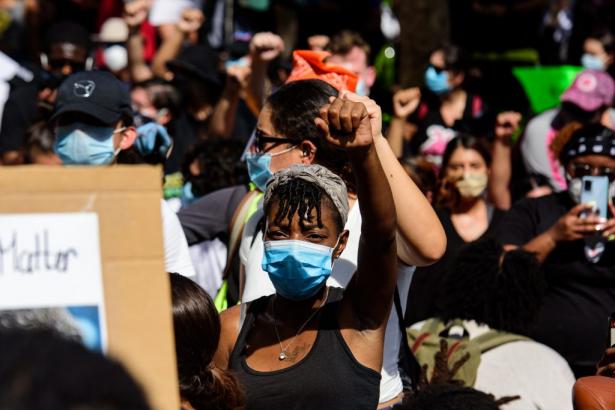 In most times, but especially in these times, Audre Lorde’s “Litany for Survival” is a balm that soothes our restless and aching hearts. For those of us “who were never meant to survive” this extended nightmare of a regime, one that is so much more competent at grifting, unleashing violence, and caging children than growing the economy or stopping a pandemic that threatens the health and well-being of millions – could this moment be “a now that can breeds futures”?

However the final counts turn out for the 2020 elections, the people who braved intimidation, violence and COVID-19 infections, casting their votes for a different future – by mail or in person, early or on the day of – for many of those people, getting “their man” in office seemed less material than sending a clear rebuke against a sociopathic tyrant who would risk the well-being of  his own supporters so that he may cling onto power. The counting of votes is far from over and must continue until all votes are counted; yet, as we await the final accounting, there are several things we already learned from yesterday’s voting:

Then again, perhaps we already know the important answers even before a single vote was cast. We knew or should have known that just as the economic recovery from the Great Recession largely left poor people behind, especially Black people, the COVID-19 pandemic disproportionately harmed poor people, especially Native Americans and African Americans. We knew or should have known that the same pandemic that left tens of millions out of work, especially women, also enriched the world’s billionaires to the tune of more than $2.5 trillion (yes, trillion with a “t”!), so that 2,189 billionaires now have more than $10.2 trillion in private wealth, while millions more are pushed into extreme poverty. We knew or should have known the day Ruth Bader Ginsburg died that the Republican Party would install a rabidly reactionary judge to secure permanent power for a minority party whose fortunes relies more on administrative shenanigans and judicial mischiefs than their policies, which are increasingly more repugnant abroad and out of step with the public at home. We knew and should have known that in a system when police killed and were not held accountable that Breonna Taylor and countless people like her will only get justice when we Say Their Names, and demand and bend the arc of justice toward the people and not the state.

Finally, we know or should have known that when a country’s police and military permit white supremacists among their ranks or when co-founders of media outlet who also organize white supremacist formations or provide a home for virulent and hateful messaging, far from being a post-racialist society, fascist politics and policies thrive as we learn to embrace authoritarians and tyrants, while sanctioning armed neo-nazis, neo-confederates and general white supremacist as they stage campaigns of intimidation and terror against voters and non-voters alike. Indeed, by the time the corporate press expressed outrage at a sitting U.S. Senator for tweeting “we’re not a democracy,” the preference for elitist governance, especially of the white supremacist variety has been clear for everyone to see – at least since 2010 when the Supreme Court ruled against the people in Citizens United.

The privileging of property over human beings is not new nor is the general antidemocratic bias against the majority. After all, the founders of this country was so distrusting of the many (i.e. we, the people) that they drafted a document in which they excluded nearly 85% of the inhabitants of the land from civil rights and liberties that men like themselves aspired to enjoy.

True to form, the many hadn’t stopped dreaming or fighting for a future where they, not the elite, would govern. In the face of such hostility, contempt and armed forces, tens of millions of people, especially young people of color under the leadership and inspirations of Black people (many of whom are queer Black women), took the street, pushed back, and demanded a simple acknowledgement and urgent action – that Black Lives Matter! Instead of guns, they linked arms; in the face of brutality, they showed love and joy; and while encountering exclusions, they build formations and communities for sheltering against virulent anti-black violence, wealth hoarding, hetero-patriarchy and white supremacy. In this fascist moment and against white supremacist insurgencies, fittingly and courageously they demand that we, as a society, defund the police, and abolish prisons.

With or without their electors, these protestors are on the move. The rest of us should follow and get ready to work because the many intractable problems demand solutions. Yuri Kochiyama, a life-long community activist who excelled at cross-generational organizing, understood that “the youth are our future.” So, after six months of consecutive protests in more than 2000 cities and towns throughout the U.S. (not to mention thousands more across the globe), for these protestors, this moment is a long time coming. They should know, they authorized it. For them, this is a now that breeds a future, where we, the people, will govern.

H. L. T. Quan is the Editor in Residence for the PraxisCenter Blog, and a political theorist and filmmaker. She teaches justice studies in the School of Social Transformation at Arizona State University. Her work includes Cedric J. Robinson: On Racial Capitalism, Black Internationalism, and Cultures of Resistance; Growth Against Democracy: Savage Developmentalism in the Modern World, and Mountains That Take Wing/Angela Davis & Yuri Kochiyama: A Conversation on Life, Struggles & Liberation. Quan is working on, Against Tyranny, a monograph about tools for democratic living.