A Memo to the GOP, Wall Street, Joe Biden, and All Democrats: 'No, Mitch McConnell Is Not the 46th President'

"President Biden will be under no obligation to hand Mitch McConnell the keys to his Cabinet," progressive groups argue. 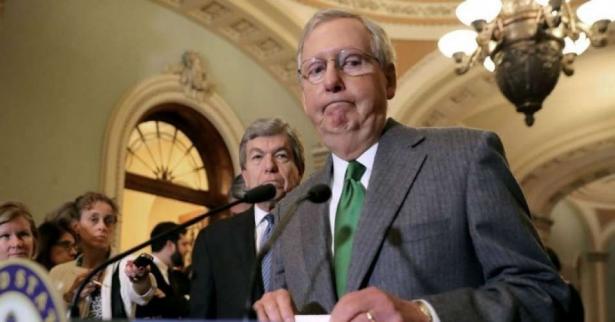 A President-elect Joe Biden, warn progressives, must not allow Sen. Mitch McConnell, if he remains Majority Leader, any "veto power over how he constructs his administration." , Photo: Chip Somodevilla/Getty Images

A pair of progressive advocacy groups is pushing back hard against an emerging narrative that President-elect Joe Biden—declared the projected winner of the 2020 presidential race on Saturday—should submit in any way to the authority of Senator Majority Leader Mitch McConnell, assuming Republicans retain control of the Senate, when it comes to picking a cabinet or setting legislative priorities heading into 2021.

In a detailed joint memo (pdf) issued Friday that followed reporting from news outlets, including Axios, that suggested that Biden will be forced to accommodate McConnell as he selects top appointments during the transition period and upon taking office in January, government watchdog groups Demand Progress and the Revolving Door Project argued that this would be a deeply misguided direction to go—one that would have disastrous consequences for the new administration and the Democratic Party as a whole.

"Wall Street and Mitch McConnell are arguing that Biden needs to defer to McConnell in order to build out his administration," tweeted David Segal, executive director of Demand Progress on Friday. "This narrative is WRONG."

According to the memo (emphasis in the original):

A false narrative, undergirded by self interest and misguided assumptions, is dominating early transition coverage. Key voices are already insisting that Joe Biden's presidency will fail to deliver on any of its promises. According to this view, with Mitch McConnell in the Senate, Biden will not only be impelled to abandon his legislative vision, but also any hope of delivering for the American people via his power over the executive branch. They say that to wrest confirmations from McConnell's hands, Biden will have no choice but to appoint moderates who will not rock the boat.

Over 80 million voters will have cast their ballots for change. A reversion to a business-as-usual centrism that enjoys no such mandate, at the behest of a Senate majority representing a minority of the country's citizens, would be a betrayal. President Biden will be under no obligation to hand Mitch McConnell the keys to his Cabinet.

In the wake of the 2008 financial crisis, McConnell defiantly and proudly asserted that he would "make Obama a one-term President" by blocking a meaningful federal response. The insufficiency of the federal response led to a midterm bloodbath for Democrats. Biden must not allow McConnell veto power over how he constructs his administration.

On Sunday, the Associated Press reported that Biden will seek "to move quickly and build out his administration," with an initial focus on developing a coronavirus task force as a key part of the transition and then establish other agency efforts as well. But Max Moran, a research assistant for the Revolving Door Project, explained in The American Prospect that it's important for Democrats to understand that they don't "have to live in Mitch McConnell's world" any longer:

Biden himself may be an institutionalist, but he is first and foremost the future president and current leader of the Democratic Party. His duty as president is to shepherd the country though a deadly pandemic and an economic calamity comparable only to the Great Depression. His duty as Democratic leader is to keep his party from losing power in 2022, and keep himself or his successor from losing the presidency in 2024.

There is no way to accomplish either of these tasks while kowtowing to Mitch McConnell. It is an apocalyptic delusion to think McConnell will be reasonable if only Biden nominates centrist corporatists to his Cabinet—that was the same logic behind nominating Merrick Garland, and his name is now a verb[...] If Biden worries about passing nominees through the Senate, God help us for any hope of passing legislation, no matter how moderate and feeble. If, by 2024, the Democratic Party's only argument for re-election is "well, we tried to make a few tweaks to Obamacare, but darn it, McConnell behaved in exactly the way everyone already knew he would," this country is doomed to fascism.

The memo from Revolving Door and Demand Progress says that even if McConnell holds the majority—as of this writing, especially with two runoff elections for both of Georgia's Senate  seats to be held in January, that remains up in the air—Biden will have tools at his disposal to push through progressive cabinet members. According to the groups:

"Failure to use these powers, however, will spell political doom," the memo asserts, and warns: "If Biden fails to use the powers available to him, Democrats up and down the ballot will suffer for it in 2022 and beyond."

We will not allow Mitch McConnell to rob this beautiful American majority from governing.

We will not allow minority rule.

Throughout the general election, progressives have called on Biden to make sure his cabinet choices and top advisors represent the will of the party's base that delivered him victory against Trump, not the many corporate interests that gave generously to both campaigns. As journalist and activist Kate Aronoff put it Saturday night as celebrations over Biden's victory spread nationwide:

Writing for Jacobin on Sunday, Matt McManus, a visiting professor of politics at Whitman College, argued that the hard work for progressive movement and Democratic Party will be shaping and enacting policies that get at the root of the conditions that gave rise to Trump—one of the many political observers warning that Democrats simply cannot afford to go back to "the way things were" before Trump.

"After the celebrating is done—and make no mistake, we should spend the weekend celebrating," wrote McManus, "we must recognize that the material and cultural conditions that abetted the rise of Trumpism (a variant of what I've called "postmodern conservatism") haven't gone away. If anything, Trump ensured that they've gotten worse."

"Our task over the next four years," he writes, "will be to push a politics that ensures Trumpism is dead and buried."

To accomplish such a task, former national co-chair of the 2020 Bernie Sanders campaign Nina Turner argued in a Washington Post op-ed Sunday, that the Biden administration and Democrats are going to have to get real about delivering far-reaching and tangible results that improve the conditions for working people, struggling communities, and a planet under threat. According to Turner:

That means passing a Green New Deal to lift our economy out of recession, create millions of jobs and address the climate crisis head-on. It means passing Medicare-for-all to prevent thousands of Americans from dying (or going bankrupt) due to covid-19 and other illnesses. It means making the wealthy pay their share of taxes and reversing the massive tax giveaway that was Trump’s crowning legislative achievement. And it means electoral reform to ensure our government actually reflects the will of the majority.

Biden and congressional Democrats led by Chuck Schumer and Nancy Pelosi, argued Turner, "now have an opportunity to win a generation's long-term loyalty, but only if they deliver the big changes young Americans demand."

Because of people like you, another world is possible. There are many battles to be won, but we will battle them together—all of us. Common Dreams is not your normal news site. We don't survive on clicks. We don't want advertising dollars. We want the world to be a better place. But we can't do it alone. It doesn't work that way. We need you. If you can help today—because every gift of every size matters—please do. Without Your Support We Simply Don't Exist.  Please select a payment method: CARD  PAYPAL ACTBLUE