labor UNITE HERE, Union That Knocked On Doors of 3 Million Voters—Including 575,000 in Philadelphia—Celebrates Victory for Biden/Harris 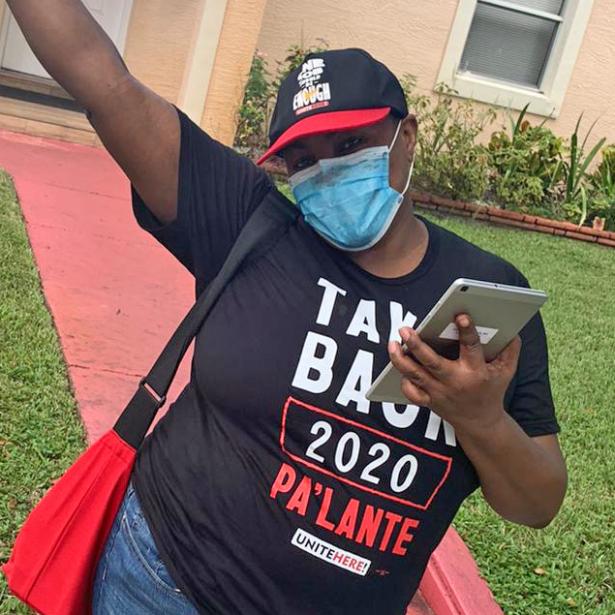 UNITE HERE, union that knocked on doors of 3 million voters—including 575,000 in Philadelphia—celebrates victory for Biden/Harris

“The key takeaway from this election is that workers saved our democracy.”

NATIONWIDE—UNITE HERE, the hospitality workers’ union, organized the country’s largest union-door-to-door canvassing operation, paving the way to a clear path to victory for Joe Biden. In Pennsylvania, the state that clinched victory for the democratic candidates, UNITE HERE canvassers knocked on the doors of 575,000 voters. These mostly Black and Brown workers made the critical difference in defeating Trump in Pennsylvania.

“I’m incredibly proud of UNITE HERE and our members,” said UNITE HERE International President D. Taylor, “It was clear that we needed to take back our country, and even more clear how to do it: through face-to-face conversations and the type of in-person organizing that our union does best. With Take Back 2020 we built a program that made a critical difference in Pennsylvania, Nevada, and Arizona, and we thank the other labor unions, progressive allies, and individual donors that worked with us to accomplish that goal.”

UNITE HERE has been preparing for the 2020 election since 2016, identifying several areas for targeted door-to-door outreach. Among them were cities now critical to the outcome of the current race: Las Vegas and Reno, Nevada; Phoenix, Arizona; and Philadelphia, Pennsylvania. In those key areas, UNITE HERE canvassers got out on the doors first, starting a ground game as early as July in Nevada and Arizona to turn out voters who did not cast ballots in 2016. In Philadelphia, the operation began October 1 and grew dramatically from 50 to 500 canvassers over five short weeks.

“This is what we do as a union—we organize. The members I work with are primarily Black and Brown leaders who need to see a change in this country,” said Nicole Hunt, President of UNITE HERE Local 634 in Philadelphia, “They had lost hope in the system so they did not vote last election, and they may not have this year either. But we went to them to help them find their voice, to let them know their vote matters. We’re proud of the work we have done, and we are proud to have taken our country back.”

As part of UNITE HERE’s Take Back 2020 campaign, 1,700 canvassers—many of them Black and Latinx union members whose jobs and families were hit hard by COVID-19—knocked on the doors of three million Americans in Nevada, Arizona, Pennsylvania, and Florida to encourage them to vote. These efforts helped drive the unprecedented turnout of this presidential election and will make the critical difference that wins the presidency for Joe Biden.

“We believe we made a critical difference in Pennsylvania by focusing our efforts in the disenfranchised Black and Brown communities where most of our members live. Four years ago, when a hotel owner won the State of Pennsylvania and the White House, we pledged to do whatever was needed to take back our country. And despite a pandemic that has devastated our industries and our communities, we did just that. That is a testament to how our union brings together those from all walks of life to harness our collective power and win for all working people.”

“The Culinary Union is proud to have mobilized tens of thousands of hospitality workers and voters to elect representatives who will fight for our families. Because of the efforts of the largest political team comprised of 500 UNITE HERE and Culinary Union canvassers on the ground statewide who knocked on 500,000 doors. The unprecedented turnout in Nevada, which was led by those most directly impacted by the COVID-19 pandemic, is a mandate on Donald Trump’s failed leadership. Ever since he assumed the office, Trump has been a daily threat to the livelihoods of workers and our families. We are taking back our country and delivering Nevada for political candidates who will represent working families and fight for our issues. Nevadans need comprehensive COVID-19 relief now, a fair economy that centers workers, racial justice that ensures Black Lives Matter, and a democracy that includes all of us – whether we are Black or white, Native or new immigrant, Latinx or Asian.”

“UNITE HERE Local 11 has been running political campaigns in Arizona since 2007. During this pandemic, this cycle has been no exception. We knocked on 800,000 doors, made 2.5 million calls, and talked to 250,000 Arizonans. More important than any demographic changes, it is the face-to-face conversations with voters that has made Arizona turn blue in 2020.”

“The key takeaway from this election is that workers saved our democracy – workers did the essential door-to-door canvassing and everyday working voters turned out; with their votes comes a mandate for change to help working and low-wealth people,” said UNITE HERE Secretary-Treasurer and acting Political Campaigns Director Gwen Mills, “We expect the administration to provide economic relief for workers left jobless by COVID-19 and to support workers to join unions. Protecting access to quality health care, implementing structural change for racial equity and immigration reform, and ensuring workers are at the center of the economic transition necessary for climate change are the key issues. UNITE HERE is proud to have made a critical difference in this election so that agenda can move forward.”

UNITE HERE is a labor union with over 300,000 members working in the North American hospitality industry. Over 75% of its members are still out of work as a result of the COVID-19 pandemic, down from a peak of 98%. UNITE HERE is operating the largest union door-to-door canvassing operation in the United States, including the largest overall door-to-door canvassing operations in Nevada, Arizona, Florida, and Pennsylvania.