Israel lobby groups are once again attempting to manipulate public education in California in order to censor Palestinian and Arab scholarship, under the guise of fighting anti-Semitism. 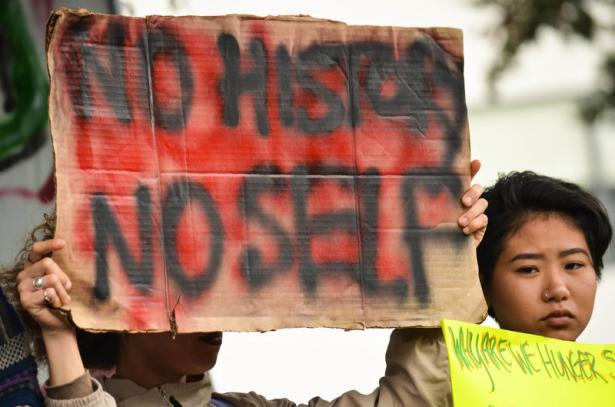 The battle is being waged around the state’s ethnic studies curricula.

“We can’t underestimate our opposition and the coalescing of right-wing organizations coming together against ethnic studies,” Lara Kiswani of the Arab Resource and Organizing Center told The Electronic Intifada.

Hers is one of many groups organizing to fight back.

Pro-Israel groups are agitated over the state’s decision to reinstate Arab American Studies in the proposed ethnic studies model curriculum, after they pressured the California Department of Education to remove it altogether.

The curriculum must be approved by the State Board of Education next year.

Since the planning stages of the model curriculum, dozens of Israel lobby groups have tried either to change its parameters to shield Israel from criticism or kill it entirely.

Newsom did veto the bill – a decision that had been unexpected.

Bill AB331 had already been watered down to include so-called “guardrails” that conflate anti-Jewish bigotry with criticism of Israel.

The Amcha Initiative – an Israel advocacy organization that spies on students and whose leaders smear Palestinian rights supporters as anti-Semites – is leading a new campaign targeting the California State University (CSU) system over its ethnic studies graduation requirement.

The governor signed the CSU requirement into law in August.

But Israel lobby organizations aren’t just pressuring California lawmakers to adopt anti-Palestinian policies from the outside.

It was recently announced that the Simon Wiesenthal Center is partnering with the state’s public education superintendent, Tony Thurmond, to design an “Education to End Hate” initiative.

This is being touted as a way to “combat all forms of hate, bias and bigotry” in California public schools.

It is also marketed as a response to President Donald Trump’s denunciation of critical race theory and a planned executive order calling for “patriotic” education that whitewashes slavery.

The Simon Wiesenthal Center and its Museum of Tolerance say they were asked by the state to “offer signature training to schools who will then use this for countering anti-Semitism in California.”

Grassroots activists and educators see this as an underhanded attempt to assimilate Israeli propaganda into public education under the guise of an anti-racist curriculum.

A year ago, anti-Palestinian organizations – including the Simon Wiesenthal Center – attacked the state’s education department over an initial draft of the ethnic studies model curriculum.

The curriculum was sidelined in August 2019 after Israel advocacy groups complained that the guidelines omit discussions of anti-Semitism.

Organizations including StandWithUs and the Jewish Legislative Caucus, a grouping of state lawmakers that serves as an in-house Israel lobby, claimed that the curriculum “singles out Israel for criticism” and “would institutionalize” anti-Semitic stereotypes in public schools.

The Simon Wiesenthal Center condemned the model curriculum at the time and offered to help revise it.

The Simon Wiesenthal Center has previously worked with US lawmakers and University of California governors to draft policy and legislation intended to shield Israel from criticism.

Like other lobby groups, the Simon Wiesenthal Center conflates anti-Jewish bigotry with legitimate criticism of Israel and its racist state ideology, Zionism, and works to shut down almost any discussion of Palestinian rights and history.

Part of the struggle

This comes as state and federal lawmakers are formally adopting the International Holocaust Remembrance Alliance’s (IHRA) definition of anti-Semitism.

This definition, supported by Israel and its lobby, explicitly conflates criticism of Israel with anti-Jewish bigotry.

In 2019, Donald Trump issued an executive order adopting the definition and boosting the aims of Israel lobby groups who claim that Palestine rights advocacy is anti-Semitic.

Montaño, who teaches at California State University at Northridge, is also a member of the Save Arab American Studies coalition and was on the original advisory committee for the ethnic studies model curriculum.

This is part of a longstanding struggle to implement and protect the “anti-racist and anti-colonial core” of ethnic studies, a field born from student protests in California 50 years ago, Montaño said.

The amendments to AB331 were not in response to communities of color who had been fighting for ethnic studies. Rather, they were “the result of caving in to Israel lobby groups,” Montaño said.

“For someone who had been fighting for this for so long, it was gut-wrenching.”

It was clear that these groups were only committed to silencing the Palestinian voices, no matter what or who they had to sacrifice, Montaño added.

“If you are a civil rights organization whose work is centered on the interests of communities of color [and] to challenging systemic racism, you don’t enter a struggle for ethnic studies from a standpoint of ‘what’s in it for me,’” she said.

“Many elected officials in California pride themselves for the ways they are standing up for what’s right in Trump’s America,”the Save Arab American Studies Coalition said.

The coalition wants the state and lawmakers to retain that pride by standing up for ethnic studies.

The Arab Resource and Organizing Center has been at the forefront of community-based advocacy for the inclusion of Arab American and Pacific Islander Studies in the model curriculum.

“It’s a moment for us to demand more, to expect more and to be hopeful because there is too much at stake,” AROC’s Lara Kiswani said.

“The more beautiful side of this story is that the attack on this curriculum has brought to the surface how united we are as communities who have the most to lose and the most to gain from this fight,” Kiswani added.

Even though educators have been galvanized by this struggle, Montaño implored parents of public school students to pay attention to their local school boards and be ready to stand with teachers who don’t capitulate to Israel lobby demands.

School boards “will be next in terms of these lobby efforts,” she warned.

“We need to make sure that they remain faithful to the voices of their teachers and to ethnic studies.”

Nora Barrows-Friedman is an associate editor of The Electronic Intifada.