“There is no question that the old monopoly of the two political parties that have dominated Puerto Rican politics for decades is coming to an end, and that’s a very good thing,” says historian Rafael Bernabe 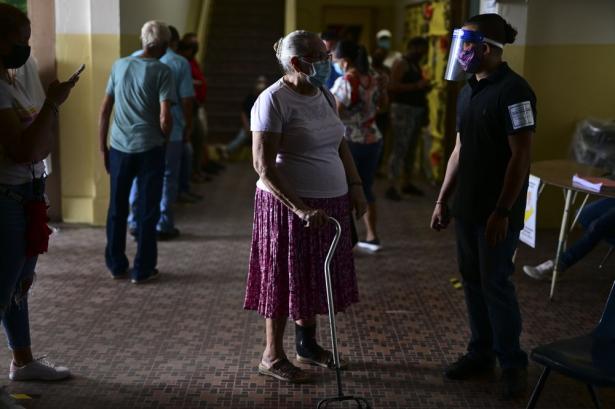 People wait in line to vote during the general election at a voting center set up at the Manuel Gaetan Barbosa School in San Juan, Puerto Rico, Tuesday, Nov. 3, 2020. In addition to electing a governor, Puerto Ricans are voting in a non-binding referendum, AP Photo/Carlos Giusti

We look at election results in Puerto Rico, where progressives have made historic inroads against the two traditional parties, the Popular Democratic Party and the New Progressive Party. “There is no question that the old monopoly of the two political parties that have dominated Puerto Rican politics for decades is coming to an end, and that’s a very good thing,” says historian Rafael Bernabe, who was just elected to the Puerto Rico Senate as part of the Citizens’ Victory Movement.

AMY GOODMAN: This is Democracy Now! I’m Amy Goodman, with Juan González. This is The Quarantine Report, as we turn to Puerto Rico, where where election authorities have discovered around 126 briefcases with hundreds of uncounted ballots from last week’s election. It remains unclear what impact the ballots could have on the election results.

We go now to San Juan to speak with the historian Rafael Bernabe, who was just elected to the Puerto Rican Senate as a member of the Citizens’ Victory Movement. He’s co-written several books, including Puerto Rico in the American Century: A History Since 1898 and Puerto Rico: Crisis and Alternatives.

Congratulations on your victory. Can you talk about the significance, Rafael Bernabe, of your win and also the other people in the Puerto Rican Legislature, which look like you’re really going to be turning it around?

SEN.-ELECT RAFAEL BERNABE: Yes. One of the main — first of all, good morning, and very happy to be here with you. One of the main differences, one of the main events, main aspects of these elections in Puerto Rico, is the fact that two progressive forces did very well in the election. As you mentioned, the governor, Pierluisi, won with a mere — he barely got 33% of the vote. The Puerto Rico Independence Party got around 15% of the vote. And the movement I belong to, which is the Movimiento Victoria Ciudadana, got also around 15% of the vote. That means that the progressive-left forces got around 30% of the vote, which is almost as much as the person who won the governorship got. So, we have a very significant increase in the electoral support for movements which are linked to the labor movement, to the women’s movement, to the environmental movement.

In our case, we elected at least four legislators: two representatives and two senators. And we are still in the fight, in the struggle. We think we may have another representative elected. The Puerto Rico Independence Party elected two legislators: one representative and one senator. So, this is a minority, but a significant force in the Puerto Rico Legislature, which is going to be fighting against the austerity policies that we have been suffering in Puerto Rico for the longest time, against the anti-labor policies and anti-environmental policies that the Puerto Rican governments have been imposing on us, again, for many decades now. So, it’s a very encouraging result for progressive forces in Puerto Rico, the results of these last elections.

JUAN GONZÁLEZ: And, Rafael Bernabe, one of the key things, as you mentioned, is that the voters seem to be turning away from the monopoly of the two-party systems, of the statehood party and the commonwealth party, not only in terms of voting for alternative candidates, but also for staying home. This was an all-time low in turnout among Puerto Rican voters. Barely 50% of the electorate voted, whereas in the past it’s been 80, 85%. What happened there in terms of all the people who decided just to stay home?

SEN.-ELECT RAFAEL BERNABE: Yeah, well, as you mention, there are two dimensions to this. On the one hand, as you mentioned, the vote for the two historically dominant parties in Puerto Rico keeps going down. The party that won the elections this time got barely 33% of the vote. The other historically dominant party, the Partido Popular, got around 31% of the vote. As I said, this is a new low for these parties. It’s the result of the very deep economic crisis that we have been undergoing, and people turning away from these parties that have not been able to provide any alternative to the situation in which Puerto Rico finds itself.

And at the same time there are many people who are completely dissatisfied with these two parties, they are not yet convinced of voting for a pro-independence party or for a progressive-left, left-wing force, such as Victoria Ciudadana. But they are already unwilling to vote for the parties that they historically voted for. We have many statehood — supporters of statehood who did not go to vote for the PNP. They would normally have gone to vote for the PNP; they didn’t go to vote. They didn’t vote for the Partido Popular, either. They didn’t vote for Victoria Ciudadana or the PIP, either. But they stayed home, because they were so disgusted with the policies of the parties that they have historically supported, that they preferred not to vote.

But as I said, there’s no question that many people protested against the existing — the two parties that have historically dominated Puerto Rican politics by voting for the alternatives of the Partido Independentista and Victoria Ciudadana, and there were others who just stayed home. But regardless of the way they expressed their protest, there is no question that the old monopoly of the two political parties that have dominated Puerto Rican politics for decades is coming to an end. And that’s a very good thing.

JUAN GONZÁLEZ: And I wanted to ask you about the other aspect of the election. There was also a referendum on status, which only gave the voters a choice between the current status or statehood. You are known as an independentista. And I’m wondering what you would say to those in the United States, especially in the Democratic Party and some so-called progressives, who really want to support statehood for Puerto Rico, because they think it would help change the balance of power in the U.S. Senate and in Congress. What would you say to those folks who say it’s a good thing for Puerto Rico to become a state?

I think the plebiscite that was just held is an indication — let me say, the objective of this plebiscite, by the proponents and the people who approved it, the present administration of the New Progressive Party — the objective of the plebiscite was to obtain a very strong, very clear, very forceful mandate for statehood in Puerto Rico. And they failed to get that. They got 52% of the vote for statehood, and that means that 48% of the people who voted voted against statehood. So, it should be clear that there is not such a thing as a forceful, strong mandate or demand for statehood in Puerto Rico.

AMY GOODMAN: Rafael Bernabe, I wanted to turn to someone who also won, as you did, the Afro-Puerto Rican human rights feminist and LGBTQI activist Ana Irma Rivera Lassén, who was elected to the Puerto Rican Senate. She spoke to Democracy Now! last week about her historic win.

SEN.-ELECT ANA IRMA RIVERA LASSÉN: [translated] I’ve received messages of joy from many people, women, Afro-descendants, LGBTQI people, people from many communities in Puerto Rico, who are conscious of making a Puerto Rico that is more inclusive, a Puerto Rico that represents all of us, and in the building of a more inclusive country, push for sustainable economic development, search for a solution on our status as a U.S. colony, be a country that is not just divided on what our status should be, but a country that focuses on the inclusion to defend people’s human rights and the basic necessities for our people that the Puerto Rican government must respect and guarantee. We have to approach this through a lens of inclusion.

AMY GOODMAN: That’s Ana Irma Rivera Lassén, the first lesbian woman of African descent — the first openly lesbian woman of African descent to be elected to the Puerto Rican Legislature. She joins with you and María de Lourdes Santiago of the Independence Party in what people are calling, to what we know in the United States, is similar to The Squad. And if you can talk about what this means for the people of Puerto Rico, all of your elections?

SEN.-ELECT RAFAEL BERNABE: Yeah, absolutely. Ana Irma Rivera Lassén, she’s the president of the Movimiento Victoria Ciudadana, I should add. And she was a candidate for the Senate. She is a pioneer fighter for women’s rights, for gay and lesbian rights, for the struggle against racism in Puerto Rico. She’s a former president of the Puerto Rico Bar Association. So, she’s a very significant figure in the Puerto Rican public sphere as a defender of human rights, as a defender of democratic rights.

I think, as I said, that we have a new minority, but a very significant minority, in the Legislature, which is going to be fighting for women’s rights, for workers’ rights, for environmental protection, fighting the policies that are being imposed on us by the federally appointed federal control board. And so, as I said, the tremendous increase in the vote for the Puerto Rico Independence Party, which went from around 3% of the vote to 15% of the vote, the vote that we got, which is, again, at around 15% of the vote, that means that we represent a force which is about a third — a third of the electorate voted for the Puerto Rican Independence Party and the Movimiento Victoria Ciudadana. So, this is a tremendous jump for progressive forces in Puerto Rico in electoral terms. Given the —

AMY GOODMAN: Rafael Bernabe, I want to say thank you so much for being with us. Yes, we know you as a professor, a sociologist, historian and politician, leading voice of the left in Puerto Rico, now as a Puerto Rican state senator, running as a member of, in English, the Citizens’ Victory Movement. And we’ll continue to follow what you do in the Legislature.

Rafael Bernabe is a sociologist and historian who was just elected to the Senate in Puerto Rico, running as a member of the Citizens’ Victory Movement.

Your support is vital to sustain and grow Democracy Now! Please donate today!