Trumpism Can’t Be Voted Away. We Need Radical Social Transformation.

We have to offer people an entry point into a radically democratic process of social transformation grounded in process and principles. 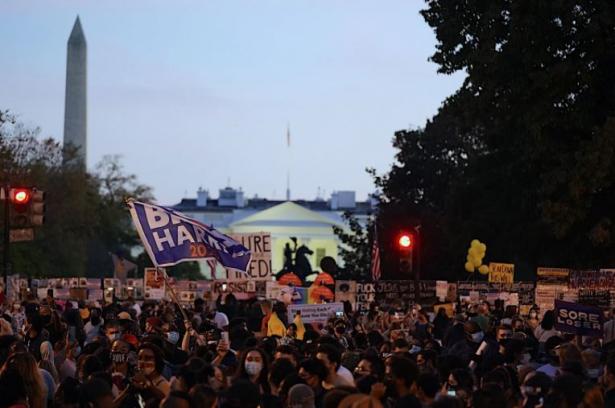 Even as votes are still being counted, a chorus of pundits and politicos have begun attacking the left for allegedly scaring people away from the Democratic Party, jeopardizing Biden’s victory and weakening down-ballot races. Nothing could be further from the truth.

Many Democratic candidates had lackluster showings, because they were, in many cases, lackluster candidates, offering nothing new or hopeful. In contrast, bold and forward-thinking progressives, like Cori Bush from St. Louis and Jamaal Bowman from New York, did quite well against the odds.

The Democratic establishment’s failure to acknowledge its role in suppressing progressive electoral energy and contributing to the disappointing performance of many down-ballot Democrats reminds me of the title of a song performed by the Black women’s a cappella group Sweet Honey in the Rock: “There Are No Mirrors in My Nana’s House.” Their message was different, but it makes me think… there are no mirrors in Nancy Pelosi’s House of Representatives.

We do not need a pale centrist agenda to bridge what has wrongly been termed as the Biden-Trump divide. We need a real alternative to both Biden’s centrism and Trump’s far right authoritarianism. And we do have an alternative, as long as we don’t let the Pelosi-Schumer-Clyburn triumvirate talk us out of it.

Our first task has nothing to do with Trump’s base, but our own. In the days ahead, we must not straitjacket our work inside the Democratic Party. We need to strategize and self-organize on all levels.

And by “we” I mean two groups: the eclectic and far-flung motley tribe we call “the left,” and the marginalized frontline communities that have borne the brunt of 21st-century racial capitalism’s wrath, but may not see themselves as explicitly political, one way or another. Those are the two groups that need organizations they can own and shape and feel at home inside of. How do we offer a skeletal frame on which to build that big-tent home, and how do we offer portals of entry to that which is already out there?

We need to hone, polish and sharpen a palpable set of alternatives to the systems, institutions and policy platforms that now exist, and as social activist Toni Cade Bambara once said about revolution itself, we need to make it all “irresistible.”

In the days ahead, we must not straitjacket our work inside the Democratic Party. We need to strategize and self-organize on all levels.

We have the cornerstone of this visionary agenda in three sets of movement-generated documents: (1) The Green New Deal (augmented by the Red Deal and the forthcoming Red, Black and Green New Deal); (2) The Breathe Act, generated by the policy table of the Movement for Black Lives; and (3) The People’s Charter, created by the Working Families Party. These concrete policy proposals are based on values and vision: a commitment to minimize and repair harm, confront systemic racism, place people above profits, respect the rights and dignity of marginalized and oppressed communities, and save the planet.

These progressive policy documents are important. They illustrate in stark terms that movements are not simply protest campaigns; narrowly defined, they are generative spaces where new ideas and creative solutions are incubated. But how do we leverage the power necessary to really enact these game-changing policies? To do so, we need expansive, inclusive organizing efforts at all levels, including the level of self-organization. More specifically, we need to build stronger labor organizations, cooperatives, block clubs, reading groups, freedom circles, coalitions, networks and parties that connect the different sites of local organizing, while still giving people the self-determining democratic power that local groups provide. At the same time, we have to create on-ramps and portals of entry to the national movement groups that already exist.

We need mass-based membership organizations! We have enough invite-only think tanks, elite policy teams and closed-door leadership circles, and we have too many self-proclaimed celebrity leaders. We need frameworks that say to people, “If you agree with us, here is how you join.”

Candidates running for office cannot be the only ones making that offer. The 70-million-plus people who voted Trump out of office need a real political home. The 23 million who marched against racism and police brutality earlier this year need a political home. That said, how that home is built and on what foundation is key. Certain sectors of the left still argue for a “colorblind” unity but that simply won’t work. Millions of white people have demonstrated unprecedented willingness to stand up to some of the most egregious examples of racism. The task is to deepen that commitment, not ignore it. Much work to do on all of these fronts.

This work is not primarily about compromise, it is about strategy and struggle and relentless effort.

Our second set of analytical and political tasks is to dissect, demystify and diffuse Trumpism. Seventy million people were willing to support a guy who calls neo-Nazis “fine people;” who cages Brown children; who pillages the natural environment; who gives perks and pardons to his thuggish cronies; who uses his position to fill his own pockets; who threatens his critics, including media; and who places lives at risk for the sake of ego, vanity and ambition. What a guy! All the makings of a dictator, and tens of millions of Americans went into the voting booth and chose him. That is disturbing, at the very least.

Trump’s political ascendancy, irrespective of his narrow loss at the polls, shows that there is a mass base willing to support a xenophobic, American-style fascist agenda. So, Trump is out of the White House but Trumpism continues. The worst-case scenario is that Trump was just the tester, the raggedy and sloppy dress rehearsal for what may come next. He has emboldened a racist far right fascist movement that now feels aggrieved and on the move. Thousands of them were in the streets in Washington, D.C., last weekend, and they were violent. At least two anti-racist protesters were reportedly stabbed. Despite the jumbled rhetoric of individual liberty, these movements, for the most part, are enamored with a pseudo-strongman leader. Their next hero may be smarter, more conniving and more effective than Trump. We have to thwart the growth of this dangerous movement. They won’t simply be voted away

Part of the work of undermining fascism, and its willing and unwitting enablers, is to disaggregate the movement, as the analysts at Political Research Associates and Southern Poverty Law Center do. Seventy million Trump voters are not a monolith. Some of them clearly embraced Trump’s racist, venomous ideas wholeheartedly. Hopefully, they are a minority. Others are outright ignorant, falling for the many lies they see on television. Finally, some Trump supporters are undoubtedly seduced by his rhetoric, embodying a kernel of truth as every lie does, that “the system is rigged,” and, stretching the limits of credulity, that Trump is out to help “the little guy,” and the average Joe.

Throw in a few hundred congregations of opportunist evangelicals with a skewed and selective brand of morality, and you have Trump’s base. So, the “hearts and minds” part of the battle is to expose, confront and defeat some, shame (yes, shame!) others, and provide a genuine moral and political alternative to those willing to listen.

We have to offer people an entry point into a radically democratic process of social transformation grounded in process and principles.

We have to make the case — for prison abolition, Medicare for All, divesting from police and investing in communities, climate justice, LGBTQ and women’s rights, disability rights, housing for all, an end to the debt trap, the redistribution of resources from the few to the many, a just immigration policy and an end to the Muslim ban, peace on our streets and in the world — persuasive and irresistible. We surely won’t win all of them, but we can win some of them.

Can we do this? Sí, se puede. Over 12 million people voted for Bernie Sanders and Elizabeth Warren earlier this year, two of the most progressive major contenders we have seen in a Democratic Party presidential primary. Neither one was perfect, but both were left-leaning, if not left on most issues, in contrast to the “safe” middle-of-the-roader that won the nomination.

What if half the people who voted for the progressive flank of the party could be energized to organize those who are skeptical about voting altogether, as well as some who voted for what was erroneously framed as the “safe center,” and perhaps even win or neutralize some of those who drank the Trump Kool-Aid but are now gagging on it? This work is not primarily about compromise, it is about strategy and struggle and relentless effort.

So, yes, we can. We must. We must roll up our sleeves, get over our aversions and walk into places of worship, community centers, college campuses, unemployment offices, state fairs, internet chat rooms and onto street corners. We need to talk, listen, debate, build trust and win people to a process of vision-building and freedom making. We cannot pretend to have all the answers, but we do have some of the answers. And we have to offer people an entry point into a radically democratic process of social transformation grounded in process and principles. The other path is not a dead end, but a deadly precipice.

[Barbara Ransby is a historian, author and longtime activist based in Chicago. She is author of Ella Baker and the Black Freedom Movement and is president of the National Women’s Studies Association. Follow her on Twitter: @BarbaraRansby and @btmmayday.]