Parliamentary Elections in Venezuela: All You Need to Know

For the first time in recent history, Venezuela’s left is divided. Will this disrupt the PSUV’s plans to retake control of the National Assembly? 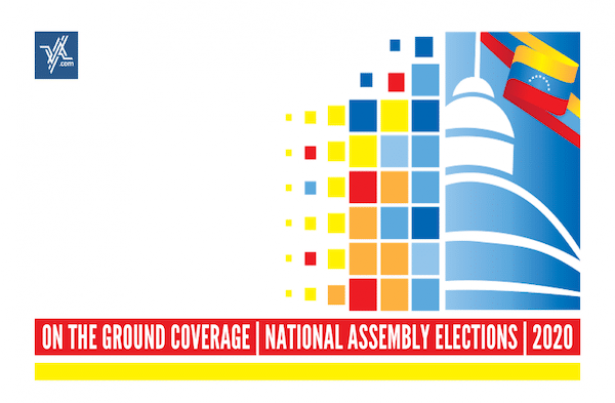 This December 6, Venezuela is holding its twenty-sixth election since Chavismo took political power in 1998. This time around, the people will elect a new National Assembly with one of the most diverse ballots seen in recent years, in which five major blocks – two from the left and three on the right - are competing.

Venezuelanalysis brings you this quick guide which explains everything you need to know before the vote, while also highlighting some key contests taking place.

Who will they elect? 277 deputies, 111 more than in the previous parliament. Forty-eight of these will be elected on a newly constructed national list system and 96 on regional lists, both via the D’Hondt proportional representation method. 130 will come from the country’s circumscriptions via first-past-the-post systems. Three indigenous deputies will also be chosen.

Why now? Venezuela’s Constitution clearly states that elections must be held this year as the current parliamentary term expires on January 5, 2021.

What do deputies do? Their responsibilities include passing laws, constitutional reforms, approving public budgets, auditing and/or removing public officials and ministers, authorising foreign military missions in the country, approving international agreements and appointing public powers such as National Electoral Council rectors and Supreme Court judges. The National Assembly is one of five independent branches of the State.

How does the day unfold? People can vote from 7am to 6pm (unless electoral authorities extend it) with just their ID card and fingerprint. The system uses new electronic touchscreen machines after over 95 percent of existing machines were destroyed in an arson attack in February. A paper backup is also produced allowing for audits of the electronic tallies to be carried out. 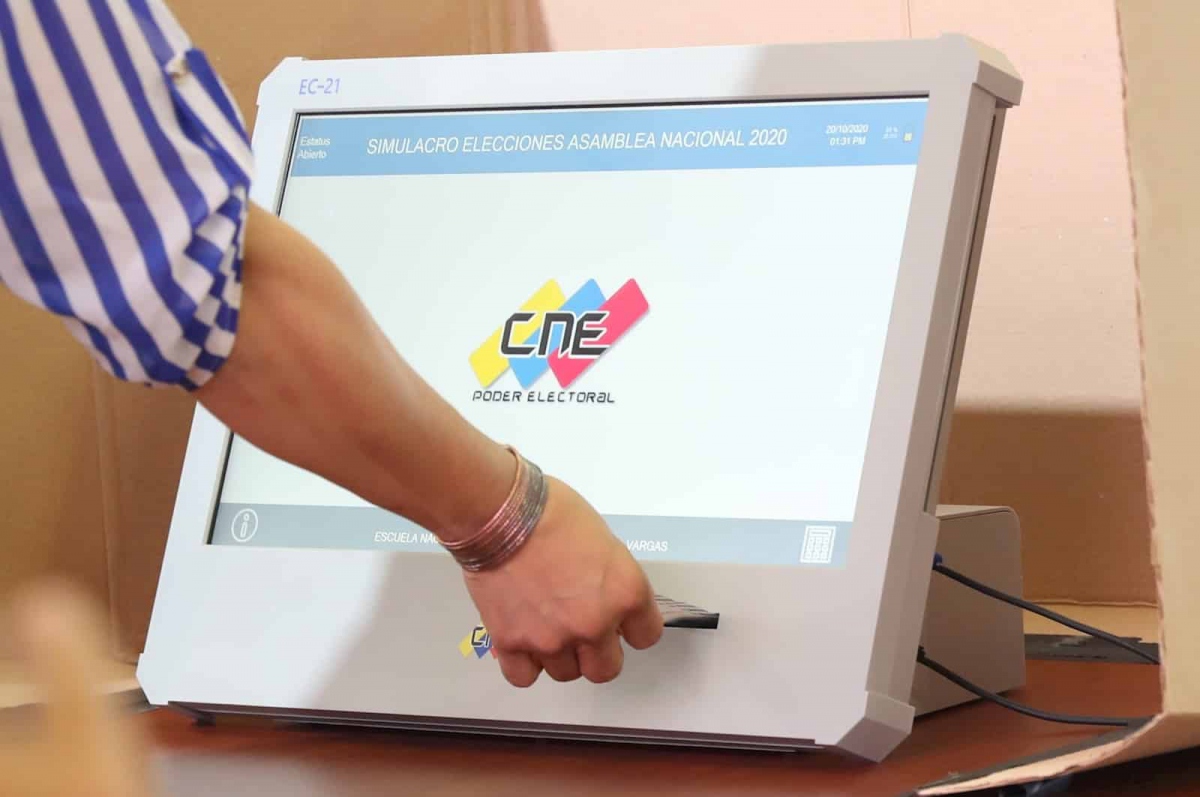 The new EC-21 voting machine will be used. (CNE)

Will there be international observers present? New electoral authorities have made an effort to secure an ample international mission to sew confidence in the process both at home and abroad. As such, a host of multilateral bodies, including the UN, CARICOM and the African Union, have been invited. The Council of Latin American Electoral Experts (CEELA) is also due to be present. The EU, however, has turned down an invitation after its demand that the vote be postponed was refused by Caracas.

What are the COVID-19 controls in place? Facemasks are mandatory and disinfecting stations have been incorporated into the voting stations. The touchscreen machines will also be disinfected after every vote. The Bolivarian Militia has been charged with guaranteeing social distancing in the queues and voting centres, and all electoral staff will undergo a prior PCR test. Postal votes are not allowed, but Venezuela has one of the highest number of voting centres compared to its electoral register in the world, as well as a quick voting process, reducing large crowds.

When can we expect the results? General results are normally announced by the National Electoral Council (CNE) Sunday evening, with more specific local ones reported during the course of the night and early the next morning in some rare cases.

What is the expected international reaction? The Trump administration and many of their regional allies, which continue to back the National Assembly’s outgoing president Juan Guaido have already cried fraud and declared that they will not recognise the new parliament. It is unlikely that Washington’s policy will change under the incoming Biden administration. The EU has also pledged not to recognise the results. Other countries, including Venezuela’s key allies China and Russia, are expected to recognise the results and the new National Assembly.

What is the status of the current National Assembly? The prior parliamentary elections in 2015 were largely considered to be a wakeup call to hegemonic Chavismo, with many citizens deciding to punish the government’s lack of action on crime, inflation or corruption by voting for the opposition or abstaining. As a result, rightwing forces won a 65 percent of the seats, defeating a unified Chavismo by 109 to 55.

However, after the new assembly’s leadership refused to suspend three deputies accused of electoral fraud, and proceeded to pass a series of laws deemed unconstitutional, a legal power dispute arose with the Supreme Court declaring the assembly to be in contempt and its decisions null just one year after taking office. The same court, and later the National Constituent Assembly elected in July 2017 as a superseding body, proceeded to temporarily take over legislative duties.

Nonetheless, the parliament, which continued to sit despite its illegal status, doubled down on its efforts to oust President Maduro using impeachment, foreign military efforts, support for sanctions and most recently backing Juan Guaido’s self-proclamation as “interim president” in 2019 to this end. A new, legal, National Assembly is widely considered to be a key element in bringing political stability back to Venezuela.

What are the voters’ options? There are 107 political parties signed up, with 14,400 candidates running (three times more than in 2015). They are principally grouped into five blocs.

Two of the blocs are from the left, with the government bloc, sometimes referred to as the PSUV+ bloc (United Socialist Party PSUV plus PPT, Tupamaro, SV, PODEMOS, UPV, ORA, MEP and APC) leading the fray and deploying its well-oiled electoral machinery. A number of leftwing forces have decided to break with the government’s candidates nationwide for the first time in recent history and build the Popular Revolutionary Alternative (APR), which is using the Communist Party’s (PCV) ticket at the ballot. Several APR forces have had legal obstacles after Supreme Court interventions which replaced parties’ critical leaderships and installed ad hoc, government friendly ones.

Right wing opposition forces remain largely fragmented, with the more radical sectors led by Juan Guaido boycotting the election. There are a significant number of parties participating however, both large and small. Venezuela First, Popular Will and United Venezuela have joined forces on one hand, while there is a partial alliance in some regional lists but not across the board between the traditional conservative heavyweights Democratic Action and COPEI and the smaller Progressive Advance, El Cambio and Cambiemos parties. Finally, MAS, NUVIPA, ProCiudadanos and UPP89 have also struck a similarly patchy alliance to offer rightwing voters three main options. Opposition parties Democratic Action, Copei and Popular Will have also been subject to Supreme Court-induced leadership changes in recent months, with hardline leadership figures replaced with ad hoc juntas which pledged to run in the elections. 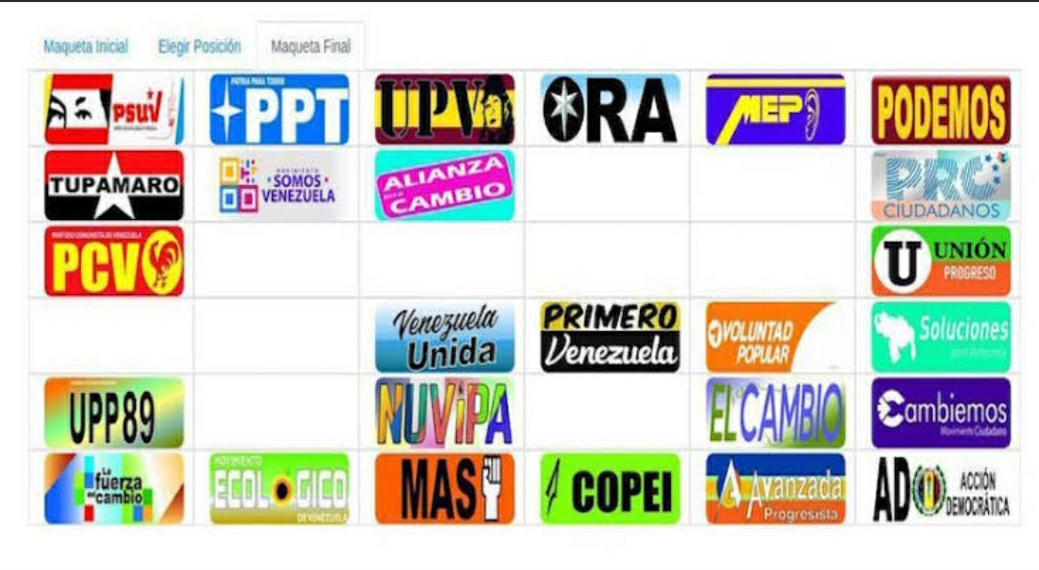 How has campaigning gone and what are the main issues? Campaigning during a Covid-19 lockdown has been a new experience for Venezuela, with greater emphasis placed on digital ads, despite on-going power outages and poor internet connections. Countering increasing abstention levels in past elections has been a cross-party campaigning element. The PSUV+ bloc has also focused on denouncing the imperialist blockade and “rescuing” the opposition-led National Assembly, while the APR has centred on the government’s rightward shift on economic policy and issues including corruption, low wages, and cooking gas and fuel shortages. The alliance has denounced censorship and persecution against its candidates, as well as misuse of public assets and violation of Covid-19 norms by some government candidates.

Right-wing campaigns have largely repeated traditional strategies to discredit and argue that the Chavista process in general is failing. All of the parties have participated in CNE-led audits and have agreed to a series of campaigning norms. Right-wing opposition candidates have been given ample access to public and private means of communication, with one of the major issues in debates against government candidates being where the blame lies for the poor state of public services and the economy: the blockade or public policies.

Previous key races have focused on battlegrounds where divergent Chavista currents vied for public backing. However, with the rupture between the APR and the government bloc now on a national scale, we can expect such tussles everywhere. Some of the closer contests will be seen in rural areas of Barinas, Portuguesa, Lara, Monagas and Bolivar States, where living conditions have deteriorated significantly in recent years. In urban and capital sectors, which suffer less acute fuel shortages and blackouts, the results are expected to be more clear cut.

The divisions between the opposition blocs are also worth monitoring, especially in their strongholds. Depending on how they play out, some of these strongholds may potentially open up to Chavista gains, such as in Merida, Tachira, Zulia, Nueva Esparta and Anzoategui States, as well as eastern Caracas, or may potentially clear the path for APR candidates to steal seats on regional lists.

One of the key factors in Sunday’s elections will be turnout. It is largely expected that a combination of emigration, hard-right boycott and general apathy caused by increasingly tough day-to-day conditions will rule the day, reducing the new assembly’s popular legitimacy both at home and abroad.

The opposition divisions will likely lead to a government/PSUV+ majority in the new parliament, but the extent of this majority may depend on to what extent the APR bloc is able to capitalise on widespread discontent with government policy in popular sectors or whether the famed PSUV electoral machine and its reliable die-hard vote can weather the storm. A hung parliament, and the subsequent inter-party wrangling that follows, is a possibility facing the country for the first time in many years.

As always, stay tuned to venezuelanalysis.com and our social media accounts for rolling coverage election day, as well as subsequent results and analysis.