“Freaky” offers liberating and honest portraits of young women and queer people, free from tokenism and broad generalizations to which the genre can often resort. 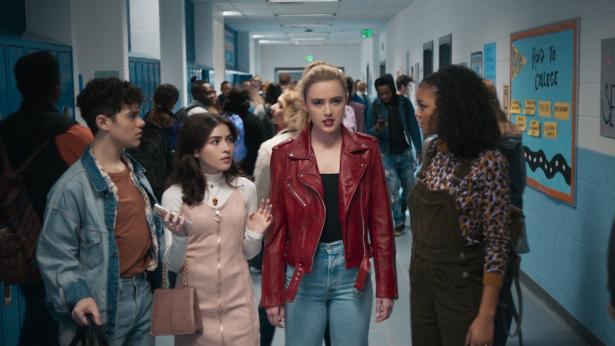 The horror genre loves its tropes — sets of rules that dictate survival based on stereotypes around morality, class, race, gender and sexual orientation.

Much of the game in modern horror comes in examining and subverting those tropes, perhaps none so recent and notable as “Freaky,” Christopher Landon’s body-swap film from Universal Pictures that hits PVOD on Friday.

Dressed up as a gory comedy, “Freaky” offers liberating and honest portraits of young women and queer people, free from tokenism and broad generalizations to which the genre can often resort.

In “Freaky,” a struggling teen girl Millie (Kathryn Newton) and a menacing serial killer (Vince Vaughn) switch bodies thanks to a supernatural artifact. Now trapped in the killer’s flesh, Millie races against a clock to reverse the effects before she’s stuck forever, aided by best friends Nyla (Celeste O’Connor) and Josh (Misha Osherovich).

Warning: Spoilers ahead for “Freaky.”

From its opening sequence — in which a group of partying teens establish the myth of Vaughn’s serial killer, the Blissfield Butcher — Landon and co-screenwriter Michael Kennedy signal their desire to subvert expectations.

A blonde girl having sex with her boyfriend bails on the interlude once she’s achieved her own satisfaction, leaving her lover in the lurch. He deals with it as instructed, shortly before both meet an untimely end at the hands of Vaughn. We soon meet Nyla, a Black high school student who stands out as the thought leader of the group, and Josh, an out gay character who shows equal parts cynicism and heart.

“The auditions that I get are characters written specifically for Black people, which can feel like tokens or caricatures of Black people, or roles you can tell were written for white people. The descriptions will say stuff like ‘urban accent,'” O’Connor told Variety about Nyla. “I knew the character Nyla was written as a Black character, but that was one aspect of her identity that the script simply mentioned and then moved on. It wasn’t central to her personality, which I thought was really refreshing.”

Osherovich, who identifies as gender non-binary and prefers they/them pronouns, says playing Josh felt not just like an accurate representation of queer youth, but a subversive commentary from their screenwriters on how horror can treat that community.

“My character is a gay best friend, but also a commentary on the gay best friend,” Osherovich said, referencing one of Josh’s marquee jokes included in trailers and TV spots for the film. Josh and Nyla are running in terror from Vaughn, unaware their friend Millie is actually trying to explain the freak accident.

Too often, gay characters meet brutal ends in filmed content (known as the “Bury Your Gays” problem), as do people of color, specifically in horror. But for Josh and Nyla, Osherovich says, “there are many times when we rise to the occasion and display real humanity, because we’re real people who care deeply about our friend Millie. We’re not just jammed-in characters.”

Landon, whose resume includes the profitable “Happy Death Day” franchise at Blumhouse and the pitch-black indie “Burning Palms,” says the script for “Freaky” in many ways fulfilled his and Kennedy’s wishes as queer young men.

“Michael and I were both closeted queer kids in high school, and for us there was a certain fantasy and wish fulfillment, but also something full circle. For us to be able to write a character like Josh, who is out and comfortable. I was grateful that Universal and Blumhouse didn’t blink,” Landon said.

He recalled an experience on his 2015 film “Scouts Guide to the Zombie Apocalypse,” a Paramount Pictures release that contained some queer references, but was “less overt,” Landon said.

“I had a gay zombie who did a Britney Spears singalong with the scouts. I remember getting pushback for it at the studio, someone said, ‘Why are you putting so much gay shit in this movie?’ This executive and I were very comfortable with each other, and I don’t think this person was being homophobic, but they had never encountered such things in studio fare. I feel like that’s not something I would necessarily hear today. I’m hopeful things are changing and that people want to see more representation,” said Landon.

Examples of this authenticity for queer people are plenty in “Freaky.” A gag from Josh about the lack of eligible men in his town leads to a Grindr profile of a grizzly older man rocking leather fetish gear, who is revealed as the town mail carrier. In a later scene, he resurfaces delivering mail to Millie’s mother, where he appears empathetic to the loss of her husband and Millie’s father.

“It was important to reinforce the idea that people have dignity, and are not just sexualized creatures,” Landon said.

Another pivotal scene comes when Josh, who early in the film expresses a desire to meet “sexually fluid straight boys” at a high school dance, is cornered by a drunk jock before the film’s climax. The boy in question is surly and repressed, calling Josh a homophobic slur when his advances are refused. It’s the kind of moment that other queer-centric horror like Ryan Murphy’s “American Horror Story: 1984” might have let play much longer and steamier before exposing its toxicity.

“Everyone wanted to see Gus Kenworthy in an aerobics class, so kudos to Ryan Murphy for always coming through with everyone’s fantasy,” Landon said of “AHS: 1984” and its half-naked Olympian. “But when we were writing the scene with [Josh and the drunk jock], there was a fork in the road and we could have easily made it about him finally getting what he wants. But he’s on a mission to save his friend. We wanted him as a character to always be on a moral high road, and we wanted him to call this guy out, especially when he calls him a f—–.”

The film’s portrait of young women is just as liberating, the stars said. As an up-and-coming actor, O’Connor was thrilled when she arrived to her first day of costume fittings for “Freaky’ and saw her wardrobe.

“Nyla’s outfits were all of these bright colors and patterns, overalls and pants. I was so excited about the pants because I really did not want to be sexualized. I feel like so many horror movies rely on stereotypes around femininity, and sexualizing women,” she says.

Newton calls the project “an honest representation of the world we’re living in now.” “Speaking of tropes, my character Millie, you see her and think, ‘Why would this girl think she’s not good enough?’ There’s so much going on in a person’s life, and it’s important to know that everyone has things they’re going through.”

While she plays a smart-and-sweet Millie, Newton shines as a comedic actress and action star when portraying the Blissfield Butcher in her own body. Clad in blood-red leather and slaughtering toxic jocks and mean girls, she evokes the power of great horror heroines while never forgetting to remind us she’s a murderous villain.

“By being outside her body and looking at herself, Millie gets to see how great she is. She knows what she’s capable of, and isn’t going to let anyone mess with her,” says Newton.

Screen veteran Vaughn also came with an open mind, and a willingness to learn. Newton said the pair worked tirelessly studying one another’s mannerisms to make sure their portrayals were sensitive. Osherovich recalled a pivotal van ride from set, where Vaughn asked them about their non-binary journey.

“At the time, I still identified as he/him and I was just starting to come to terms with my non-binary identity. Vince asked a lot of questions. He’s a really curious guy, and he really gave me the floor to talk about my queerness, growing up in a super conservative Russian family,” they recalled. “I could see him processing in a way he hadn’t before. It felt like such a gift that somebody older and established, and a straight white male, was actively interested in learning about. It was ridiculously empowering for me, and I don’t even think he knows that.”