Chanukah Is About Resistance. Let’s Resist This COVID Spike Through Mutual Aid

The essence of Chanukah is the theme of resistance. The story commemorates the victorious resistance of the people over the power and might of empire. Chanukah celebrates the spiritual strength of resistance to an often harsh and unyielding world. 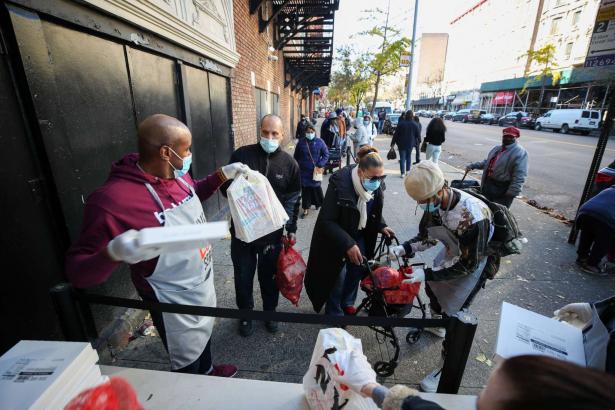 Volunteers from a nonprofit organization provide food supplies to people who line up ahead of Thanksgiving amid the COVID-19 pandemic in the Harlem neighborhood of New York City on November 20, 2020., Tayfun Coskun / Anadolu Agency via Getty Images // Shalom Rav

With Hanukkah now upon us, the internet is abuzz with articles offering guidance on how to celebrate the holiday in the age of COVID-19. While most of them focus on practical issues such as socially distanced Hanukkah parties and Zoom candle lightings, I’ve been thinking a great deal on what the story of Hanukkah might have to offer to all of us as we gear up for a winter like none we’ve ever experienced in our lifetimes.

Hanukkah, of course, is based upon the story of the Maccabees, the small group of Jews who successfully liberated themselves from the oppressive reign of the Seleucid Empire in 167 BCE. The legacy of this story, however, is a complex one because the Jewish struggle against religious persecution took place within the context of a bloody and destructive Jewish civil war. In contemporary times, the meaning of Hanukkah has become even more complicated given its proximity to Christmas, subjecting it to the uniquely American religion of unmitigated commercialism.

Beyond all these complications, I’d argue that the essence of Hanukkah is the theme of resistance. At its core, the Hanukkah story commemorates the victorious resistance of the people over the power and might of empire. On a deeper level, we might say that the festival celebrates the spiritual strength of our resistance to an often harsh and unyielding world.

In this regard, it is significant that Hanukkah takes place in the winter. Apropos of the season, the festival prescribes resistance to an increasingly colder and darker world by lighting increasing numbers of candles during this eight-night festival. Those of us who celebrate this holiday are instructed to place our menorahs in our windows as an act of “spiritual defiance,” directing the light outward into the night where it may clearly be seen by the outside world.

There have indeed been moments in Jewish history in which lighting the menorah was literally an act of resistance. One powerful example can be seen offered in a single image: the famous photograph taken in 1932 Germany showing a menorah on the window sill of a Jewish home, with a Nazi flag clearly visible across the street. Another well-known moment of Hanukkah resistance occurred in 1993 when, after a brick was thrown through the window of a Jewish home in Billings, Montana, scores of citizens showed their solidarity with the Jewish community by taping paper menorahs in their windows. More recently, on the Hanukkah after the Pittsburgh synagogue shooting, one local Jewish leader commentedthat the menorah is “not just something that we display in our homes for ourselves … but something we light so that passersby can see. For us, this year that feels like an act of resistance.”

In 2020, we find Hanukkah arriving amid a winter that medical experts are calling “the darkest days of the pandemic” and “COVID hell.” In a recent interview, Michael Osterholm, director of the Center for Infectious Disease Research and Policy at the University of Minnesota, said, “the next three to four months are going to be, by far, the darkest of the pandemic.” Another expert has predicted that more lives will be lost in December than the U.S. saw in March and April combined.

With such an unprecedented and terrifying winter bearing down upon us, I’d suggest that the ideal of Hanukkah resistance is more powerfully relevant than ever. This resistance, of course, presents us with profound challenges. After living with the pandemic for the better part of a year, so many throughout the U.S. are succumbing to “COVID fatigue” — following months of social isolation and anxiety, increasing numbers of people are becoming less vigilant about the pandemic practice of masking and social distancing, even as infection rates spike precipitously.

With the darkest days of the pandemic ahead of us — even as we agitate for rent cancellation, eviction resistance and universal health care — we have another form of resistance at our disposal: We can resist government inaction/abandonment of its citizens by participating in the grassroots, self-organized networks of support known as mutual aid.

While these community-based efforts are not new, they have proliferatedwidely since the onset of the pandemic. As Jia Tolentino pointed out in a New Yorker article last May:

[Mutual aid] is not a new term, or a new idea, but it has generally existed outside the mainstream. Informal child-care collectives, transgender support groups, and other ad-hoc organizations operate without the top-down leadership or philanthropic funding that most charities depend on. Since COVID, however, mutual aid initiatives seemed to be everywhere.

The concept of mutual aid was coined in 1902 by the Russian anarchist/scientist/economist/philosopher, Peter Kropotkin, who arguedthat mutual aid could be traced to the “earliest beginnings of evolution.” Kropotkin posited that solidary provided the human species with the best chance of survival, particularly given the emergence of private property and the rise of the State:

It is not love and not even sympathy upon which Society is based in mankind. It is the conscience — be it only at the stage of an instinct — of human solidarity. It is the unconscious recognition of the force that is borrowed by each man from the practice of mutual aid; of the close dependence of every one’s happiness upon the happiness of all; and of the sense of justice, or equity which brings the individual to consider the rights of every other individual as equal to his own. Upon this broad and necessary foundation, the still higher moral feelings are developed.

Some of the most well-known examples of mutual aid in U.S. history, in fact, were the survival programs created by the Black Panther Party (BPP) and the community-based initiatives organized by the Puerto Rican Young Lords Party in the 1960s and ’70s. FBI Director J. Edgar Hoover himself grasped the radical power of these mutual aid projects. In a now infamous internal memo, he wrote that the Black Panther breakfast programs represented “the best and most influential activity going for the BPP, and is as such, the greatest threat to efforts by authorities.”

Another important aspect of mutual aid is the understanding that disenfranchised people cannot ultimately depend on state institutions to save them. According to Puerto Rican scholar Isa Rodríguez, “‘Solo el pueblo salva al pueblo’ — ‘Only the people save the people,’ became a rallying cry for Puerto Ricans following the devastation of Hurricane Maria in 2017 as multiple organizations — mostly based on grassroots groups that existed prior to the hurricane — quickly organized to channel aid.”

The community-based solidarity of mutual aid is also fundamentally different from the approach of private humanitarian charities in which the needy are “saved” through the beneficence of those of greater means. And it must not be viewed through the lens of “crisis response.” Mutual aid, rather, is rooted in long-term alliances between people engaged in a common struggle. As historian/writer, Elizabeth Catte has observed:

Mutual aid can be a form of resistance, but the practice itself requires discipline. We can’t do it because it helps us sugarcoat our trauma, or because it lets us say we have claimed goodness in a world where it is often lacking. Mutual aid is incompatible with charity and should offer no pleasure to the well-resourced person or do-gooder who hopes to find worthy recipients of their kindness, because the practice of mutual aid is intended to destroy categories of worth.

Since mutual aid is rooted in the ideal of solidarity, the first step for anyone interested is to cultivate genuine and accountable relationships within their own local communities. This will be undeniably challenging in a time of pandemic, when our mutual safety literally depends upon socially distancing from one another.

Mutual aid projects, however, are adapting to meet these challenges through creative use of commercial internet platforms, online databasesand toolkits. Additionally, mutual aid projects in the age of COVID insist on strict adherence to public health protocols.

In the words of anarchist organizer Cindy Milstein: “While ‘social’ aka ‘physical’ distancing, hand washing, and mask wearing are necessary tools to help stop the spread of this virus, they will only be effective if it’s grounded in an ethics and practice of social solidarity and collective care.”

The most famous Hanukkah story says that when the Maccabees entered the Temple to relight the menorah, they only found enough oil to last for one day. Miraculously, however, the menorah burned for eight days. At the core of this seemingly simple parable are profound lessons about the power of sustainability and resilience. We know from history that popular movements of resistance have the ability to succeed even against the most daunting of foes.

The prospect of the coming winter — and the new year ahead — are undeniably daunting. Amid it all lie fundamental questions: Where will we find the strength to meet these challenges? How will we keep the fire of our commitment to each other from burning out? Who can we depend upon to see us through the coming season and beyond?

The resistance embodied by mutual aid provides us with a compelling answer — in the end, we have each other. As Dean Spade, who recently published a book titled Mutual Aid: Building Solidarity During this Crisis (and the Next), so aptly puts it, “what happens when people get together to support one another is that people realize that there’s more of us than there is of them.”

True resistance can never occur as long as we expect an external human force to somehow show up to save us. In the end, the true miracle of resistance occurs when we show up for one another.

[Rabbi Brant Rosen is the rabbi of Tzedek Chicago.

Rabbi Brant has contributed essays to a number of anthologies including "Zionism and the Quest for Peace in the Holy Land," "On Antisemitism: Solidarity and the Struggle for Justice," and "Reclaiming Judaism from Zionism: Stories of Personal Transformation." He is also a prolific poet and liturgist whose prayers and poems can be found on his blog Yedid Nefesh. In 2018, Tzedek Chicago published his chapbook of prayers, "Songs After the Revolution: New Jewish Liturgy."]