Don’t Subject Your Kids to Rudolph

The world is bleak enough as it is. Of all the disturbing things in Rudolph the Red-Nosed Reindeer, nothing competes with Donner’s rejection of his son. Donner is horrified by the nose. 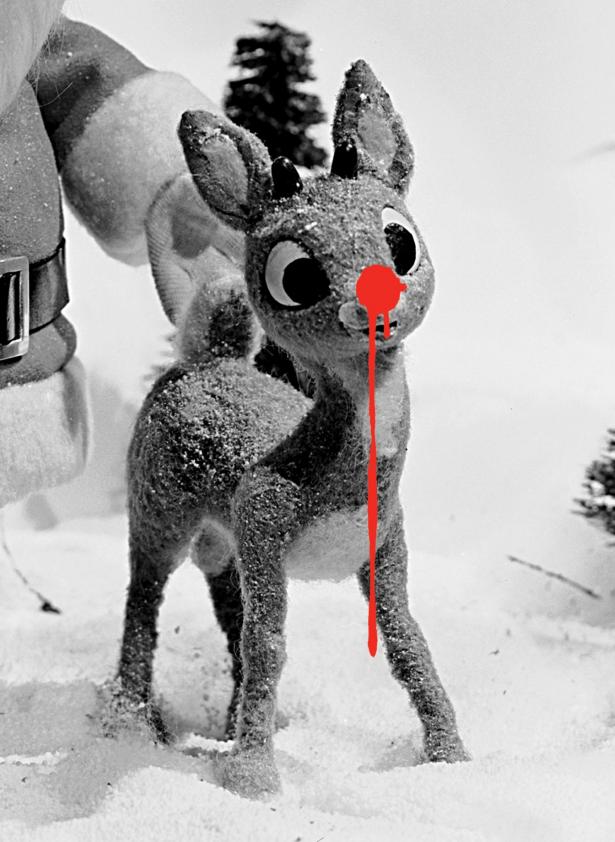 At the dawn of the 1960s, a couple of New York admen named Arthur Rankin Jr. and Jules Bass created the Christmas special. Before that, the networks hadn’t been sure exactly how they should entertain children during the holiday season. They had largely come down on the side of edification, as seen in NBC’s 1951 commission of a children’s opera, Amahl and the Night Visitors, broadcast live on Christmas Eve, after which the show lived on in reruns, and—also on NBC—Babes in Toyland, a turn-of-the-last-century operetta based on the Mother Goose tales.

But American children of the 1960s weren’t going to put up with operas and nursery rhymes. We had grown strong on orange juice, casseroles, and chewable vitamins. We weren’t afraid of polio or tuberculosis—we had the Salk vaccine and the tine test. We had had one small step for mankind, 31 flavors, and 101 dalmatians. The previous decade had already established the whims of children as a legitimate market force; in two years, Wham-O had made $45 million on the Hula-Hoop. Rich guys in office buildings were taking us seriously. What did we want next?

Apparently what we wanted next was 55 minutes of Christmas-crushing despair: Rudolph the Red-Nosed Reindeer. For more than half a century, generations of children have taken the show, which debuted in 1964, into their hearts, and for just about as long, I’ve been trying to avoid it. From my earliest days, the special produced in me only a fretful anxiety, leading to an eventual refusal to watch it. I couldn’t really explain the problem. I knew only that the show didn’t make me feel very Christmassy.

There’s a lot in Rudolph that people don’t seem to remember. At one point, the Abominable Snowmonster tries to murder Rudolph in front of his parents by smashing a giant stalactite on his head. As our gentle hero lies facedown, concussed and unresponsive, his own girlfriend—the beautiful, long-lashed Clarice—wonders aloud why the snowman won’t put the little reindeer out of his misery: “Why doesn’t he get it over with?” This was Rudolph the Red-Nosed Reindeer, not The Third Man. Meanwhile, back at Santa’s workshop—a phrase that should connote only the jolliest of associations—a dark tale is unfolding. Santa, it turns out, presides over a nonunion shop where underproducing elves are deprived of breaks and humiliated; they dream not of Christmas, but of escape. Poorly constructed toys are thrown onto a bare and frozen island, where they cry and wander. How long have they been there? A year? A thousand years? One of the toys, A Dolly for Sue, looks perfectly fine—why has she been stuck with the misfits? Rankin finally admitted the nature of Dolly’s flaw in 2005, when he revealed that she suffered from “psychiatric problems.” The Island of Misfit Toys, it turns out, is but another atoll in the gulag archipelago.

The source material for the show was the work of a grieving man: Robert May, a copywriter at Montgomery Ward in Chicago who, in 1939, had been asked to write a Christmas story that the department store could give away during the holiday season. While he was working on it, his young wife died of cancer. The story he wrote—its relationship to The Night Before Christmas (properly called A Visit From St. Nicholas) falling somewhere between homage and armed robbery, but who could blame him, under such circumstances?—contains a powerful evocation of loneliness. Rejected by the other reindeer, Rudolph weeps, creating a growing puddle of tears; one of the pages of the storybook is stained with his teardrops. And yet the book was a hit. May remarried and suggested to his brother-in-law, a Brill Building songwriter named Johnny Marks, that he turn it into a song, and “Rudolph the Red-Nosed Reindeer” became one of the most popular Christmas carols of all time. Marks lived next door to Rankin, who optioned the song, and—with money from General Electric, which had commissioned him to make a one-hour holiday special for its GE Fantasy Hour on NBC—the work reached its ultimate realization.

Rudolph is a beautiful show, a bright box full of toys that have come to life. The puppets were created in the Japanese animation studio of Tadahito Mochinaga, who traveled to a deer sanctuary in Nara to study and sketch a herd of deer before Ichiro Komuro, an artist in the studio, began to work. The reindeer puppets had long legs, felt hides, and huge, anime eyes. Snow is piled in drifts, the sky is a piercing blue, and everything has a solid, touchable quality. Just as important are the voices that the Canadian actor Billie Mae Richards created for Rudolph. There was a voice for his infancy, his boyhood, and his adolescence, all of them unguarded and gentle—a sweet vulnerability that slayed me. (It also slayed Richards: After she realized why Rankin and Bass had gone with a Canadian—to avoid paying residuals on a work that would become a monster hit—she became so angry that she rarely gave press interviews about the special.) I couldn’t stand for anything bad to happen to Rudolph, but very soon it does.

Of all the disturbing things in Rudolph the Red-Nosed Reindeer, nothing competes with Donner’s rejection of his son. Donner is horrified by the nose, in a “no son of mine” kind of way. One of the numerous readings of the show is that it is a parable about the hardship faced by gay kids in mid-century America, many of whom were rejected by their fathers, their peers, and their teachers.

This theory is reified back at Santa’s little forced-labor camp. We are supposed to understand that blond, dreamy-eyed Hermey wants to be a dentist, not a toy maker. (What he really wants to do, in my opinion, is join the drama club, but that might have been too much for NBC.) Foreman Elf—who, come the revolution, will not be dealt with kindly—humiliates him repeatedly. When Hermey tells him, tentatively, that he doesn’t want to make toys, Foreman Elf repeats the phrase in the “sissy” voice that has haunted gay boys down through the ages. “Shame on you!” cry the other elves, further demoralizing Hermey. Rudolph thinks it teaches children to be themselves, and maybe it does. But it also teaches them how to taunt a boy who seems different. In the time-honored tradition of kids in his situation, Hermey runs away.

Elves in Santa’s workshop are not supposed to be shamed, gay-bashed, and forced to run away! What kind of bullshit was this? And how could the Kool-Aid drinkers look at their Christmas toys in the same way, knowing that they might be covered in the tears of an exploited and brokenhearted elf?

But back to Donner, the one who makes the show unbearable. We meet Rudolph a few minutes after his birth; he and his mother lie resting on a bed of clean hay. Rudolph looks up, and—in the tiniest, sweetest baby voice, exactly the voice that a newborn fawn would have—says, “Pa-pa?” “Ma-ma?” Just then the red nose blinks on and off, and Santa arrives. “Aren’t you the sturdy little fellow!” Santa says. (“San-ta?”) He has come not to congratulate the new parents but to size up their fawn for potential usefulness. The nose flashes. “I’m sure it’ll stop as soon as he grows up,” Donner says urgently. “Well let’s hope so if he wants to make the sleigh team someday,” Santa responds. When Rudolph, now a bit older, doesn’t want to wear the black rubber nose that Donner makes for him (“I don’t wanna. Daddy, I don’t like it. It’s not very comfortable”), Donner replies, sharply, that he’ll wear it and like it: “There are more important things than comfort! Self-respect!” Rudolph’s father doesn’t love him! He doesn’t even … want him.

Rudolph, too, runs away from home, ultimately finding companionship in Hermey and a prospector named Yukon Cornelius, but he realizes that he is a danger to them because he draws the attention of the Abominable Snowmonster. One night, while the other two sleep, he slips away. In the moonlight, he steps onto an ice floe and sails away from us on the dark blue water, unloved, unwanted, and alone.

Rankin and Bass went on to make many Christmas specials, not all of them hits. Nestor, the Long-Eared Christmas Donkey was no Rudolph the Red-Nosed Reindeer. And even I must admit a debt to Rudolph, because that show paved the way for some of the greatest holiday specials of the ’60s: A Charlie Brown Christmas, Dr. Seuss’ How the Grinch Stole Christmas, and (a lesser planet) Frosty the Snowman. I loved those shows and looked forward to them all fall. No one I knew shared my strong feelings about Rudolph, but that was okay; I was used to being the odd kid out. And, for once in my life, I knew I wasn’t the one with the problem.

[CAITLIN FLANAGAN is a staff writer at The Atlantic. She is the author of Girl Land and To Hell With All That]

This article appears in the December 2020 print edition with the headline “The Existential Despair of Rudolph the Red-Nosed Reindeer.”