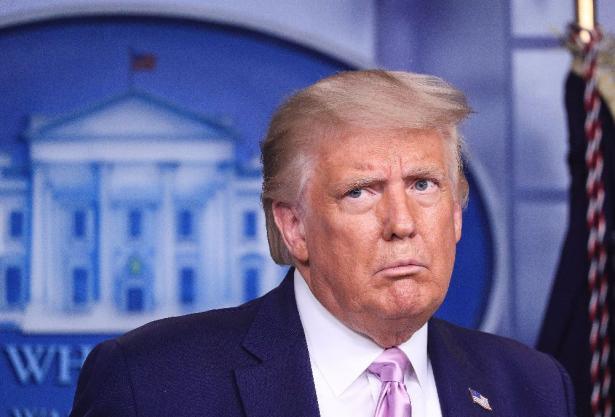 In an hour-long phone call on Saturday, Donald Trump pressed Georgia secretary of state Brad Raffensperger to overturn Joe Biden’s victory there in the election the president refuses to concede.

Amid widespread outrage including calls for a second impeachment, Bob Bauer, a senior Biden adviser, said: “We now have irrefutable proof of a president pressuring and threatening an official of his own party to get him to rescind a state’s lawful, certified vote count and fabricate another in its place.”

“The people of Georgia are angry, the people in the country are angry,” Trump said. “And there’s nothing wrong with saying, you know, um, that you’ve recalculated.”

Raffensperger is a Republican who has become a bête noire among Trump supporters for repeatedly saying Biden’s win in his state was fair. In one of a number of parries, he said: “Well, Mr President, the challenge that you have is, the data you have is wrong.”

Trump’s contempt for democracy is laid bare. Once again. On tape.

Trump did not win Georgia, which went Democratic for the first time since 1992. Its result has been certified. Attempts to pressure Republicans in other battleground states have failed, as have the vast majority of challenges to results in court.

Despite promised objections from at least 12 senators and a majority of House Republicans, Biden’s electoral college victory will be ratified by Congress on Wednesday and the Democrat will be inaugurated as the 46th president on 20 January. Trump will then leave the White House – where he remained, tweeting angrily, all weekend.

Edward B Foley, an Ohio State law professor, told the Post the call was “‘inappropriate and contemptible’ and should prompt moral outrage”. In an email to the Guardian, University of Richmond law professor Carl Tobias said Trump might be “in legal jeopardy after Biden is inaugurated”.

“For example, if the justice department or US attorneys believe that Trump violated federal law or if local prosecutors in states, such as Arizona, Georgia, Michigan and Wisconsin, where Trump may have engaged in similar behaviour with state or local election officials, believe that Trump violated state election laws, the federal or state prosecutors could file suit against Trump.”

Noah Bookbinder, executive director of Citizens for Responsibility and Ethics in Washington, went further, calling for Trump to be impeached a second time, little more than two weeks before he leaves office.

“The president of the United States has been caught on tape trying to rig a presidential election,” Bookbinder said. “This is a low point in American history and unquestionably impeachable conduct. It is incontrovertible and devastating.

“When the Senate acquitted President Trump for abusing his powers to try to get himself re-elected [in February 2020, regarding approaches to Ukraine for dirt on Biden], we worried that he would grow more brazen in his attempts to wrongly and illegally keep himself in power. He has … Congress must act immediately.”

Democratic chairman of the House judiciary committee, Jerry Nadler, said in a statement that Trump “remains profoundly unfit for office” and “may have also subjected himself to additional criminal liability”.

In a tweet, Adam Schiff, the lead prosecutor at the impeachment trial, said: “Trump’s contempt for democracy is laid bare. Once again. On tape. Pressuring an election official to ‘find’ the votes so he can win is potentially criminal, and another flagrant abuse of power by a corrupt man who would be a despot, if we allowed him. We will not.”

Nancy Pelosi, the California Democrat elected House speaker for a fourth term, set out strategy for the election certification in a memo to colleagues.

“Over the years,” she wrote, “we have experienced many challenges in the House, but no situation matches the Trump presidency and the Trump disrespect for the will of the people.”

Chuck Schumer, the Senate minority leader, took a shot at Ted Cruz, the Texas Republican leading calls for an “emergency audit” of the election.

“You want to investigate election fraud?” the New Yorker tweeted. “Start with this.”

Adam Kinzinger, a Republican congressman from Illinois, tweeted: “This is absolutely appalling. To every member of Congress considering objecting to the election results, you cannot – in light of this – do so with a clean conscience.”

Stacey Abrams is laughing about you. She’s going around saying, ‘These guys are dumber than a rock’.

White House chief of staff Mark Meadows and Cleta Mitchell, a Republican lawyer, were also on the call, during which Trump ran through debunked claims regarding supposed electoral fraud and called Raffensperger a “child”, “either dishonest or incompetent” and a “schmuck”. Characteristically, he also threatened legal action.

“You know what they did and you’re not reporting it,” Trump said. “You know, that’s a criminal offence. And you know, you can’t let that happen. That’s a big risk to you and to Ryan [Germany], your lawyer. That’s a big risk.”

Referring to runoffs on Tuesday that will decide control of the Senate, Trump said: “You know, the people of Georgia know that this was a scam.

Republican incumbents Kelly Loeffler and David Perdue, seeking to beat Democrats Raphael Warnock and Jon Ossoff, have ranged themselves behind Trump. But Georgia Republicans fear his attacks could suppress turnout as Democrats work to boost their own. 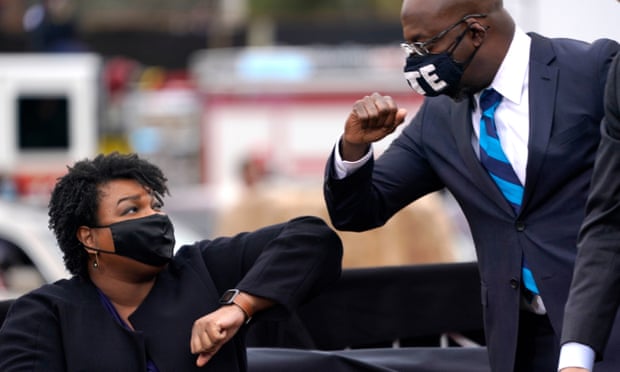 Early voting has reached unprecedented levels and on Sunday, former gubernatorial candidate Stacey Abrams told ABC’s This Week: “What we’re so excited about is that we haven’t stopped reaching those voters. Millions of contacts have been made, thousands of new registrations have been held. We know that at least 100,000 people who did not vote in the general election are now voting in this election.”

Trump told Raffensperger: “Stacey Abrams is laughing about you. She’s going around saying, ‘These guys are dumber than a rock.’”

The Democrats seized on the call.

“That is a direct attack on our democracy,” Ossoff said, at a rally in Savannah. “If David Perdue and Kelly Loeffler had one piece of steel in their spines, one shred of integrity, they would be out here defending Georgia voters from this kind of assault.”

In a statement, Warnock said: “Senator Loeffler has a responsibility to speak out against the unsubstantiated claims of fraud, to defend Georgia’s elections, and to put Georgia ahead of herself. She has not and never will.”

On Twitter, Trump said Raffensperger “was unwilling, or unable, to answer questions such as the ‘ballots under table’ scam, ballot destruction, out of state ‘voters’, dead voters, and more. He has no clue!”

Twitter duly applied a disclaimer: “This claim about election fraud is disputed.”

Martin Pengelly (breaking news and weekend editor for Guardian US) in New York and Richard Luscombe (freelance correspondent based in Miami, Florida) in Miami

Thank you for helping The Guardian beat our goal!

Your support helped raise more than $1.25m for high impact journalism in the new year. From broken healthcare to corrosive racial inequality, from rapacious corporations to a climate crisis, the Guardian will tackle America’s systemic challenges in 2021. It’s not too late to give; our fundraiser closes 10 January.  Support us again!