For Democrats in Georgia, ‘There’s No Going Back’

The two Democratic victories in the Senate runoffs confirmed that Georgia’s metamorphosis from conservative bastion to battleground state was complete. 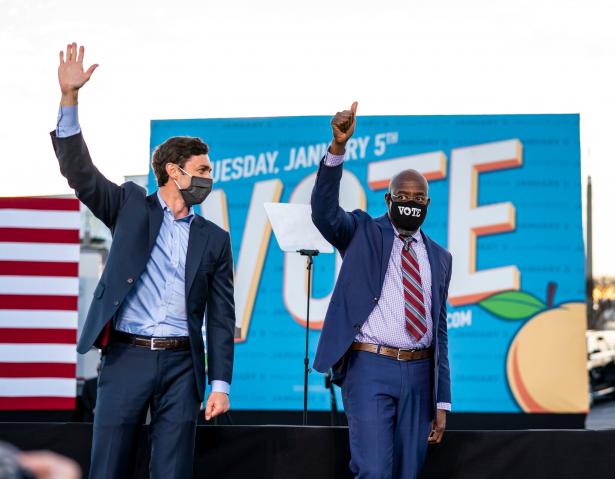 ATLANTA — Now we know for sure: Georgia going Democratic wasn’t just a fluke for Joseph R. Biden Jr. in November. There are forces at work that are rapidly turning the state blue, redrawing the American electoral map.

The victories on Wednesday by the Rev. Raphael Warnock, who became the first Black Democrat to be elected to the Senate from the South, and Jon Ossoff, also in his first elective office, confirmed that Georgia’s metamorphosis from conservative bastion to battleground state was complete. The changing demographics are likely to reshape the political dynamics of this Deep South state for a generation.

Until this week, Republicans held every statewide elective office and majorities in both houses of the legislature. But the victories by Mr. Warnock and Mr. Ossoff in the runoff races, coming on the heels of a narrow win by President-elect Biden, showed that Democrats could forge a coalition to win Georgia even when the focus shifted away from removing President Trump from office.

Perhaps even more significant, Tuesday’s results showed that Democrats could mobilize their diverse and largely metropolitan voting base to boost two overtly liberal candidates — a Jewish man and Black man — to the Senate from Georgia for the first time in history.

“There’s no going back,” said Jacquelyn Bettadapur, chairwoman of the Democratic Party in Cobb County, a once conservative suburban county where Mr. Biden won in November by double digits. “A Democrat would be a fool not to play in Georgia going forward.”

From the earliest moments of the Trump era, Georgia emerged as a hotbed of Democratic opposition, attracting national attention and a flood of political spending after Mr. Ossoff announced his run for a House seat two weeks before Mr. Trump’s inauguration. Since then, the state has been caught up in the political upheaval brought by a polarizing president.

In 2018, Gov. Brian Kemp, with the backing of Mr. Trump, won a narrow victory against Stacey Abrams. This week, Mr. Kemp’s name prompted jeers from a Republican audience at a Trump rally after he refused the president’s efforts to overturn millions of votes in the state. Democrats, meanwhile, are celebrating Ms. Abrams as a liberal hero for turning out voters and swinging the state.

The two Democratic Senate candidates were a striking shift from previous recruits, who tended to be white moderates, and stepped gingerly, and sometimes awkwardly, around the God and guns issues crucial to white voters who had become disenchanted with Democrats.

Mr. Ossoff, with his degrees from Georgetown and the London School of Economics, speaks without a hint of Southern twang; he could hail from Santa Monica, or Portland. He would also be the first Jewish person to be elected to the Senate from Georgia.

Mr. Warnock is the kind of preacher who sees activism as central to the mission of the Black church. As pastor at Ebenezer Baptist Church, where the Rev. Dr. Martin Luther King Jr. once preached, he has embraced Dr. King’s philosophy of economic justice as a corollary to racial justice.

In effect, the two men ran as themselves. As unabashed liberals. In Georgia. 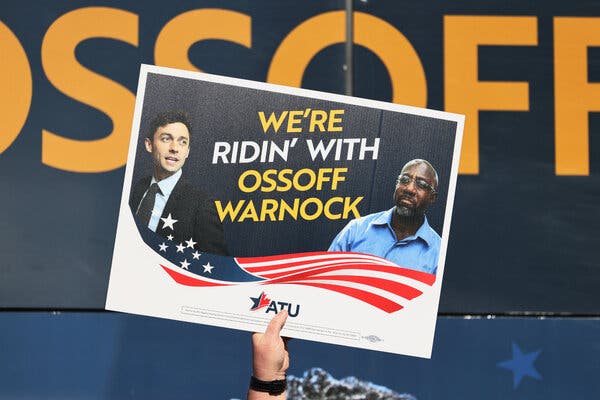 Support for the Democrats on Tuesday in Marietta, Ga. Credit...Michael M. Santiago/Getty Images

The embrace of a more progressive strategy is a result of years of organizing by Black activists, particularly Ms. Abrams, whose 2018 campaign established a blueprint for turning out young, minority and previously neglected Georgians who leaned Democratic. Her defeat supercharged efforts to register voters, bringing an influx of money, national attention and local volunteers.

Yet the biggest assist for Democrats may have come from Mr. Trump himself, who alienated moderate Georgia suburbanites, energized a new generation of voters and alarmed many residents of color, all of which helped Democrats piece together a coalition. Without Mr. Trump as the primary antagonist in future elections, it remains unclear whether Democrats will be able to maintain their political energy in the state.

Mr. Trump is responsible for Tuesday’s outcome in another way as well. He repeatedly made baseless claims that his own loss in Georgia was the result of a “rigged” election system, prompting public battles with Mr. Kemp and other state Republican officials. A leaked recording made the weekend before the election showed that Mr. Trump had pressured Georgia’s secretary of state, a Republican, to “find” votes that would help him overturn his defeat.

A top Georgia elections official, Gabriel Sterling, a Republican, said that Mr. Trump’s false insistence of a corrupt election and the conflict those claims caused within the party might have depressed Republican turnout. A poor showing by Republicans would “fall squarely on the shoulders of President Trump and his actions since Nov. 3,” Mr. Sterling said on CNN.

But Democrats played down Mr. Trump’s impact, instead crediting their push to expand and refocus the party’s infrastructure, which allowed them to capitalize on the state’s demographic shifts.

Representative Nikema Williams, the state Democratic Party chairwoman who was sworn into Congress this week, said Mr. Biden’s victory gave Democrats, particularly Black voters, confidence that they could win competitive races. Early voting showed that turnout among Black voters increased from November, a notable shift from the drop-off that is typical in runoff races.

“This election was not about Donald Trump,” Ms. Williams said. “This was about people on the ground realizing that if they show up en masse, they can overcome the voter suppression and we can win Georgia.”

Regardless of how much influence Mr. Trump continues to command after he leaves office, it’s clear that politics in Georgia have fundamentally changed in ways that will force both parties to shift their strategies.

Republicans, she said, will have to adjust to the reality of running in a competitive environment. From now on, she said, it will be difficult, if not impossible, for Republicans to expect double-digit wins in statewide races, the way that Saxby Chambliss, the U.S. senator, did in his 2008 runoff against the Democrat Jim Martin.

Demographic change goes a long way in explaining the transformation of Georgia politics. White residents, by some estimates, could cease to be the majority in the state by around 2028. Ms. Gillespie said the Democratic Party had built a strategy to take advantage of that change and expand its electorate.

“The Democratic Party has turned latent voters into registered voters, and then into actual voters,” she said.

The Democratic victories are likely to give the party even more swagger as its members relish the chance of a potential rematch in the Georgia governor’s race in 2022. Mr. Kemp may once again face Ms. Abrams, who lost to him in 2018 by about 55,000 votes. That’s assuming he survives a likely primary challenge being stoked by Mr. Trump.

Mr. Kemp is a formidable fund-raiser with deep cultural ties to rural Georgia voters, who remain a potent force. But on Tuesday night, the Democrats’ trash talking had already begun.

“Kemp might need to go ahead and look for a second home because 2022 is a wrap for him — both in the primary and general,” Ms. Williams said, laughing.

Ms. Abrams’s national star, already ascending, is likely to soar. Mr. Ossoff and Mr. Warnock are close allies with whom she campaigned and strategized, after she disappointed national Democrats by declining to run for the seat herself. The two men ran on a playbook Ms. Abrams helped write, jettisoning efforts to run hard to the center, while focusing on minority voters and registering new ones.

If Ms. Abrams does run against Mr. Kemp again, she will almost certainly put that strategy to work in an effort to become Georgia’s first Black governor.

Lisa Lerer is a reporter based in Washington, covering campaigns, elections and political power.  Richard Fausset is a correspondent based in Atlanta. He mainly writes about the American South, focusing on politics, culture, race, poverty and criminal justice.