Wall Street Mega-Landlord Blackstone Plans to Benefit From Another Crisis

Ultimately it is crisis-ravaged real estate where Blackstone seeks to continue to find a goldmine while anchored by generous political contributions and fueled by desperation capital pouring out of central banks and governmental treasuries. 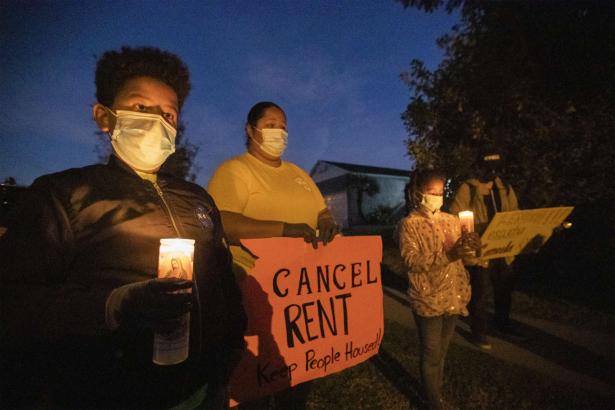 Single-mom Kennia Viera, center, who is unemployed and in danger of being evicted at the end of January, protests with her kids, Florisabella Houston-Viera, 7, second from right, and Enrique Houston-Viera, 9, left, after speaking at a protest for tenants , Allen J. Schaben/Los Angeles Times via Getty Images

Back in 2008, Blackstone emerged as one of the biggest beneficiaries of the subprime crisis, becoming a trailblazer in financializing rents. As that crisis went global, so too did Blackstone’s property empire. By the time the dust had settled, it was the biggest commercial real estate company  on the planet, according to Fortune magazine. .

Now, Blackstone wants to repeat the feat, albeit using a somewhat different playbook. At the Goldman Sachs Financial Services Conference, held on December 9, Blackstone’s CEO, Stephen Schwarzman, gave a few hints about how it plans to do just that. Asked if he thought large firms such as Blackstone would once more gain more market share during this crisis, he responded:

During the last crisis, Blackstone pioneered the buy-to-rent scheme by snapping up, for cents on the dollar, huge batches of foreclosed homes from struggling and bailed-out banks and then turning them into rental properties. In short order, Blackstone’s subsidiary Invitation Homes became the largest owner of single-family rental homes in the United States. It also took the meaning of “absentee landlord” to a whole new level, as accusations of ill repair and poor maintenance quickly mounted. Tenants also complained about excessive rent increases and fees.

Waiting for “Blood in the Streets”

Once the model was up and running in the U.S., it was quickly exported to cities in Canada (Toronto) and Europe (Berlin, Madrid, Barcelona, Dublin, Stockholm…). Since going public in 2007, Blackstone has multiplied eightfold the equity capital it devotes to real estate, to $163 billion. As Scharzman himself put it, the company’s strategy in post-crisis Europe essentially involved “waiting to see how beaten up people’s psyches get, and where they’re willing to sell assets … You want to wait until there’s really blood in the streets.”

As Blackstone’s property empire grew and grew, it managed to convince regulators in the U.S. to allow it to transform part of that empire into rent-backed structured securities. It paid Moody’s, Kroll, and Morningstar lucrative fees to rate a large chunk of those securities AAA. And when the securities began to sour just a few years later after a Blackstone securitization saw a big drop in rental income, Blackstone managed to convince the Obama administration to bail it out by providing explicit government guarantees for the higher-rated tranches.

Now, around half of Blackstone’s earnings come from real estate, with much of it coming from commercial property. In its role as commercial landlord the company holds the fate of hundreds of thousands of struggling small and large business tenants in its hands. In the UK, it is already facing a growing backlash after its commercial real estate subsidiary, the Arch Company, began hiking rents for some tenants in the midst of a global pandemic. Those tenants include florists, cafés, breweries, gyms and mechanics, many of whom have been sledgehammered by the recent crisis. But they’re unlikely to find a sympathetic ear from their landlord.

In his chat with Blostein, Schwarzman didn’t just brag that his firm had emerged as “a huge winner” from the global financial crisis; he also boasted about his firm’s big earnings off high rents, which is a bit rich (pun not intended) in the midst of a global pandemic that has ripped asunder the livelihoods of untold millions of residential tenants and upended the business models of untold millions of companies:

“Just to give you some idea how this breaks, we pick the good neighborhoods, if you will. Real estate has a lot of different sub asset classes. And we’ve concentrated on logistics. It’s about 36% of all the real estate we own. We’re the largest owner of real estate in the private world. And that asset class has boomed with huge increases in rent, almost no occupancies* and rent collections from almost everyone.”

In some of Blackstone’s biggest property markets the pickings are no longer as rich as they used to be. In Spain, residential rents were already peaking in many major cities before the virus crisis plunged the economy into its deepest recession on record. Now they’re plunging. And house prices are expected to do the same. There is also a moratorium on evictions. Plus, the center-left Sánchez government has extended the minimum duration of rental contracts, which has hampered the ability of institutional landlords to turf out the existing tenants of newly acquired properties as quickly as possible in order to jack up rents for new ones.

None of this is good news for Blackstone, which owns some 100,000 real estate assets in the country, including a huge portfolio of impaired assets, such as defaulted mortgages and the homes that back them, and real estate-owned assets (REOs), that are controlled via dozens of companies. Now, it has begun to offload some of those assets.

In the U.S., Democrats passed legislation that would create a one-year eviction moratorium, which could prevent Blackstone and other Wall Street landlords from turfing non-paying tenants out of their homes during a pandemic. But the bill is being blocked by Senate Republicans, to whom Schwarzman donated $35 million during the election cycle as well as an additional $15 million.

During the Goldman Sachs video conference, Schwarzman hinted that his firm may soon start buying up more residential real estate in the U.S., this time concentrated in the suburbs, to which many families have relocated in the wake of recent lockdowns. But the firm is not taking its eye off urban areas; it’s just waiting for prices to fall low enough:

“In the suburbs, for example, suburban residential has turned out to be quite a good place to be. When the cities get cheap enough, then you go back to doing that. So, there’s a lot of interesting things, and every part of the firm is really operating full out, which, if you would have asked me in April whether anything like this would have been possible, you’d have to say no.”

Central Banks Back to the Rescue

In April markets were crashing. Then, little by little, the trillions of dollars that had been conjured up by the Federal Reserve and other large central banks began to feed through to the financial markets, which in turn began to re-levitate, creating an even more bifurcated economy. As mom-and-pop businesses hit the wall in droves and millions of people lost their jobs, the Fed bailed out shareholders whose stocks were plunging and rescued investors of high-risk assets that were in the process of imploding, such as highly leveraged mortgage REITs. The bigger the investor, the more money they got.

Private equity firms such as Blackstone were close to the front of the queue. Despite having on hand an estimated $1.7 trillion of so-called “dry powder” — uninvested but committed capital — private equity firms were big beneficiaries of the emergency loan programs launched in the CARES act. Many of the firms they owned ended up receiving millions of dollars in low-interest PPP loans from the Small Business Administration (SBA). In the UK, private equity groups won a similar concession in September allowing UK companies they own to access emergency state-backed loan schemes.

PE firms such as Blackstone also benefited in a more subtle way from the Federal Reserve’s pledge to buy up to $700 billion of corporate paper, including junk bonds and bond ETFs. In the end the Fed had only bought $13 billion in corporate bonds and bond ETFs as of early December, but its jawboning spurred one of the largest junk bond buying binges in history. And PE firms were among the biggest beneficiaries. The second quarter saw one of the highest-ever levels of junk-bond issuance by private equity-backed companies, at more than $31bn.

In the knowledge that it enjoys the tacit and, at times, explicit backing of the Fed and the U.S. Treasury and with over $150 billion of dry powder — more than any other PE firm — Blackstone is branching out. According to Schwarzman, it has expanded into 11 new business areas with 33 different products since the global financial crisis:

“We used to just do very high return products. Now we do things that are intermediate and things that for us are low, which are 8% plus, but if you’re in the fixed income business, you think that’s pretty high. And we’re expanding globally, doing that type of strategy.”

One area Blackstone has recently moved into in a big way is, ironically, life sciences. Just two weeks ago, it bought a 2.3-million-square-foot portfolio of lab buildings on a 30-acre campus next to Massachusetts Institute of Technology. That was shortly after recapitalizing BioMed Realty, the largest private owner of life-sciences property in the U.S., for $14.6 billion. The firm is also on the verge of acquiring another two life-science buildings in the Boston-Cambridge market for $1 billion, according to sources cited by the Wall Street Journal reported.

The life-sciences sector has been one of the few silver linings for commercial real estate during the pandemic. While most office workers continue to stay home, life-sciences jobs often require special equipment and infrastructure, making it harder to work remotely.

“You can’t create a new drug from your living room or kitchen. You need to be in physical lab space,” said Nadeem Meghji, Blackstone’s head of real estate for the Americas.

Blackstone has also been snapping up warehouse space all over the world to profit from the burgeoning e-commerce business. It is also exploring ways to monetize the client data of the almost 100 companies it has acquired over the years, according to a recent Bloomberg report.

Coincidentally, that story broke just weeks after Blackstone completed its $4.7 billion acquisition of Ancestry, the global leader in digital family history services that has also expanded into DNA testing and advanced genetic health screening. Over 3 million paying customers from more than 30 countries have sent samples of their DNA to Ancestry so that the company could tell them where their ancestors originated from. Now those samples belong to Blackstone.

Blackstone insists it will not have access to Ancestry user DNA or family tree data. But not everyone is convinced. Alan Butler, interim executive director and general counsel of the Electronic Privacy Information Center, said the deal raises privacy concerns as it gives a private equity firm access to health data.

“The big concern when there is a big deal like this is that investors might be interested in that data for other reasons, and not in the ways that consumers intended when they gave over that information,” Butler said in an interview with CBS News.

Given Blackstone’s track record at monetising just about everything it can get its hands on, Butler’s concerns are probably well founded. But it’s ultimately in crisis-ravaged real estate where Blackstone seeks to continue to find a goldmine. Anchored by generous political contributions and fuelled once again by desperation capital pouring out of central banks and governmental treasuries at a time of deep economic crisis, the company hopes to strengthen its grip on bricks and mortar at every level and in many countries.

Nick holds a B.A. in history and is a certified teacher who specializes in teaching English for business and finance to companies in Spain’s financial industry. You can contact Nick at: nickcorbishley75@gmail.com.