The story behind that victory illustrates a lot about where we stand in the push for a fair and working planet. 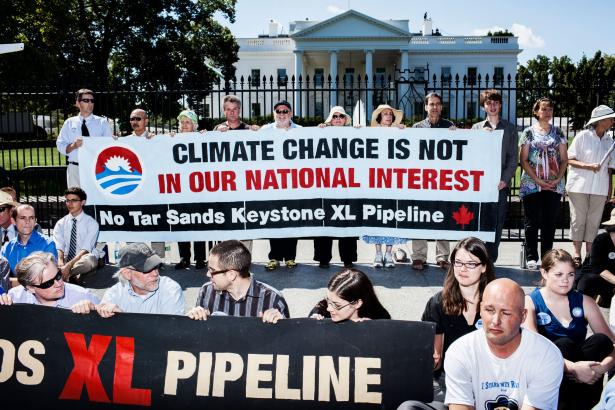 Demonstrators gather in front of the White House to protest the proposed Keystone XL pipeline, in the summer of 2011., Photograph by Melissa Golden / Redux

In his first hours in office, Joe Biden has settled—almost certainly, once and for all—one of the greatest environmental battles this country has seen. He has cancelled the permit allowing the Keystone XL pipeline to cross the border from Canada into the United States, and the story behind that victory illustrates a lot about where we stand in the push for a fair and working planet.

To review: Keystone XL, a project of the TransCanada Corporation (now TC Energy), was slated to carry oil from Alberta’s tar sands across the country to refineries on the Gulf of Mexico. President George W. Bush approved the original Keystone pipeline, and it went into service, early in the Obama years, without any real fuss. A new XL version, announced in 2008, was larger and took a different course across the heartland. And, this time, there was opposition. It came first from indigenous people in Canada, who had watched tar-sand mines lay waste to a vast landscape. First Nations leaders, such as Melina Laboucan-Massimo and Clayton Thomas-Muller, along with Native-American leaders on this side of the border—including Tom and Dallas Goldtooth, of the Indigenous Environmental Network—put up strong resistance and joined forces with ranchers whose lands would be bisected by the pipeline. Organizers such as Jane Kleeb, in Nebraska, found small pockets of support within some of the “big green” environmental groups, much of it coördinated by the veteran campaigner Kenny Bruno. In the spring of 2011, the nasa climate scientist James Hansen helped orient the pipeline as a climate-related fight, pointing to the massive amounts of carbon contained in the Canadian tar-sand deposits and making the case that, if they were fully exploited, it would be “game over” for the climate. That brought the climate movement into the picture; a letter (full disclosure: I drafted it) went out in the summer of 2011, asking people to engage in civil disobedience outside the White House.

At first, it wasn’t clear how many would do so, in part because President Barack Obama was popular with environmentalists. But people—many of them wearing Obama buttons—began arriving in serious numbers. Before two weeks of protest, starting in late August, were over, 1,254 people had been arrested, in one of the largest nonviolent direct actions in recent years. A few months later, many times that number circled the White House perimeter, standing shoulder to shoulder, five deep. The big environmental groups quickly joined the fight. Even so, the experts said that there was no chance to stop the pipeline. (The National Journal polled its “energy insiders,” and ninety-one per cent said that TransCanada would soon have its permit.) But, in fact, the battle was over by mid-November, when Obama announced a delay, in order to consider the question more closely. As he consolidated support for his reëlection bid, he had apparently concluded that “Keystone” and “climate” were too closely linked, though it took him several years to officially reject the permits. Ever since that initial pause, it’s been a matter of holding on to that victory—in close votes in Congress, during the Obama years, in endless wrangling with financiers, and with brilliant maneuvering in the courts, after Donald Trump revived the pipeline during his first days in office. I’m very grateful for Biden’s action, but I had no doubt he would take it—even today, Keystone is far too closely identified with climate carelessness for a Democratic President to be able to waver.

The success in 2011 was, to some degree, a matter of timing. There was already growing concern about global warming, and Keystone proved to be the catalyst for the rapid expansion of the climate movement, which was soon fighting for such things as fossil-fuel divestment and renewable portfolio standards for solar power. The events of 2011 also showed that the fossil-fuel industry was not unbeatable, and it encouraged people to oppose the construction of just about every new fracking well and coal port and liquid-natural-gas terminal. Environmentalists have won many of these infrastructure battles, and they’ve added delay and cost to projects. (Who knows how many bad things were never even proposed in the wake of Keystone XL?) The wins continue: last fall, after an inspired decade-long campaign led by Michigan environmentalists, Governor Gretchen Whitmer announced that the state would close down a tar-sands pipeline through the Straits of Mackinac, in the heart of the Great Lakes. But there have been plenty of losses, too, and Biden will get to help decide the fates of two other critical projects that resemble KXL in many ways.

One is the Dakota Access Pipeline, the debate over which came to a boil with the protests at Standing Rock, during the final months of the Obama Administration; the other is Line 3, another tar-sands pipeline, whose expansion is planned to cross from Canada into Minnesota and which was recently approved by Governor Tim Walz. The most important outcome of the Keystone XL fight was that Obama imposed a de-facto “climate test” on all new large-scale infrastructure projects that require federal approval—and, if you apply the most basic version of that challenge to either of these projects, they fail instantly. Pressure is already building on Biden to do something about them; a letter last week from seventy-five indigenous women leaders demanded the cancellation of all three pipelines. His response to the Dakota Access and Line 3 pipelines will likely depend on the shifting balance of power between environmentalists, indigenous groups, and organized labor.

This surprises many people, who are used to thinking of the fossil-fuel industry as the main pressure group. But that industry is at its strongest during Republican Administrations. With Democrats in power, an equally important constituency is the building-trades unions of the A.F.L.-C.I.O., because they get the well-paid jobs involved in constructing these mega-projects; the unions were staunch proponents of Keystone XL from the start. (Jason Kenney, the premier of Alberta, has said repeatedly in recent months that he was counting on the unions to help TransCanada prevail in the endgame of the Keystone fight, not understanding American politics well enough to know that that particular ship had already sailed; it was as realistic as the company’s Onion-esque last-minute pledge to power the operation of the pipeline with renewable energy.) Line 3, for instance, is proceeding under Governor Walz, a Democrat, likely because it brings a lot of union jobs. “I got a lot of people who said that it’s been nearly a whole year since they went to work,” Royce Schulz, a union steward working on the project in Carlton County, told the Minneapolis Star Tribune, in December. “It couldn’t have hit at a better time, to get people back on their feet and making money again.”

A construction worker earning ninety thousand dollars is, correctly, a more sympathetic figure than an oil executive earning ten times that much. And labor is a key part of the progressive coalition. So, environmental activists (with rare exceptions, such as the always forthright Naomi Klein) have been reluctant to call out the building-trades unions, even when they offered Donald Trump their fulsome support in an effort to get projects like these approved. The A.F.L.-C.I.O. came out in favor of the Dakota Access pipeline in September of 2016, even after security guards used dogs against protesters. In response, the Labor Coalition for Community Action, which includes minority unionists, joined the Communication Workers of America, the nurses union, and other labor heavyweights to stand against the pipeline. The outcome of this fight within labor, and the wider progressive movement, will determine in large measure how aggressive Biden will be on climate-busting projects. If he allows the Dakota Access and Line 3 pipelines to proceed, he will dismay many core supporters, not to mention allow infrastructure that will be spewing carbon into the air for many decades to come. But perhaps this son of Scranton is uniquely positioned to solve this conundrum. What’s needed is a grand bargain, which replaces fossil-fuel-infrastructure jobs with jobs building solar panels, wind turbines, water pipes that don’t carry lead, and so on. These jobs need to be comparable in terms of pay; there has to be necessary retraining for workers; and someone has to figure out how to allocate this new work to existing unions, so that no one gets left out and that all kinds of Americans share in those jobs. It is, in other words, the messy work of a “just transition” that, in this moment of economic and climatic peril, can’t be dodged any longer.

There are instructive and hopeful lessons from the past. For many years, the combined power of unions and auto companies insulated Detroit from federal action on automobile mileage. Barack Obama managed to break that deadlock shortly after taking office when, in return for federal bailouts, he forced the industry to agree to much higher fuel-efficiency standards. One of the people who cut that deal was a young aide to the national economic adviser named Brian Deese; he is now himself the national economic adviser. The rest of Biden’s climate team has solid labor credentials, too—for example, Gina McCarthy, the new domestic climate czar, was the head of the Environmental Protection Agency under Obama, where she helped implement the mileage regulations. As the legislative director of the United Auto Workers explained to Congress, “The continuing recovery of the automobile industry in the United States has as its foundation the regulatory certainty of these tailpipe-emission standards, which is driving innovation in every company and in every vehicle segment.” A few days before Biden’s Inauguration, the team sat down with labor leaders for a formal “listening session.” The official readout was anodyne, but the effort itself was promising—if Biden sticks to his stance that all policy is climate policy, then much can be done. Even Joe Manchin, the conservative Democrat from West Virginia, who now may be the most powerful man in the Senate, given its fifty-fifty split, can perhaps be enticed with a series of proposals to cushion the irrevocable demise of the coal industry. Bernie Sanders now runs the Senate Budget Committee, which will have to look at any of these transition projects, and in the Senate he’s been both organized labor’s biggest booster and the most outspoken opponent of new fossil-fuel infrastructure.

Biden’s action on Keystone XL couldn’t be more welcome, but it’s cold comfort to the Native Americans camped out along the upper Mississippi trying to block Line 3. That battle looks hard right now, especially because the coronavirus pandemic is preventing people from joining them in large numbers. But the Keystone battle looked impossible at the start. When enough people demand action, vested interest and political convenience have to accommodate them. That’s how change works.

Bill McKibben is a founder of the grassroots climate campaign 350.org and a contributing writer to The New Yorker. He writes The Climate Crisis, The New Yorker's newsletter on the environment.