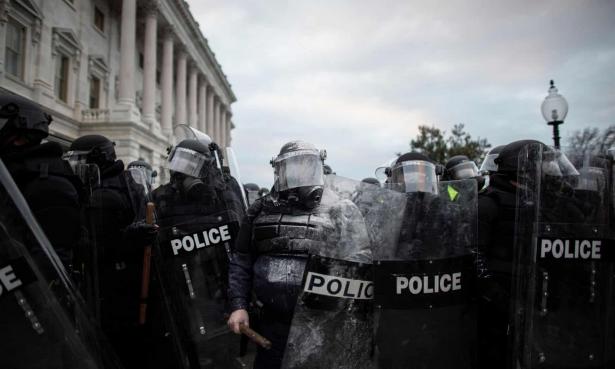 Ten progressive members of Congress say in letter: ‘Trump mob’s success in breaching the Capitol was not due to a lack of resources at the disposal of federal law enforcement.’ ,Photograph: Reuters

An expanded no-fly list. New crimes put on the books. Increased use of the death penalty.

These are some of the ways that politicians, pundits and law enforcement want to head off a repeat of the 6 January attack on the Capitol. But a renewed national security push aimed at addressing domestic terrorism has civil liberties groups steeling themselves, concerned that moves to combat far-right extremism will instead redound against communities of color and leftwing activists.

Last summer’s racial justice protests jump-started a national conversation over the endurance of racism within America’s law enforcement and security apparatus. But despite campaigning on the need to reform those institutions, some mainstream Democrats are now taking the lead on calls to expand them.

The Senate majority leader, Chuck Schumer, has called for the Capitol rioters to be placed on the no-fly list. President Joe Biden, whose campaign website pledges his administration will “work for a domestic terrorism law”, has ordered a comprehensive assessment of domestic violent extremism. The House speaker ,Nancy Pelosi, has called for a new “9/11-type commission”. And the first domestic terrorism legislation to follow the Capitol attack was introduced in the House last week by the Illinois Democrat Brad Schneider.

The Democratic party, however, isn’t entirely united on the issue.

Ten progressive members of Congress, led by the Michigan congresswoman Rashida Tlaib have sent a letter to congressional leadership expressing opposition to an expansion of national security powers.

“The Trump mob’s success in breaching the Capitol was not due to a lack of resources at the disposal of federal law enforcement,” the letter reads. “We firmly believe that the national security and surveillance powers of the US government are already too broad, undefined, and unaccountable to the people.”

“Our history is littered with examples of initiatives sold as being necessary to fight extremism that quickly devolve into tools used for the mass violation of the human and civil rights of the American people,” the letter continues.

It cites as examples the McCarthy-era House Un-American Activities Committee, the surveillance of the civil rights movement in the 1960s and the invention of a category in 2017 called “Black Identity Extremism” the FBI claimed posed a risk of domestic terrorism.

More than 100 civil and human rights organizations have also joined in a statement of opposition to any new domestic terror legislation.

Since 6 January, security officials have resurrected the same well-honed argument trotted out when the debate around domestic terrorism resurfaces: that the law hamstrings police from effectively fighting white nationalist violence. “There are so many limitations on law enforcement,” Bill Bratton, former commissioner of the NYPD, recently told CNBC. “We don’t have many of the tools to battle domestic terrorism that we have to battle international terrorism.” 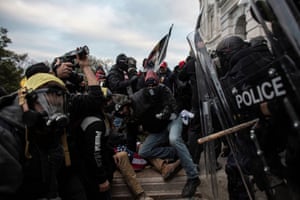 Pro-Trump mob clashes with police as they try to breach the US Capitol on 6 January. Photograph: Reuters

Civil rights and civil liberties experts say that argument is disingenuous, a ploy to seize power in a time of national crisis, and point to the many laws at the disposal of law enforcement in fighting domestic extremism. What they lack, they say, is the will to go after white supremacists the way they do communities of color, despite white supremacists accounting for the vast majority of criminal acts that are classifiable by law as domestic terrorism.

“In the last four years, white supremacists and far-right militias have engaged in public violence, and have made public statements about their intent to do so,” said Mike German, a former FBI agent now with the Brennan Center for Justice. “So it’s a little hard for me to understand how the FBI and local law enforcement had no idea that the attack on the Capitol was being planned.”

The government does have more expansive powers – powers that ballooned in the decades since 9/11 – to target Americans it claims are associated with groups designated by the state department as “Foreign Terrorism Organizations”. While the Patriot Act and other post-9/11 authorities did expand the government’s ability to investigate and prosecute domestic terrorism, it has so far avoided extending all of those authorities to domestic groups. That’s in part due to first amendment-related concerns, as the US constitution permits non-violent association with hateful groups.

Advocates also point out how damaging those anti-terrorism powers have been to Muslim-American communities and the rule of law. The “terrorism” label has been used to justify the surveillance of entire communities, mass arrests and deportations, entrapment, harassment, an inflated watchlist system and, of course, the Muslim ban, one of the original sins of the Trump presidency.

“An expansion of domestic terrorism won’t mean more focus on white terrorism,” said Diala Shamas, an attorney with the Center for Constitutional Rights. “When you consider the biases that law enforcement has – with its focus on black political dissent, Muslim political dissent, Palestinian organizing – it’s not far-fetched to imagine that those are the groups that will be disproportionately represented in any so-called domestic terrorism framing.”

Shamas says the concept of terrorism can’t be divorced from its legacy of politicization and abuse. “The caution I urge in using that terminology is because of this acute awareness that it ends up triggering such expansive state action.”

Asad Dandia, a Brooklyn-based community organizer, has first-hand experience with the upheaval the terrorism label can wreak.

When Dandia was a teenager, his charity was infiltrated by an informant working for the NYPD who spent months spying on Dandia, his family and friends, as part of the police department’s notorious, years-long surveillance program of the city’s Muslim communities. Dandia joined a lawsuit against the NYPD in 2013 that settled in 2017 after the NYPD agreed to a series of reforms.

He recently reread the confession the informant posted on Facebook. “I was an informant for the NYPD, for a little while, to investigate terrorism,” it read.

Policymakers are currently considering a number of options. The bill introduced last week calls for the creation of domestic terrorism offices within the FBI and the departments of homeland security and justice, and for increased monitoring and reporting on threats and investigations.

The proposal that has civil liberties most concerned is a bill first introduced in 2019 by the House intelligence chair, Adam Schiff, which would give the attorney general the authority to identify certain crimes as acts as terrorism. Given the aggressive policing and prosecutions of last summer’s racial justice protesters – in just one example, an Indigenous man now faces 10 years in prison for his Facebook posts – they say it’s easy to imagine charges against protesters inflated even more with a terrorism designation green-lit by an unsympathetic attorney general like William Barr.

“In addition to further harming already marginalized communities, these charges could be used to brand as terrorists people who protest against government injustices by engaging in civil disobedience or actions that result in property damage,” the American Civil Liberties Union wrote in a letter opposing that bill.

German charges the FBI with playing a “semantic game” in claiming the US lacks a domestic terrorism law, pointing to the dozens of statutes relating to what the law defines as domestic terrorism. The best way for police to target white supremacist violence, he says, is by rooting out racists within their ranks and enforcing laws that already exist.

Shamas and German both point to the need for a broader reckoning with the reasons the government has historically turned a blind eye to far-right extremism. “In my view, the real problem with white supremacy is the proximity to the state,” says Shamas. “It’s the fact that we have representatives in Congress who are white supremacists, it’s the fact that police departments are being infiltrated by these groups.

“None of that is captured when you say, ‘these are terrorists.’ The relationship with the state gets blurred.”