After the January 6 attack, federal surveillance programs expanded to counter white supremacist violence have made Black and brown communities their main target. 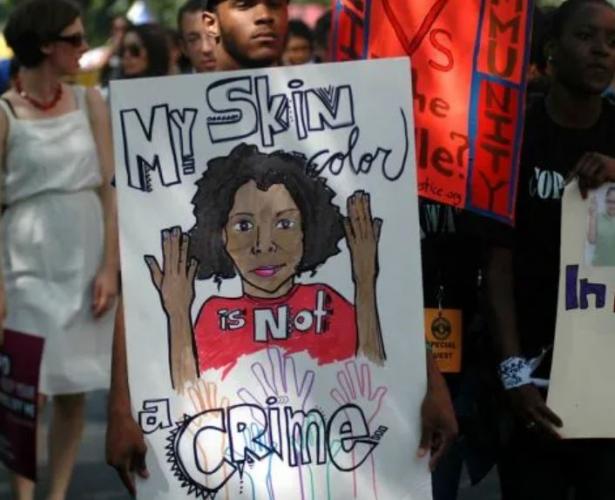 As the January 6 hearings continue, legislators have rushed to show that they are doing something, anything, about white supremacist violence. This includes a failed attempt to pass the Domestic Terrorism Prevention Act after the racist murder of ten Black people in Buffalo, New York. But expanding the counterterrorism complex is not the answer to white supremacist violence—in fact, these measures often wind up reinforcing systemic white supremacy.

After the January 6 attack, the Department of Homeland Security and the FBI added new units and social media monitoring initiatives to supposedly tackle domestic terrorism. These agencies and initiatives refuse to name white supremacy; rather, they use broad categories like racially motivated violent extremism and abortion-related violent extremism, giving cover to them to investigate any ideologies in that range.

The broad, sweeping discretion of counterterrorism programs, in turn, has allowed law enforcement agencies to single out Black, Muslim, and immigrant communities. COINTELPRO, the FBI’s political surveillance program that targeted anti-war and Black Power movements among others during the civil rights era, is one of the most well-known historic examples of this.

After every recent incident of white supremacist violence, DHS has touted its Countering Violent Extremism programming, known as CVE, as a solution.

U.S. counterterrorism measures proliferated in the early days of the War on Terror, an era which kicked off the widespread surveillance and detention of Muslims and Muslim Americans. More recently, the Trump Administration used the FBI’s counterterrorism apparatus to target Black protesters during the Black Lives Matter movement in 2020.

After every recent incident of white supremacist violence, DHS has touted its Countering Violent Extremism (CVE) programming as a solution. CVE is the latest trend in counterterrorism, deputizing individuals to report on their own community using behavioral policing. As evidenced by the daily policing of Black and brown people, encouraging more profiling will only continue to harm communities of color first and foremost.

At the Muslim Justice League, we have organized against the CVE model locally in Massachusetts and supported grassroots campaigns against these programs across the country. In Boston, we successfully ended a program that characterized Somali youth as prone to “violent extremism” and put them through after-school training with the Boston Police Department.

Muslim opposition to the counter-extremism model has been loud and clear since the start, with local wins in cities across the country such as in Minneapolis and Los Angeles. These communities and others targeted by increased state surveillance have responded by organizing at the grassroots level: Project South, a social justice organization based in Atlanta, Georgia, has worked with local mosques and Muslim community spaces in Southern states. This approach has provided communities with the tools to stand together and challenge anti-Muslim surveillance, discrimination, and targeting by the government.

Although President Joe Biden promised to end CVE programs during his campaign, his administration has done the opposite by expanding them to supposedly tackle white supremacist violence. While many reported that the Center for Prevention Partnerships and Programs (CP3) was launched in response to January 6, it simply renames the CVE department that was launched by Obama in 2015, which was already renamed as Targeted Violence and Terrorism Prevention in 2020.

To address white supremacist and white nationalist violence, we have to simultaneously dismantle these systems while working to build up genuine community safety. That means not only opposing expansion of law enforcement powers and the counterterrorism complex, but also creating alternatives on the ground to support real community needs.

Amid abolitionist organizing in Boston, there have been a number of innovative efforts, including community safety teams which are trained in de-escalation and can provide an alternative to police intervention under some circumstances. Activists have also organized community opposition to white nationalist mobilizations, such as counter-protests, pro-actively showing up for events that may be targeted, and conducting local research on their formations.

The expansion of the government’s surveillance powers in the name of counterterrorism has had devastating impacts on communities of color. Broad-based mobilization, safety, and accountability mechanisms that don’t rely on incarceration as the solution are necessary to counter white supremacy and seek justice for Black, Muslim, immigrant, and other communities that have been harmed.

[Azadeh Shahshahani is legal & advocacy director at Project South, and a past president of the National Lawyers Guild.