Sanders, who will oversee the reconciliation process and has voiced skepticism over eliminating the full filibuster, has not offered an opinion on sidestepping a parliamentarian ruling. 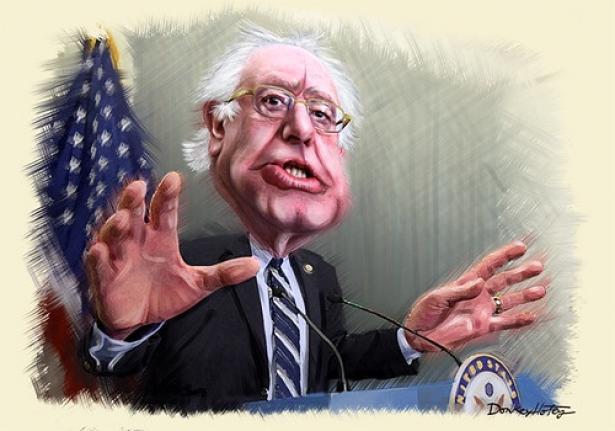 Progressive Democrats are pushing a plan to ignore the Senate parliamentarian if she rules policies such as raising the minimum wage can’t be included in a budget reconciliation package.

Budget reconciliation allows legislation to move through the Senate on a majority vote, and it cannot be filibustered.

As a result, Democrats have been eyeing the budget process to get key items like a $15 per hour minimum wage to President Biden’s desk. Using the process would prevent Republicans from blocking a bill by ensuring one could pass with 50 Senate Democratic votes, and Vice President Harris breaking the tie.

The problem is another Senate requirement known as the Byrd Rule that requires policies like a minimum wage hike to meet certain requirements to qualify under budget reconciliation.

A number of budget experts believe a minimum wage hike might not meet Byrd Rule requirements, and that the Senate parliamentarian could rule that it could not be included in a reconciliation package.

It’s not clear that’s the case.

Bill Dauster, who served as deputy chief of staff to former Senate Majority Leader Harry Reid (D-Nev.), published a Roll Call op-ed this week arguing that the $15 minimum wage bill Biden included in his $1.9 trillion COVID-19 relief plan had a chance to get the parliamentarian’s stamp of approval.

But if the ruling goes against Democrats, he said the party should push it through anyway.

“If the Senate parliamentarian does not advise them that Congress can include the minimum wage in budget reconciliation, Harris or Leahy should exercise their constitutional authority to say that it can,” he wrote.

The suggestions gained steam on the left after centrist Democrats such as Sens. Joe Manchin (W.Va.) and Kirsten Sinema (Ariz.) reiterated their opposition to killing the filibuster, which essentially requires major legislation to win 60 votes to get approval in the Senate.

“I think that the key here is that we're going to keep every tool in the toolbox available,” Congressional Progressive Caucus Chairwoman Pramila Jayapal (D-Wash.) said when asked about the approach, adding she had been in touch with Senate colleagues about the possibility.

Rep. Ro Khanna (D-Calif.), a close ally of incoming Senate Budget Committee Chairman Bernie Sanders (I-Vt.), said Democrats should think big in terms of what can be in reconciliation.

“I personally think we ought to be getting rid of the filibuster, but at the very least we ought to be expanding reconciliation to apply to many more prospects,” he told The Wall Street Journal.

Sanders, who will oversee the reconciliation process and has voiced skepticism over eliminating the full filibuster, has not offered an opinion on sidestepping a parliamentarian ruling. He argues raising the minimum wage would not run afoul of the Byrd Rule.

Democrats used a budget reconciliation package in 2010 to advance the Affordable Care Act, while Republicans used it in 2003 and 2017 to cut taxes.

In each case, the Byrd Rule dramatically affected the final legislation.

For example, elements of both the Bush and Trump tax cuts had a 10-year expiration in order to comply with Byrd Rule deficit requirements. Republican attempts to overturn Obamacare, which ultimately failed, were limited by what provisions were Byrd Rule compliant.

Ignoring Byrd would create a fight with Republicans in the Senate as Biden talks of working with the minority party to move legislation.

GOP senators warn it could set a negative tone for Biden, particularly with a divisive fight over Trump’s second impeachment trial set for February.

“I think you’ve got to be careful that you don’t start off in a very highly partisan way, because between impeachment and a reconciliation bill, particularly one where you ignore the rules of reconciliation, which people are talking about, I think you set a really bad tone, at least for months and maybe for the first term, the first two years at least,” Sen. Rob Portman (Ohio), a retiring Republican who is engaged in negotiations over the COVID-19 bill, said in an NPR interview.

Democrats say they are merely keeping their options open.

“We have to be ready,” Speaker Nancy Pelosi (D-Calif.) said Thursday of teeing up the budget reconciliation bill.

The White House has made it clear it is very open to using budget reconciliation to prevent the filibuster from blocking COVID-19 relief.

“Our priority is on getting it through and not what the parliamentary process is,” White House press secretary Jen Psaki said Friday when asked about the possibility of sidestepping the usual reconciliation rules.

Many Democrats are open to using reconciliation, but ignoring the parliamentarian on the Byrd Rule would be more controversial.

“I hope it doesn’t come to that,” said Sen. Dick Durbin (Ill.), the No. 2 Democrat in the Senate. Democrats, he said, should ensure that any policy in a reconciliation bill could survive a Byrd Rule challenge, but hinted at some flexibility in the approach.

“In the past the Republicans have changed some of the rules relative to reconciliation to accommodate their legislative efforts,” he said.

House Budget Committee Chairman John Yarmuth (D-Ky.) said the move could open a can of worms Democrats would live to regret.

“I’m not sure it’s the smartest thing to do,” Yarmuth told Politico.

If Democrats push through a minimum wage hike, or decide to use the same procedure to pass voting rights legislation, health care reform, or environmental policy, Republicans could take the same approach when they’re in power.

“You do have to worry about precedent,” Yarmuth said.

Niv Elis is a reporter at The Hill, focusing on federal spending and economic issues. Prior, he spent five years reporting from Israel on business and economics for The Jerusalem Post, as well as hosting the JPost Podcast. A graduate of Wesleyan University and the Johns Hopkins School of Advanced International Studies (SAIS), Niv's expertise lies in economics, public policy, conflict management and Middle East affairs. He has published articles with The Financial Times, Forbes, The Washington Post, The Christian Science Monitor, Moment Magazine and the Institute for Counter-Terrorism.